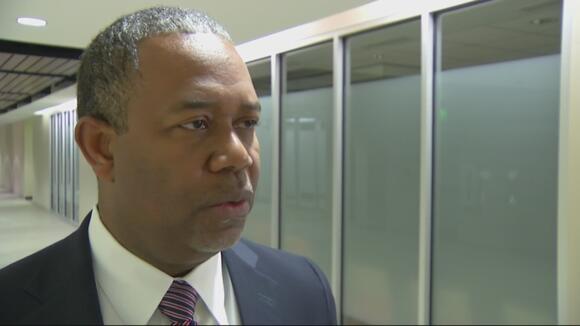 “It’s a disservice to past and future mayors to allow the office to be demeaned and tarnished,” said Young.

Davis coming under fire for use of city credit cards and violating state campaign finance laws.

“I think there is enough out there, and it’s in the public domain I think the allegations  need a thorough airing that is an appropriate forum to do it, it’s a credible forum, they have the authority to do it,” said Young.

Sheriff Roundtree makes a statement about the uptick in local homicides

Young going public with his call for a special grand jury speaking to the Lions Club.

“There is no deadline, on accountability in government people’s feet have to be held to the fire let the chips fall where they may,” said Young.

Young saying this would be a civil grand jury investigation not criminal so instead of issuing an indictment it would issue a presentment,

“If there is evidence of crime in the presentment that it can be forwarded to the appropriate law enforcement agency for further review,” said Young.

Young says he has had no response from Judge Craig on his call for a Davis special grand jury.

“Former Mayor Young is now a private citizen, and, as such, he is free to offer his opinion to Chief Judge Craig.  However, he is no longer Augusta’s Chief Executive and therefore lacks the authority to call for a Grand Jury investigation as he previously did regarding the Augusta Fire Department.

I suspect that you are aware that Judge Craig and the judges of the Richmond and Columbia judicial circuits (based upon applicable legal authority) have recused themselves from participating in matters involving the Office of the Mayor and me.

I am confident that the Court will continue to comply with applicable law and take every precaution to prevent the Court from being dragged into political issues and decisions.

Public funds have already been expended to conduct an audit and investigation by Augusta Accounting firm Serrotta Maddox and Evans.

Moreover, this issue continues to be discussed by the City’s elected leaders.  I believe that it would not be wise for the Court to insert itself into this discussion and may only lead to a further loss of confidence in our judiciary.” Keona Shaw on behalf of Mayor Davis.

RICHMOND COUNTY, Ga. (WJBF) – An investigation is underway after a man was found dead with at least one gunshot wound. Authorities say at approximately 1:24pm, Richmond County Sheriff’s Office Deputies responded to a vacant building on the 3400 block of Meadowbrook Drive for a call about a deceased unidentified black male. CID and the […]
AUGUSTA, GA・2 HOURS AGO
WJBF

Augusta, Ga. (WJBF)- As many in the country watched the spy balloon drop on TV, a former Augustan saw it LIVE at his house. Video was shot by Brian Bolgla who now lives in Myrtle Beach. He was standing in his driveway watching it unfold. He describes to WJBF’s Barclay Bishop what he saw and […]
AUGUSTA, GA・1 DAY AGO
WJBF

Neighbors in McCormick County to protest over not receiving mail

AUGUSTA, Ga. (WJBF) – A community in McCormick County is planning a protest. They say their mail service is about to be cut off.  Neighbors in Savannah Lakes Village – a mostly senior citizen community- might stop getting mail on February 10. “Can you imagine?” asked Gerry Goldstein, a Savannah Lakes Village resident. “We have […]
MCCORMICK COUNTY, SC・2 DAYS AGO
WJBF

COLUMBIA COUNTY (WJBF) – Columbia County Sheriff’s Office is requesting the public’s help in locating a wanted man. Deputies are in the area of Harlem towards McDuffie County searching for a white male: Richard Dahlheimer, aged 42. He currently has numerous warrants including entering autos and burglaries. Thursday night, Dahlheimer fled from law enforcement in […]
COLUMBIA COUNTY, GA・2 DAYS AGO
WJBF

An investigation is underway after a man was found dead in a room at the Motel 6 on Boy Scout Road in Augusta.
AUGUSTA, GA・3 DAYS AGO
WJBF

In May, commissioners approved $500,000 for repairs at Diamond Lakes to get the bathrooms re-open. Money has been spent but so far, no fixes.
AUGUSTA, GA・3 DAYS AGO
WJBF

Investigators have arrested a man in a crash on Olive Road that killed a bicyclist.
RICHMOND COUNTY, GA・2 DAYS AGO
WJBF

GROVETOWN, Ga. (WJBF) — The Columbia County Chamber of Commerce hosted its Annual Meeting Thursday, Feb. 2 at the Columbia Country Exhibition Center. One of the highlights of the evening was the presentation of the Lifetime Achievement Award to Yvonne Meeks, from Evans. This prestigious award was first given in 2005 and recognizes one leader […]
COLUMBIA COUNTY, GA・1 DAY AGO
WJBF

SALUDA COUNTY, S.C. (WJBF) — One person is dead following a crash in Saluda County. Troopers say the incident happened on SC 23 near Dickert Drive, approximately 3.2 miles west of Batesburg, on Sunday, February 5. The driver of a Chevrolet Impala was traveling south on SC 23 when the person drove off the right […]
SALUDA COUNTY, SC・13 HOURS AGO
WJBF

WARRENVILLE, S.C. (WJBF) – Aiken fire crews are on Railroad Street in Warrenville for a home engulfed in flames. According to authorities, the emergency call came in about 6:45 Friday morning. They tell NewsChannel6 that other nearby homes are also in danger. No word on injuries or how the fire began. Police say this is […]
WARRENVILLE, SC・2 DAYS AGO
WJBF

The beloved White Columns Inn that used to be an attraction for near and far travelers in Thomson is gone. The demolition happened last week after it was announced in October 2022.
THOMSON, GA・2 DAYS AGO
WJBF

FORTUNE 500 company Leidos is lending its expertise to the growing cyber security community of Augusta by expanding its operation in the CSRA to the Georgia Cyber Center.
AUGUSTA, GA・1 DAY AGO
WJBF

Groundhog Day. That means for many watching the movie, but Augusta has its own time loop where the same thing happens over and over.
AUGUSTA, GA・1 DAY AGO
WJBF

AUGUSTA, Ga. (WJBF)- “At least 27 of our students every other day is a national job shadowing day because we have students who are involved in work based learning opportunities all school year so they get an opportunity to do that full-time as students here at our school.” said Kyshone Hunter, Richmond Co. Technical Career […]
RICHMOND COUNTY, GA・2 DAYS AGO
WJBF

AUGUSTA, Ga. (WJBF)- “So the homeless task force just concluded its point in time count that we do every year to make sure that we know exactly where our brothers and sisters are located so that we can help them get services. But one of the biggest things that have came out of our task […]
AUGUSTA, GA・3 DAYS AGO
WJBF

An inside look at Columbia County’s Performing Arts Center

The Columbia County Performing Arts Center has been around since May of 2021, and they host a variety of events from Broadway, concerts, to local benefits.
COLUMBIA COUNTY, GA・2 DAYS AGO