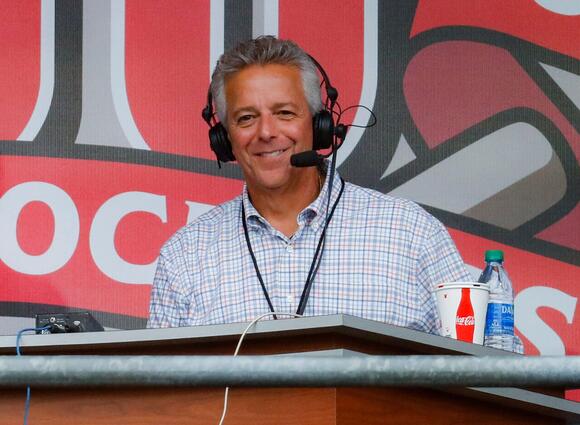 In 2020, the league was designated a "Partner League" of Major League Baseball.

"I can’t even begin to tell you how excited I am to be a part of this," said Brennaman, per pioneerleague.com . "We're going to be on the cutting edge of how live sports, particularly baseball, needs to be re-packaged in order to attract new fans. For me personally, this is a great opportunity to give something back to help assure the future of the game."

More from the league's release:

The PBL Roundup Show will stream each Wednesday night of the PBL season (see schedule below) on pblnetwork.com, pioneerleague.com and the Pioneer League team websites. The format of The PBL Roundup Show will include insider baseball commentary, analysis, comedy, special baseball and entertainment industry guests and unique in-game, first-hand perspectives from players, coaches and fans. Live cut-ins to each of the PBL games that night will be featured.

In addition to Brennaman, The PBL Round Up Show will be co-hosted by famed comedian Joe List.

The third co-host, Bill Bavasi, brings a wealth of baseball experience having served as General Manager of both the Mariners and Angels, farm director of the Dodgers, VP of Player Development and Scouting for the Reds and, recently, the general manager of MLB’s Arizona Fall League.

Brennaman appeared in Nov. 2021 on the podcast of former Sacramento Kings broadcaster Grant Napear, "If You Don't Like That With Grant Napear," and suggested that he's seen and heard enough of the criticism of his on-air apology in 2020 for using a homophobic slur , which included a Nick Castellanos home-run call.

During a sportsbroadcastjournal.com interview with David J. Halberstam in Sept. 2021 , Brennaman talked about calling high school football games and hosting a podcast as he's done since losing his jobs calling Reds games in addition to NFL games for Fox.

In July 2021, Brennaman appeared on "The Josh Potter Show" and discussed a number of subjects, including being able to accept people's jokes about the now-famous "drive into deep left field by Castellanos" call he made while apologizing.

Reds first baseman Joey Votto said he was tired of no one hitting the Toyota Tundra with a home run for a fan to win the truck at Great American Ball Park. So he decided to make things interesting. Votto, a guest in the Bally Sports Ohio broadcast booth with...
CINCINNATI, OH・1 DAY AGO
Cincinnati.com | The Enquirer

It’ll be six months. Six long, depressing, losing months. Tuesday, Oct. 4, will be just about six months since we heard those six words that really set the tone for the entire season: "Well, where are you gonna go?" said Cincinnati Reds COO Phil Castellini. It was before the...
CINCINNATI, OH・2 DAYS AGO
Cincinnati.com | The Enquirer

A VIP experience: What it's like to attend a Bengals game as a special guest

Andy Bernard in “The Office” once said he wished there was a way to know you’re in the good old days before you leave them. Cincinnati Bengals fans are currently experiencing those days, but many understand that. You can feel it in the city. Walking Downtown on game day is a different vibe than...
CINCINNATI, OH・2 DAYS AGO
Cincinnati.com | The Enquirer

The Cincinnati Reds are forecast to lose 100 games by the website FiveThirtyEight, marking only the second time in 141 seasons that the team would have suffered that many losses. The Reds, which have lost 21 of their last 30 games, currently are on a six-game losing streak. They finish...
CINCINNATI, OH・2 DAYS AGO

When Alexis Díaz entered spring training, he was considered a longshot to make the big-league roster out of camp. He had a stellar 2021 season in Double-A, but he was a relative unknown. He didn’t show up at the top of the Cincinnati Reds’ prospect rankings. If anything, he was most known as Edwin Díaz’s younger brother.
CINCINNATI, OH・11 HOURS AGO
Cincinnati.com | The Enquirer

FOCO announced that bobbleheads of Cincinnati Bengals quarterback Joe Burrow, receiver Ja'Marr Chase and running back Joe Mixon wearing the White Bengal Tiger uniforms they debuted during their Thursday Night Football win against the Miami Dolphins and holding their white helmets are available for pre-order. The bobbleheads are numbered out...
CINCINNATI, OH・2 DAYS AGO
Cincinnati.com | The Enquirer

TJ Friedl impressed in his latest stint in the big leagues, firmly in the Cincinnati Reds’ outfield mix for spring training next year, but his season came to a disappointing end. Friedl exited Monday’s game against the Chicago Cubs in the third inning after injuring his right hamstring as...
CINCINNATI, OH・2 DAYS AGO
BearDigest

Jerry Vainisi was the Bears GM during their Super Bowl victory and worked for the organization in different capacities for 15 years.
CHICAGO, IL・27 MINUTES AGO

Thumbs down: Reds' dismal 2022 season one to forget

Editor's note: Thumbs up/Thumbs down are short editorials that celebrate successes across our region and call out those who stand in the way of progress. Burrow: 'Everyone has a responsibility to do good'. Joe Burrow is proving himself to be a quality leader on the football field and in the...
CINCINNATI, OH・2 HOURS AGO
Cincinnati.com | The Enquirer

Mike Boone, a former University of Cincinnati Bearcats running back, could see more playing time than he's seen so far in parts of two seasons with Denver after Broncos RB Javonte Williams suffered a season-ending knee injury in Sunday's loss to the Las Vegas Raiders. Boone had his first three...
DENVER, CO・2 DAYS AGO
Cincinnati.com | The Enquirer

The Cincinnati Bengals' new indoor facility is getting a name. The naming rights for the temporary indoor facility were recently acquired by Integrity Express Logistics, an international logistics company based in Cincinnati. It will be a multi-year partnership. The new facility is scheduled to be completed by November. Earlier this...
CINCINNATI, OH・2 DAYS AGO
Cincinnati.com | The Enquirer

The injury to Tua Tagovailoa was truly hard to watch. It was even made more serious considering the hit he took four days earlier, Sept. 25, against Buffalo. Why was he on the field?. The NFL continually tries to convince its fans that player safety is their number one priority,...
NFL・2 HOURS AGO

As the Cincinnati Reds sit on the brink of a 100-loss season, which has happened only once in franchise history, they held off the dubious distinction with a comeback victory in the penultimate game of the year. Two innings after rookie catcher Chuckie Robinson hit a game-tying, two-run homer, rookie...
CINCINNATI, OH・1 DAY AGO