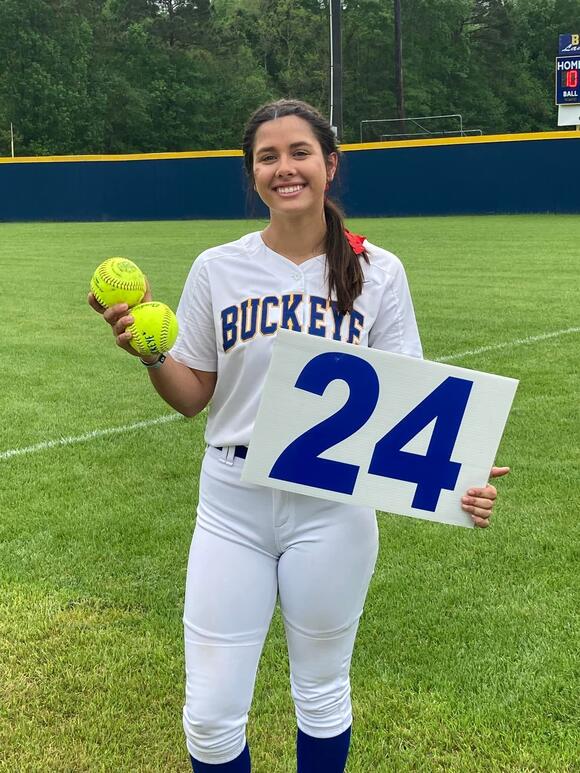 Buckeye senior softball player Alexis Smith is the Town Talk's athlete of the week for April 11-17.

Smith is the second Buckeye softball player to win Athlete of the Week this school year — joining Olivia Henry, who won for the week of Feb. 28-March 6.

Below are the final results of the poll.

Polls for the Town Talk's athlete of the week open each Monday morning and will remain open until noon Thursday. You can vote as many times as you'd like.

Any nominations for Athlete of the Week or our weekly top performers list can be e-mailed to lgafford@thetowntalk.com .

Cole Dauzat, Oakdale: Dauzat won a pair of events at Rosepine’s E.A. Phelps Memorial Relays with a jump of 20 feet, 7 inches in the long jump and a jump of 44-0 in the triple jump.

Ethan Frey, Rosepine: Frey, an LSU baseball signee, had his second three-home run game of the season on April 12 against DeQuincy to highlight a 4-for-6 week. He also struck out 10 batters in a win over DeQuincy on April 14.

McKenna Howell, Grant: Howell no-hit North Webster in the first round of the playoffs and struck out nine, as well as hitting a triple and home run in an 11-0 win.

Jordan Dunbar, Avoyelles Charter: Dunbar won 48 of 49 games in the Region 2-IV tennis tournament April 13 — winning all four of her matches in straight sets to finish as regional champion.

Desi Robinson, Natchitoches Central: Robinson highlighted a 3-for-4 performance with two home runs and three RBIs in a 6-1 win over Pineville on April 12.

Alexis Smith, Buckeye: Smith hit two home runs and drove in three RBIs, while also adding in a double in a first round win over Crowley on April 16.

Parker Stroud, Country Day: Stroud tossed a no-hitter and struck out 12 in a 5-2 win over Glenmora on April 11.

Hunter Tucker, Winnfield: On April 14, Tucker hit a triple and a home run, while driving in three runs in a 6-1 win over Calvin. The following day, his go-ahead two-run home run in the sixth inning secured a 6-5 win over Many.

Kanyon Wright, Grace Christian: Against Peabody and Oak Hill, Wright had 10 RBIs to lead the Warriors to a pair of wins. In the Oak Hill game on April 15, he had four hits.