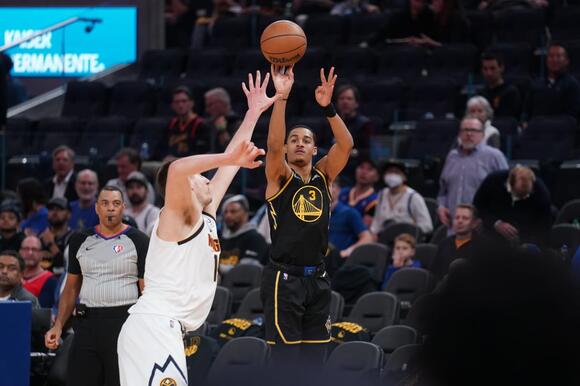 Jordan Poole had never seen a postseason game until Saturday night but it sure didn't seem like it.

Jordan Poole finished the regular season by carrying the Golden State Warriors to a playoff berth for the first time in two years.

Saturday night in the 22-year-old’s postseason debut, the Warriors’ third-year guard picked up right where he left off by leading Golden State to a 123-107 win over the visiting Denver Nuggets. With 30 points, Poole is just the third Warriors player in franchise history to reach that mark in his first playoff game.

Over the course of the last month of the regular season, Poole, who has been starting at point guard in place of the injured Stephen Curry has, in turn, produced Curry-like numbers. Shooting 43-percent from beyond the arc, Poole also averaged 25.5 points in his last 10 games, matching the output of Curry.

On Saturday, Poole’s production was nearly identical to this showing. On top of scoring a game-high 30 points, the Michigan product sank 5 of his 7 attempted three-pointers and shot 9-for-13 from the floor.

“Just being patient, looking at the coverages and seeing how they are guarding me,” Poole said when asked how his game developed Saturday. “Playing within our offense and just trying to be as locked in as possible when I get open looks.”

Starting in place of Curry, who made his return to the floor Saturday night — albeit off the bench — Poole’s patience was evident. While he took a back seat in the opening quarter from a scoring perspective, Poole let his jump shooting do the talking, knocking down triples from as far as 30 feet away from the basket.

While Curry will logically be placed back into the starting lineup as he gains his conditioning and pace of the game once again, Poole is trying to make the most of his minutes no matter where they come.

“Just try to make the most of my opportunity when I’m out there,” Poole said. “Just continue to be aggressive and play my game and with all my teammates. Coaches tell me just to be me within the offense and really just try to help us win a game. Games change all the time, you’ve got to be ready.”

The Phoenix Suns will face the Denver Nuggets on Christmas Day, sources confirmed to The Arizona Republic's Duane Rankin. The Athletic's Shams Charania reported the NBA's Christmas Day schedule on Sunday, with the Suns playing the Nuggets in Denver as part of the schedule. Charania also reported that the Milwaukee Bucks would play at...
PHOENIX, AZ・24 MINUTES AGO
Inside The Warriors

Draymond Green Explains his Arguments with Steph and Klay

Draymond Green has a unique personality so it's not surprising that sometimes it rubs his teammates the wrong way
SAN FRANCISCO, CA・1 DAY AGO
Inside The Warriors

Ja and Draymond are excited for Memphis Grizzlies vs. Golden State Warriors on Christmas
SAN FRANCISCO, CA・1 DAY AGO
Inside The Warriors

KC goes to work getting closer to the league's 85-man roster requirement by Tuesday.
KANSAS CITY, MO・27 MINUTES AGO
Inside The Warriors

The Golden State Warriors will get their rings in front of the Los Angeles Lakers
SAN FRANCISCO, CA・1 DAY AGO
Inside The Warriors

Kevin Durant Reacts to Complicated Legacy With Warriors and Nets

Kevin Durant isn't phased by what people think.
SAN FRANCISCO, CA・17 HOURS AGO
Inside The Warriors

#The Golden State Warriors
All Seahawks

Which two players "got beat around," according to Carroll?
SEATTLE, WA・40 MINUTES AGO