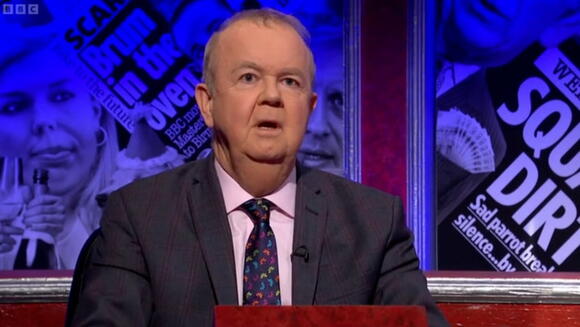 Ian Hislop was met with cheers on Have I Got For You as he said that the “entire Tory party” should resign for defending Boris Johnson amid the partygate scandal.

This week, the prime minister and chancellor Rishi were given fines for breaking lockdown to attend illegal parties at Downing Street.

Johnson is the first sitting prime minister ever found to have broken the law. Johnson’s wife Carrie was also fined.

Appearing on HIGNFY on Friday (15 April), Hislop pointed out that voters had previously been told it was too soon to call for Johnson’s resignation before the Sue Gray report was released, and now were being told it was “too late”.

“He thinks everyone has forgotten about it and that they don’t care anymore,” Hislop said, curling his lip as he added: “Maybe by the time we go out, the party will have come to its senses and he will have resigned.”

“We’ve got another six parties to go. All the attention’s on this one and everyone’s going, ‘Oh god, woke BBC lefties, can’t you get over it?’ 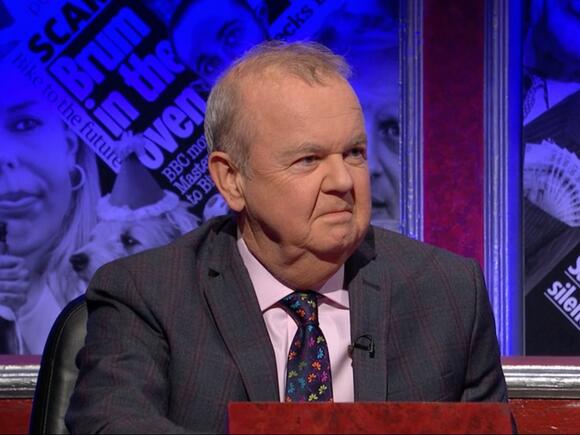 Justice minister Lord Wolfson quit the government in protest at the prime minister’s failure to resign over breaking the law, saying the “repeated rule-breaking and breaches of the criminal law” in Downing Street could not be allowed to be treated with “constitutional impunity”.

Hislop continued: “He’s resigned. Why hasn’t Boris? Why hasn’t Rishi? Why hasn’t Carrie? Are you allowed to resign as his wife?

‘And why hasn’t the entire Tory party resigned, all of them? They supported him, why don’t they leave now? They’re the party of law and order.”

While Johnson and Sunak have apologised and paid their fixed penalty notices, it is yet to be seen if they will resign.

A number of celebrities have backed calls for the prime minister to step down, including Dan Stevens.

The Downton Abbey star elicited gasps from presenters on The One Show as he seemed to discuss his new show Gaslit , describing “a criminal for a leader who is wrapped in a messy war, embroiled in a stupid scandal and surrounded by ambitious idiots and really should resign”.

“No, I’m sorry that’s the intro to Boris Johnson,” he then added.

The mystery of a missing mother-of-two who disappeared while walking her dog has captured the nation’s attention, with no hint of an answer in sight. Nicola Bulley vanished on a riverside path in Lancashire nearly two weeks ago, and now a man dubbed the ’Human Mole’ is hoping to help find out what happened. Forensics expert Peter Faulding joined the search for Ms Bulley this week, after raising concerns about the police theory she slipped and fell into the River Wyre. The founder and CEO of Specialist Group International has not been shy in his criticism, describing the probe...
9 HOURS AGO
The Independent

Donald Trump has used his Truth Social account to amplify a baseless claim suggesting Florida governor Ron DeSantis “groomed” underage girls decades ago when he was a high school teacher.On Tuesday, Mr Trump responded to a post from a user showing a low-quality photo of a man with a resemblance to Mr DeSantis standing with a group of young women with blurred faces, one of whom appears to be holding a beer bottle.“Here is Ron DeSanctimonious grooming high school girls with alcohol as a teacher,” a caption on the user’s post reads.Mr Trump reshared the unverified image to his...
FLORIDA STATE・5 HOURS AGO
The Independent

Mr Trump posted an astonishing 48 Truth Social posts over the course of Mr Biden’s State of the Union address.The speech lasted about one hour and 13 minutes, meaning Mr Trump shared a post every 90 seconds on average.The former president boasted about his commentary performance on Wednesday morning, claiming “millions and millions” of people tuned in to hear what he had to say.“Big night for ‘TRUTH’ last night. Tremendous numbers of people signed on to hear my ‘Play by Play’ of the SOTU Speech…Like I mean Millions and Millions of people, and TRUTH handled the Traffic well,” he...
FLORIDA STATE・4 HOURS AGO
The Independent

A damning New York Times profile claims Democrats around Washington have “lost hope” in Kamala Harris, raising doubts that she’d be valuable on the 2024 ticket as either a presidential or vice-presidential candidate.“I can’t think of one thing she’s done except stay out of the way and stand beside him at certain ceremonies,” John Morgan, a prominent fund-raiser for Democrats, told the paper.Former Secretary of State Hillary Clinton privately expressed the belief that Ms Harris couldn’t win a primary race in 2024, though Ms Clinton denied this, according to the profile.“Even some Democrats whom her own advisers referred reporters...
GEORGIA STATE・1 DAY AGO
The Independent

“Nothing is off the table” when it comes to the question of providing fighter jets to Ukraine, the Prime Minister has said.Rishi Sunak, speaking during a joint press conference with Ukrainian President Volodymyr Zelensky, said sending warplanes was “part of the conversation” between the pair.His comment comes after Downing Street confirmed on Wednesday that the Prime Minister had asked Defence Secretary Ben Wallace to investigate what jets the UK could potentially give to Ukraine in its struggle against invading Russian forces.No 10, to mark Mr Zelensky’s surprise visit, announced in the morning that Britain would start training Ukrainian air force...
2 HOURS AGO
The Independent

Volodymyr Zelensky hugged a reporter from BBC Ukraine as he took questions alongside Rishi Sunak on Wednesday.“Greetings Mr President, I would really like to hug you, but I’m not allowed,” the correspondent said to Mr Zelensky.“Why not, please, do give me a hug,” the Ukrainian leader responded, stepping off stage to embrace her, as others applauded.The journalist then asked Mr Sunak if he thought the UK’s decision to send military jets to the war-torn nation was taking “too long”.Click here to sign up for our newsletters. Read More Ukraine war’s heaviest fight rages in east - follow liveWhy did Russia invade Ukraine and what could happen next?
4 HOURS AGO
The Independent

Democratic US Rep Alexandria Ocasio-Cortez criticised Twitter for its refusal to permanently suspend an influential account linked to anti-LGBT+ smears and threats of violence, including bomb threats at children’s hospitals.During a House Oversight Committee hearing on 8 February, the New York congresswoman questioned former executives at the social media platform why “Libs of TikTok” was allowed to falsely suggest that Boston Children’s Hospital was performing hysterectomies on transgender children, claims that allegedly fuelled threats and harassment towards the hospital and its staff.Ms Ocasio-Cortez asked Twitter’s former head of safety Yoel Roth why the account was not suspended “despite inspiring...
3 HOURS AGO
The Independent

Stephen Fry has said the NHS is “under threat” from “covert privatisation” and is concerned the health service will use private companies to deliver care.The comedian and presenter, 65, added his voice to public ownership campaign group We Own It, who have criticised outsourcing in the healthcare service.In a video released by the group’s Twitter page on Wednesday, Fry said: “We own it. It’s ours. The NHS belongs to us. Our grandparents, great-grandparents, parents, and we ourselves made it what it is. We contributed to it, we paid for it, we believe in it.💥The move toward covert privatisation has already...
4 HOURS AGO
The Independent

Prince Harry has called for more support for children across the UK in his first charity video since the release of his autobiography, Spare.Speaking on behalf of WellChild, a UK-based children’s charity of which the prince has been a patron since 2007, Harry called for help in easing the “tremendous pressure” families face to support their children.The Duke of Sussex asked people to consider nominating “someone you know” for a WellChild award, in an attempt to “grow the WellChild family”.“I look forward to meeting the award winners and spreading awareness about this incredible charity, he added.Click here to sign up for our newsletters. Read More 'Older woman' who took Prince Harry's virginity details 'passionate wham-bam' behind pubHarry and Meghan may attend King Charles' coronation for one personNew King Charles III stamp unveiled at London postal museum
11 HOURS AGO
The Independent

A former Irish premier has rejoined the political party he once led.Bertie Ahern led Fianna Fail from 1994, and served as Taoiseach from 1997.He led Ireland during the peace talks across the Irish border in Belfast, working with then-UK prime minister Tony Blair as the Belfast/Good Friday Agreement was signed in 1998.But Mr Ahern resigned from Fianna Fail in 2012 following a report from a tribunal.The Mahon Tribunal, which looked at allegations of planning corruption, did not find Mr Ahern to be corrupt but said he did not “truthfully account” for money he lodged to his bank account.Last September, the...
3 HOURS AGO
The Independent

A review calling for the UK’s counterterror programme to focus more on Islamism rather than the far right and other threats could make “Britain less safe”, critics have said.William Shawcross, a former Charity Commission head with close ties to the government, said the Prevent programme should be “recalibrated” to reflect that “the most lethal threat in the last 20 years has come from Islamism”.But more suspected far-right extremists are currently referred to the intervention scheme than Islamists, and the number of incels has also been rising after the head of MI5 warned terrorism was “evolving” in the UK.“Prevent must return...
3 HOURS AGO
The Independent

The Government’s anti-terror Prevent programme needs “major reform” and must focus on security, “not political correctness”, the Home Secretary said.Suella Braverman told MPs the scheme – which aims to stop people turning to terrorism – needs to “better understand the threats we face and the ideology underpinning them”.Her comments came after a long-awaited report, published on Wednesday, made 34 recommendations for an overhaul of Prevent.Led by ex-Charity Commission chairman William Shawcross after being ordered by former home secretary Priti Patel in 2019, the assessment found Prevent was “out of kilter with the rest of the counter-terrorism system, and the UK...
4 HOURS AGO
The Independent

The UK is mulling the idea of using frozen Russian assets to help pay for the rebuilding of war-torn Ukraine, Rishi Sunak hinted as the nation’s president, Volodymyr Zelensky, visited London.An independent foundation is being set up to collect sanctioned Russian assets, the Prime Minister told MPs.The UK is working with allied countries to see if it can legalise using those assets to help foot Ukraine’s massive reconstruction bill, he said.We’re currently working with international partners through the legal process to use those assets to fund Ukrainian reconstructionRishi SunakMr Sunak welcomed Mr Zelensky to Downing Street on Wednesday during the...
5 HOURS AGO