Should George Wythe High School focus on arts or STEM? Weigh in. 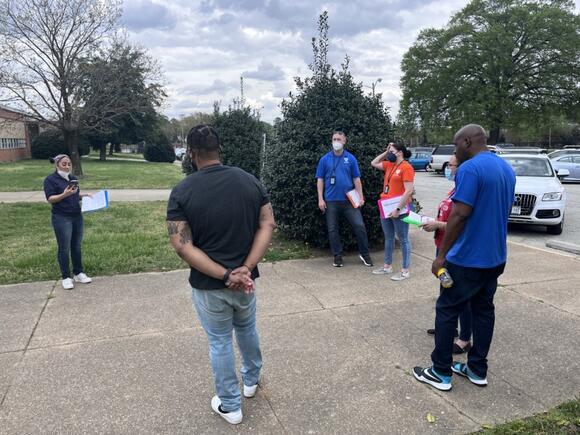 RICHMOND, Va (WRIC) — For generations of families who took classes at George Wythe High School, building a new school has been a long time coming.

A door-knocking campaign by Richmond School Board representatives aims to help the school board decide what kind of learning environment may be instituted.

Three groups of people set out Thursday afternoon to homes of current school students and middle schoolers who could have input on the new George Wythe High.

RPS is collecting community input on whether the school’s objectives will aim to enrich children in the arts or STEM, which focuses on science, technology, engineering and math.

Just this week, the Richmond School Board accepted what Mayor Levar Stoney called a “final offer” to start construction planning; including scope and design. The mayor’s office and school board have battled for years about who should bear responsibility to build a school.

The contention became more heated after a city audit found that Richmond City Hall was spending more than the state average — and more than what Chesterfield spent — to build schools.

While canvassing door to door while speaking in English and Spanish, Chasity Rodriguez, the RPS Southside family engagement coordinator, said the families they are looking for “are often families that, for one reason or another, can’t make it through work hours to really engage, and get the information that we offer. So bringing the information to them, they typically find extremely helpful.”

RPS plans to canvass the Manchester neighborhood Friday, and host an in-person engagement meeting at the Southwood Resource Center from 4-5 p.m.

Richmond City Council is expected to vote on Stoney’s proposal on April 25. If approved, the city will transfer $7.3 million to begin work for the school’s construction.

Input from Richmond Public School teachers could lead to a change in the division's reading curriculum for kindergarten through eighth grade.
RICHMOND, VA・16 HOURS AGO
WRIC - ABC 8News

Richmond's temporary plan to fill the former Lee Circle was approved despite a recommendation that it be rejected.
RICHMOND, VA・13 HOURS AGO
WRIC - ABC 8News

Petersburg City Public Schools recently held a new series of events that gives parents a chance to dine with their kids at school.
PETERSBURG, VA・2 DAYS AGO

The results of a new housing study are clear, and they paint a grim picture not only for aspiring homeowners. Richmond, Henrico and Chesterfield are increasingly split between wealthy enclaves and private investors, with little room left for working-class homeowners.
RICHMOND, VA・1 DAY AGO
WRIC - ABC 8News

Richmond and Henrico both have medium COVID-19 community levels, and Chesterfield now has been deemed to have low COVID-19 levels according to a Center for Disease Control announcement.
RICHMOND, VA・1 DAY AGO
WRIC - ABC 8News

Contract with Urban ONE terminated, casino on hold

Plans for a casino in Richmond are officially on hold after the city's contract with Urban ONE was terminated.
RICHMOND, VA・9 HOURS AGO
WRIC - ABC 8News

In the year-plus since marijuana was legalized in Virginia, law enforcement agencies have taken a variety of approaches to deal with the impact of the substance on employment policies.
VIRGINIA STATE・15 HOURS AGO
WRIC - ABC 8News

This week, the Centers for Disease Control and Prevention reported that Richmond City and Henrico County have low COVID-19 Community Levels for the first time in weeks.
HENRICO COUNTY, VA・2 DAYS AGO
WRIC - ABC 8News

Guests will learn what makes the animals unique, discover their individual stories and learn ways to best help protect their wild habitats. The events are open to children ages five and up.
CHESTERFIELD, VA・19 HOURS AGO
WRIC - ABC 8News

‘I was shocked and disturbed’: Henrico’s India K’Raja restaurant vandalized

Richmond residents were left in shock this morning after flames shot through the roof of Ashton Square Apartments.
RICHMOND, VA・1 DAY AGO
WRIC - ABC 8News

Virginia remains under a State of Emergency as the remnants of Ian bring rainfall, flooding and wind to parts of the state. For state agencies, storm preparation is shifting to response.
VIRGINIA STATE・3 DAYS AGO
WRIC - ABC 8News

As severe weather arrives in Richmond, the City is taking precautions to ensure the safety of all residents. A temporary inclement weather shelter will be opening in Church Hill.
RICHMOND, VA・3 DAYS AGO
WRIC - ABC 8News

Deadly Clarkson Road house fire in Richmond classified as accidental, no cause determined

Richmond Fire Department officials tweeted today that they still do not know the cause of the blaze of the house fire in the 1500 block of Clarkson Road, which took the life of Robert Mallory, but it was not set intentionally.
RICHMOND, VA・14 HOURS AGO
WRIC - ABC 8News

With a suitcase in hand, Jerry Silva of the Virginia Red Cross is headed down to Florida to help with the aftermath of Hurricane Ian.
VIRGINIA STATE・2 DAYS AGO
WRIC - ABC 8News

PHOTOS: ‘Dachtoberfest’ comes to Richmond with dozens of dachshunds

Henrico police are seeking a suspect in connection to a restaurant vandalism incident that occurred in the county's west end.
HENRICO COUNTY, VA・15 HOURS AGO
WRIC - ABC 8News

Winds are expected to increase in speed to 15-25 miles per hour this afternoon and evening, with stronger gusts possible. A total of one inch of rain is expected in the Richmond area today, and the temperature is expected to stay low with highs in the low-60s.
RICHMOND, VA・1 DAY AGO