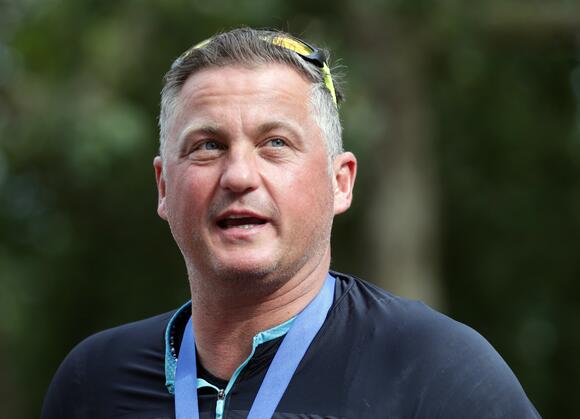 Yorkshire started their 2022 season on Thursday as the opening day of their County Championship fixture against Gloucestershire at Bristol got underway.

Interim managing director of cricket Gough was present as Yorkshire took to the field for the first time since their handling of Azeem Rafiq’s allegations of racism and bullying was widely criticised.

Yorkshire chair Lord Patel has overseen sweeping reforms after being parachuted into the post and 16 members of staff, including first-team head coach Andrew Gale and director of cricket Martyn Moxon, were removed from their roles.

“I was shell-shocked myself when I took over,” said Gough, who quit his role as a talkSPORT presenter to return to his former club in December.

“I have never seen players as down. They had seen their friends sacked.

“Some of them had been at the club a long time. They were upset. I understand that.

“They still have questions they want answering. It is going to be difficult during the season.

“We are giving them an opportunity to play cricket. That’s what they have to do. Get out there and express their skills and play cricket for Yorkshire, the greatest cricket club in the land.”

Rafiq’s revelations on the abuse he suffered at Yorkshire across two spells between 2008 and 2018 shook the county, and English cricket, to its core.

Several sponsors, including Nike, Yorkshire Tea and Emerald Publishing, cut ties with Yorkshire and they were stripped of staging England games at Headingley after their initial handling of Rafiq’s allegations.

The opportunity to host England matches has since been restored after structural reforms were approved by club members, a decision which Lord Patel saluted as “an overwhelming vote for positive change”.

“But it is important that we make cricket in general more understanding of what it has been through in the past few years.”

Gough was in India last week as Yorkshire sealed a two-year deal with the aptly-named Clean Slate Studioz.

The India-based global streaming platform will serve as Headingley’s title sponsor, and Gough is excited about the future of the club.

He said: “I love the club, I care about the club. It was in a situation that needed someone the players knew and could relate to – and would trust very quickly.

“It was important for the members that it was someone they knew and it was difficult for me because I knew all the people who lost their jobs.

“I have huge empathy for them because some of them were close friends, still are. But I’ve not had a chance to think about anything other than trying to recruit the right people who would fit in to the environment we’ve got at Yorkshire and the players would feel comfortable around.

“I spoke to a director of cricket at another club and he said I’ve done more in three months than he’s done in seven years. He’s probably right.”

‘I’m doing this for my son’: Woman carried off Waterloo Bridge during wave of protests over environment and cost of living crisis

"I’m doing this for my son," says a woman to the camera as she is carried off Waterloo Bridge by police officers during protests on Sunday staged by campaign groups Just Stop Oil, Extinction Rebellion and others.The major civil resistance march over the weekend closed four bridges in central London, bringing parts of the capital to a standstill, while simultaneous national rail strikes crippled transport services more widely.In the video, the woman provides a remarkably clear rationale for why she is protesting, despite being forcibly carried away by the police.Speaking to the camera following her as she is marched...
PROTESTS・1 DAY AGO
The Independent

A company which holds Worcester Warriors player contracts has been wound up, a development that is expected to initiate an exodus of players from Sixways.HM Revenue and Customs (HMRC) is pursuing the Warriors for unpaid tax in the region of £6million.While Worcester are in administration, the company that holds player and some staff contracts – WRFC Players Ltd, a subsidiary of WRFC Trading Ltd – had been operational and was the subject of HMRC’s action.Judge Nicholas Briggs made an order winding up WRFC Players Ltd at an Insolvency & Companies Court hearing on Wednesday.Ted Hill, Ollie Lawrence, Fergus Lee-Warner and...
RUGBY・35 MINUTES AGO
The Independent

Georgia Stanway: ‘I don’t think it will ever hit home what we actually achieved’

There are still times when Georgia Stanway walks into the Bayern Munich dressing room and some of her German teammates start to sing ‘Sweet Caroline’.There’s also a curiosity to that, beyond the idea that song accompanied what you might have presumed was a painful defeat for many of the Euro 2022 runners-up.It is actually one of the rare moments when Stanway really thinks about what happened in the summer at all. There just hasn’t been time to.The 23-year-old is in Bayern’s academy and - other than talking to The Independent - it’s a rare moment to just sit back amid...
SOCCER・2 HOURS AGO
The Independent

Darwin Nunez has insisted he has learnt his lesson from the “big mistake” of his red card against Crystal Palace and vowed not to lose his cool again.The summer signing became the first Liverpool player in Jurgen Klopp’s reign to be sent off for violent conduct when he headbutted Palace defender Joachim Andersen on his home debut.Nunez made just his third start for Liverpool in Tuesday’s 2-0 win over Rangers and said the three-match ban he had to serve has made it a difficult start to life at his new club.He told TNT Sports: “It was a very tough time....
PREMIER LEAGUE・1 HOUR AGO

Noah has ended Oliver’s eight-year reign as the most popular boy’s name in England and Wales, but Olivia continues to be the most common name for girls. Office for National Statistics (ONS) data shows Noah took the boys’ No 1 slot, while Olivia is top for girls for a sixth successive year.
U.K.・21 MINUTES AGO