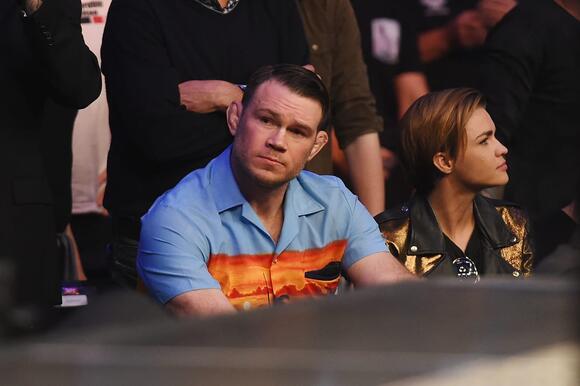 As the current UFC vice president of athlete development, not to mention a frequent public representative of the organization in the Las Vegas community, Forrest Griffin is a busy man. Still, the opportunity to help continue developing the sport of mixed martial arts in the U.S. at the grassroots level proved impossible for him to turn down.

The International Mixed Martial Arts Federation told MMA Underground that the UFC Hall of Famer has been appointed as the head of a selection committee that has been established "to recruit the best adult amateur fighters in the nation," as part of the United States Fight League, which was recently named as the official amateur MMA federation for the U.S.

"I definitely wasn't looking for another job, but if you think about, IMMAF's goals, they're aligned with my personal goals, and more importantly, they're in line with what the UFC and the UFC Performance Institute wants to do," Griffin told MMA Underground . "If you think about every sport, especially in the States, we have a collegiate pathway, a semi-pro pathway, a little more clear pathway to professionalization, right? That doesn't so much exist in the States (in MMA), you know, and it's funny, you see all these great amateur athletes – and not that a couple haven't come from the amateur leagues in the States – but you know, internationally they do a better job of organizing and basically creating a platform for their young and older amateur athletes and a pathway for them to either go pro or go to a world game or a championship, right? So that's what we're looking to do.

"We're looking to professionalize the amateurs to an extent – and that sounds awkward to say, but that I mean by that is just provide more uniform opportunities to U.S. amateur athletes."

The IMMAF was formed in 2012 as an international governing body for amateur MMA and has focused on the growth and development of the sport around the globe, including the organization of true international championships. The IMMAF envisions a day when MMA will be contested in the Olympic Games and continues to work with various sporting committees around the globe.

The U.S. has actually fallen behind in the development of amateur MMA on the international level, but Griffin is hoping the new federation can change that.

"[The IMMAF] has done a great job," Griffin said. "They've held events. They've held shows. They've come up with ways to accurately rank fighters to get these – there's not a ton of money, right? This amateur, that's the whole point, to get them to the competition so they can compete, and just as importantly, to enforce a very reasonable rule set that allows athletes to progress that skill pathway up to adulthood without sustaining traumatic injuries, et cetera, right?

"They've done a lot of great things. We've been a little behind in the States, one because the amateurs here have not been as organized. I mean, again, you think about we're 50 different states with multiple commissions – that presents a challenge in and of itself. A lot of countries don't have that working against them, but we feel in the States – and other people on this board with myself – that if we did a better job of capturing that U.S. talent, if we could get the states and the regions to work together better, we could really produce some great amateurs for the States to compete and do well in those championship tournaments."

Griffin will help to identify the athletes who will make up the national team that will represent the U.S. at the 2022 IMMAF World Championships later this year, but he's quick to note it's not something he'll be doing alone, with California Amateur MMA Organization official David Denkin and Fury Fighting Championship president Eric Garcia already appointed to the committee, and with more to come.

The United States Fight League is not wasting any time as a new IMMAF affiliate, with a national youth MMA championship tournament scheduled for May 14 at Dan Henderson’s Athletic Training Centre in Temecula, Calif. Open to athletes aged 8-17, the competition will identify the team that will represent the U.S. in the 2022 IMMAF Youth World Championships in Abu Dhabi.

While the organization is still very much in its infancy, past IMMAF standouts include current UFC athletes such as Brendan Allen, Muhammad Mokaev and Amanda Ribas. Griffin believes with the emergence of an organized U.S. amateur program, he'll be able to witness athletes who begin developing at the youth level but progress all the way to the rank of UFC champion.

"That's going to happen with or without me," Griffin said. "That's going to happen on a lot of levels. I guess our goal is to just to keep the States up with everyone else, you know? And yeah, that'll happen. There'll be a U.S. athlete that comes through the amateur ranks, does well and then goes on to win a belt in a major organization, like the UFC Championship belt, et cetera. That's only a matter of time."

• Vadim Nemkov on Representing Russia at Bellator 277: Keep Sports Out of Politics

• Khamzat Chimaev Pushed to Limit at UFC 273, But Result Only Stands to Show True Potential

15 Spanish players emailed the federation to claim the negative impact on their mental health and “emotional state” brought by their coach.
SOCCER・2 DAYS AGO
Sports Illustrated

The two supporters were ejected from the stadium after refusing to quash their demonstration during Friday’s international friendly.
PROTESTS・2 DAYS AGO
Sports Illustrated

The rising star had been scheduled to defend his WBC and WBO super featherweight belts against Robson Conceição on Friday night.
NEWARK, NJ・2 DAYS AGO