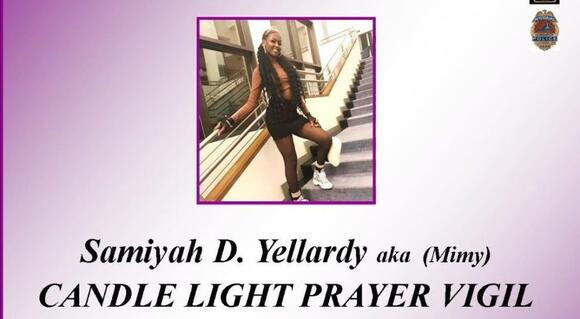 RICHMOND, Va. (WRIC) — Four teenagers were shot in the Richmond area last weekend –two of the victims died as a result of their injuries.

The 17-year-old victim of one of the tragedies has been identified by her family as George Wythe High School student Samiyah Yellardy.

On April 10, police were called to the 2200 block of Afton Avenue for the report of a shooting. Yellardy was found by officers , and pronounced dead at the scene.

There will be a candlelight prayer vigil at the student parking lot at George Wythe High School on Wednesday, April 13 at 5 p.m.

The announcement asks for individuals to bring their own candles, and to wear purple and white colors in honor of Yellardy.

RICHMOND, Va. (WRIC) — Police have identified the victim of a Richmond shooting that took place in September who spent weeks in the hospital before dying from his injuries last week. According to the Richmond Police Department, officers were called to the 2300 block of Afton Avenue for the report of a shooting on Sunday, […]
RICHMOND, VA・17 HOURS AGO
WRIC - ABC 8News

Richmond Police Department is investigating a shooting that resulted in a 14-year-old boy being hospitalized.
RICHMOND, VA・6 HOURS AGO
WRIC - ABC 8News

Henrico police are seeking a suspect in connection to a restaurant vandalism incident that occurred in the county's west end.
HENRICO COUNTY, VA・15 HOURS AGO
WRIC - ABC 8News

According to police, a driver saw a man lying in the road on the 5000 block of Vayo Avenue at around 5 a.m. on Sept. 30. Officers responded and found 36-year-old David Christopher Rosado dead from multiple gunshot wounds.
CHESTERFIELD COUNTY, VA・17 HOURS AGO

‘I was shocked and disturbed’: Henrico’s India K’Raja restaurant vandalized

CHESTERFIELD COUNTY, Va. (WRIC) — The Chesterfield County Police Department is searching for a man who robbed a 7-Eleven while using a flannel shirt wrapped around his head as a disguise. Police said the suspect walked into the 7-Eleven at 10031 Hull Street Road just before 5 a.m. on Sept. 16. Once inside, police said […]
CHESTERFIELD COUNTY, VA・21 HOURS AGO
WRIC - ABC 8News

The victim in an early morning shooting in Chesterfield on Friday has been identified, and an official cause of death has been determined.
CHESTERFIELD COUNTY, VA・2 DAYS AGO
WRIC - ABC 8News

Deadly Clarkson Road house fire in Richmond classified as accidental, no cause determined

Richmond Fire Department officials tweeted today that they still do not know the cause of the blaze of the house fire in the 1500 block of Clarkson Road, which took the life of Robert Mallory, but it was not set intentionally.
RICHMOND, VA・14 HOURS AGO

Police said the teen was shot along McDowell Road. Officers got the call for a shooting at around 8:19 a.m. Friday.
RICHMOND, VA・3 DAYS AGO
WRIC - ABC 8News

Richmond residents were left in shock this morning after flames shot through the roof of Ashton Square Apartments.
RICHMOND, VA・1 DAY AGO
WRIC - ABC 8News

Have you seen this man? Chesterfield Police searching for wanted fugitive

Crash shuts down all lanes on River Road in Chesterfield County

According to the Virginia Department of Transportation, the crash was located near the 8900 block of River Road, near Eanes Road. VDOT warned drivers to expect delays, as all east and west lanes were closed.
CHESTERFIELD COUNTY, VA・22 HOURS AGO

A man was killed in an accident at a Perdue Chicken facility in Prince George County, according to authorities.
3 DAYS AGO
WRIC - ABC 8News

The Henrico County Police Division is asking for the public's help in finding an elderly man with dementia who has been reported missing.
HENRICO COUNTY, VA・2 DAYS AGO
WRIC - ABC 8News

The Hopewell Police Department is seeking the public's help in its investigation into an armed robbery that took place on Friday at a Grab-N-Go store in the city.
HOPEWELL, VA・2 DAYS AGO
WRIC - ABC 8News

Lanes clear after crash on I-95 South in Richmond

According to 511Virginia, the crash took place at mile marker 75.9, between the Belvedere Street exit and I-95/I-64 interchange. The southbound left and center lanes are closed, as well as the left shoulder.
RICHMOND, VA・1 DAY AGO

According to the Richmond Department of Emergency Communications, the call for an apartment fire on the 600 block of Westover Hills Boulevard came in just after 3:30 a.m. on Sunday, Oct. 2.
RICHMOND, VA・1 DAY AGO
WRIC - ABC 8News

Richmond and Henrico both have medium COVID-19 community levels, and Chesterfield now has been deemed to have low COVID-19 levels according to a Center for Disease Control announcement.
RICHMOND, VA・1 DAY AGO
WRIC - ABC 8News

A Chase ATM building on West Broad Street in Richmond was destroyed after a pickup truck crashed into it on Saturday afternoon.
RICHMOND, VA・2 DAYS AGO