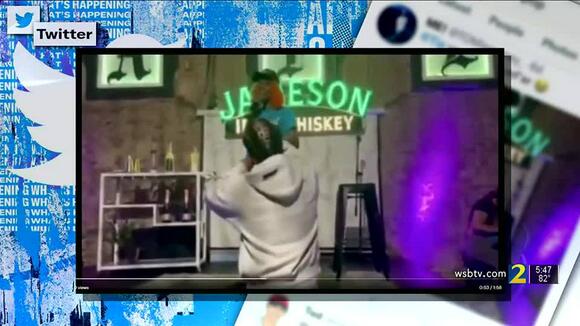 ATLANTA, Ga. — Atlanta rapper, T.I. is sparking conversation after a video surfaced on Twitter of him yelling at a comedian while she was on stage performing at an Atlanta bar.

The incident between the rapper and the comedian, Lauren Knight, only lasted a few minutes.

Channel 2′s Audrey Washington went to the Edgewood Avenue bar where it all happened.

Knight said the confrontation started when T.I. heckled her from the audience and told her to “take your wig off.”

That’s when she responded with the following: “I’ll take my wig off when you speak on your allegation situation.”

T.I. then shouted remarks back at her stating that he “ain’t never been in no case.”

Last year, the rapper and his wife faced sexual assault allegations; they both denied any wrongdoing.

At one point in the video it shows T.I. walk onto the stage, wrap his arms around the comedian and grab the mic. The two went back and forth for a few minutes and security began approaching the stage.

Knight said later on, she and T.I. talked and ended the feud.

T.I. then publicly admitted that he acted poorly.

“I don’t want to be beefing with Atlanta icons. I want to be able to walk the streets of Bankhead in peace,” Knight said.

Knight said she is moving forward with comedy and she will continue performing at the bar.

She also said T.I. is welcomed to attend.

Hey you can’t be a comedian telling jokes and can’t accept jokes being thrown at you. T.I. Your in the wrong business. Go back to the studio.

publicity stunt... riding the coat tails of the oscar stunt

WOW" NOT AGAIN ENOUGH IS ENOUGH.people should keep s*** out their mouth Comedians and all especially when they don't know what they're talking about. leave T.I. alone and Will Smith as well.

ATLANTA — She’s a notorious jewel thief who stole millions of dollars’ worth of bling around the world. Nicknamed “Diamond Doris” — Doris Payne, 91 — is the focus of documentaries and books detailing her life as a jewel thief spanning cities across the world, especially right here in Atlanta.
ATLANTA, GA・2 DAYS AGO
WSB Channel 2 Atlanta

ATLANTA — Atlanta police are investigating a shooting that occurred in Bankhead where a man and woman were shot, Capt. Christian Hunt said. According to Hunt, the woman told police two men were shooting at one another and she ran. [DOWNLOAD: Free WSB-TV News app for alerts as news...
ATLANTA, GA・1 DAY AGO
WSB Channel 2 Atlanta

HENRY COUNTY. Ga. — Erica Martin believes the show must go on, but there’s no harm in being cautious. “A lot of people are holding off setting up tents until tomorrow because of the wind,” Martin told Channel 2′s Berndt Petersen. Martin and her crew will...
HENRY COUNTY, GA・6 HOURS AGO

ATLANTA — Atlanta rapper Gunna’s lawyers have filed their third motion for a bond hearing, this time claiming the new indictment from prosecutors presented ‘no evidence to support its claims of dangerousness and has dismissed the only serious over act’ that was initially presented during his first bond hearing.
ATLANTA, GA・6 HOURS AGO
WSB Channel 2 Atlanta

Man left at Atlanta hospital shot, critically injured. Police searching for 2 who dropped him off

ATLANTA — Atlanta police said a man who was dropped off with a gunshot wound at Atlanta Medical Center Wednesday afternoon is in critical condition. Police are now searching for two men they say dropped the victim off and the car they were traveling in. [DOWNLOAD: Free WSB-TV News...
ATLANTA, GA・6 HOURS AGO
WSB Channel 2 Atlanta

Local charities are preparing to help those in need after Hurricane Ian. Channel 2′s Dave Huddleston reports how one group has already seen an increase in requests for help due to inflation over the summer. [DOWNLOAD: Free WSB-TV News app for alerts as news breaks]. Every Tuesday through Friday,...
ATLANTA, GA・7 HOURS AGO
WSB Channel 2 Atlanta

Police: 16-year-old dead after being shot at metro Atlanta apartment

ATLANTA — Atlanta police said a man who was dropped off with a gunshot wound at Atlanta Medical Center Wednesday afternoon is in critical condition. [DOWNLOAD: Free WSB-TV News app for alerts as news breaks]. Police said they are still not sure where the shooting happened. The victim was...
ATLANTA, GA・11 HOURS AGO
WSB Channel 2 Atlanta

Evacuating because of Hurricane Ian? Here’s a guide to places to stay in Georgia

ATLANTA — As Hurricane Ian gets closer to making landfall, many Floridians will be evacuating to Georgia to get away from the storm’s path. If you don’t have family or friends here in the metro area, here are some resources to find a safe place to stay until Ian passes:
GEORGIA STATE・14 HOURS AGO
WSB Channel 2 Atlanta

Georgia Power gears up in preparation for Hurricane Ian

‘Part of a Lifetime movie:’ Woman goes on the run in the middle of trial for abusing Cobb woman

COBB COUNTY, Ga. — A family says they were ready to see the woman they believe abused their elderly loved one taken away in handcuffs, but did not get that opportunity when she disappeared in the middle of her own trial. Channel 2′s Tom Jones spoke with the family...
COBB COUNTY, GA・5 HOURS AGO
WSB Channel 2 Atlanta

Little 5 Points businesses say they have become targets of crime

ATLANTA — Business owners say destructive smash and grab burglaries are costing them thousands of dollars. The manager of the Brewhouse café in Little 5 Points told Channel 2′s Justin Carter that someone stole 15 bottles of expensive tequila last week – and it was all caught on camera.
ATLANTA, GA・8 HOURS AGO
WSB Channel 2 Atlanta

ATLANTA — A man who police say assaulted a woman inside a bathroom at the Fulton County courthouse has been arrested. [DOWNLOAD: Free WSB-TV News app for alerts as news breaks]. Lester Walker was taken into custody Monday evening after a senior investigator with the Fulton County District Attorney’s...
FULTON COUNTY, GA・1 DAY AGO
WSB Channel 2 Atlanta

FULTON COUNTY, Ga. — A local police lieutenant is out of a job after several officers accused her of causing a hostile work environment. The officers said she was stealing money and drinking on the job, among other claims. Now, the city of South Fulton has asked an outside police agency to investigate the matter.
SMYRNA, GA・2 DAYS AGO
WSB Channel 2 Atlanta

BEREA, Ohio — (AP) — For the first time, the Cleveland Browns didn't mind that Myles Garrett wasn't with them on the field. The All-Pro defensive end stayed home to rest and recover Wednesday from injuries suffered in a single-car crash as his status for the Browns' game on Sunday at Atlanta remains in doubt.
CLEVELAND, OH・8 HOURS AGO
WSB Channel 2 Atlanta

PAULDING COUNTY, Ga. — The mother of two brothers killed in a Paulding County house fire called her sons her “pride and joy” and thanked the community for helping to raise the money to lay them to rest. [DOWNLOAD: Free WSB-TV News app for alerts as news...
PAULDING COUNTY, GA・2 DAYS AGO
WSB Channel 2 Atlanta

HALL COUNTY, Ga. — An Oakwood man is charged with abusing his infant after a medical exam revealed his daughter had broken bones, according to Hall County Sheriff’s Office. William Dorsey Raiford, 27, is facing charges of aggravated battery and cruelty to children in the first degree. [DOWNLOAD:...
OAKWOOD, GA・13 HOURS AGO