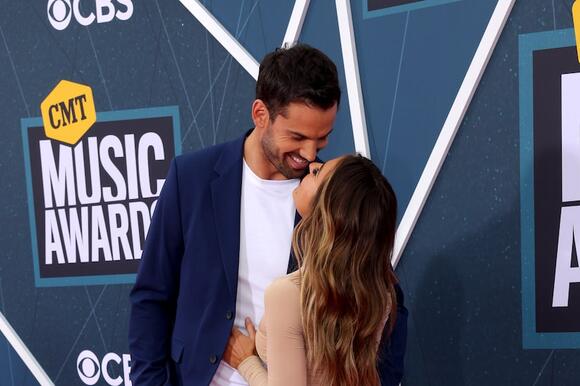 Jessie James Decker hit the red carpet with husband Eric Decker for a date night at the 2022 CMT Music Awards!

“Extra’s” Alecia Davis spoke with Jessie, who dished on her excitement for her first-ever award-show performance, as well how she and Eric improvised after he forgot his wedding ring at home.

After Eric flashed his hand, Jessie commented, “He forgot his wedding ring, so I drew him one.”

She pointed out, “I branded him with a Sharpie… Pete Davidson-style. He’s branded.”

Jessie said she was “so excited” to perform, saying, “My first time, I’ve never performed on an award show.”

Jessie also weighed in on Britney Spears’ pregnancy announcement, commenting, “I read the caption. I don’t know [if] that’s what she was saying, but if she is, then she fooled me. If she is, congratulations! How exciting — a baby’s always a blessing.”

Jessie and Eric’s three kids are doing “amazing” themselves.

Jessie admitted, “I like pinch myself every day that I get to wake up and be their mother. We’ve talked about this. We just wake up excited to be their parents. They’re the most amazing people in the whole world.”

Jessie also fangirled over the Judds, saying, “I fell in love with country music in the ‘90s and even Wynonna’s very first solo single ‘No One Else on Earth,’ that was one of the first songs I ever learned at the age of, like, 7. I’m just really excited to see them perform and make a little comeback.

The couple was also looking forward to seeing how Kelsea Ballerini was going to host the awards remotely. Eric described it as a “good twist” to the show, which was co-hosted by Kane Brown and Anthony Mackie.

“Bachelor in Paradise” alum Sarah Herron, 35, has a bun in the oven!. Sarah and fiancé Dylan Brown are expecting their first child, a baby boy who is due in May 2023. While she’s only seven weeks pregnant, Herron is sharing the news early. She told Us Weekly, “I know many families prefer to keep pregnancy private until after the first trimester, but I have shared entire fertility journey since day one. One of the blessings of IVF is the support I have gained by being transparent about this process.”
CELEBRITIES・14 HOURS AGO
extratv

Kaley Cuoco and Pete Davidson star together in the rom-com “Meet Cute,” but in real life Kaley is dating Tom Pelphrey. “Extra” chatted with Kaley at the “Meet Cute” premiere in NYC, where she gushed over Tom. Cuoco said, “Last year was the rough year....
CELEBRITIES・8 DAYS AGO
extratv

Teresa Giudice said goodbye to the ballroom on “Dancing with the Stars” on Monday night. “Extra’s” Jenn Lahmers was with her and her partner Pasha Pashkov after the elimination. Giudice shared, “It’s definitely not easy… I actually cried this week… I didn’t think I was...
TV SHOWS・1 DAY AGO
extratv

Sharon Osbourne Never Imagined She Would Be Branded a Racist (Exclusive)

Sharon Osbourne is speaking out after her controversial exit from “The Talk.”. She opened up to “Extra’s” Terri Seymour about the fallout from defending her friend Piers Morgan’s treatment of Meghan Markle and about her all-new FOX Nation documentary “To Hell and Back.”. Terri...
CELEBRITIES・2 DAYS AGO

Khloé Kardashian says she’s ready to talk about baby No. 2 with Tristan Thompson in a promo for “The Kardashians” Season 2. The exes were already the parents of 4-year-old daughter True when they welcomed a baby boy in August via surrogate. There was a lot...
CELEBRITIES・7 DAYS AGO
ABC7

Lauren Graham and Josh Duhamel hit the ice for season two of "The Mighty Ducks: Game Changers" on Disney+.
HOCKEY・7 MINUTES AGO
extratv

More than a month after her death, Olivia Newton-John’s family held a private memorial to say their goodbyes. Newton-John’s rep told Us Weekly, “There was a small and very private family gathering in California last week to celebrate Olivia. The family prefers to keep the details of the event private at this time.”
CELEBRITIES・2 DAYS AGO
extratv

Jennifer Hudson marked the launch of “The Jennifer Hudson Show,” turning 41, and a billboard in Times Square with a massive crowd and celebration this week. She told “Extra,” “It is the best way to kick off 41. I cannot believe… my show debuted on my 41st birthday and I get to be in the middle of Times Square to celebrate it, and always think when I am working on birthdays [that] if I wasn’t doing it, this is what I would be wishing over that candle… So to be able to do it, I do not take it lightly. I am so grateful to be here.”
CELEBRITIES・12 DAYS AGO

Mila Kunis is back with a new movie, both starring in and producing “Luckiest Girl Alive.”. “Extra’s” Rachel Lindsay spoke with Kunis about the film and her love of reality TV!. In “Luckiest Girl Alive,” Mila plays a high-powered magazine editor about to marry into a rich...
MUSIC・2 DAYS AGO
extratv

Olivia Wilde is taking on rumors her boyfriend Harry Styles spit on his “Don’t Worry Darling” co-star Chris Pine at the Venice International Film Festival. Wilde, who directed and stars in the film, stopped by “The Late Show with Stephen Colbert,” where she addressed the viral video.
CELEBRITIES・6 DAYS AGO
extratv

Last night, longtime friends of Bob Saget came together to celebrate the comedy legend at the Scleroderma Research Foundation’s Cool Comedy • Hot Cuisine benefit. “Extra’s” Jenn Lahmers was there to talk to his pals John Stamos, John Mayer, Jimmy Kimmel, and others. Speaking with Stamos,...
CELEBRITIES・6 DAYS AGO
extratv

Olivia Wilde celebrated the opening day of “Don’t Worry Darling” with a sweet throwback Instagram photo with boyfriend Harry Styles. The photo appears to have been taken during filming. Olivia, who directed the new movie, is all smiles as she sits across from Harry at a folding...
CELEBRITIES・5 DAYS AGO

Bachelor Peter Weber & Kelley Flanagan Are Reportedly Back Together!

Bachelor couple Peter Weber, 31, and Kelley Flanagan, 30, are giving their relationship another go, Us Weekly reports. A source says the exes are “full-on back together” after their split in December 2020. The insider reveals the pilot and attorney “rekindled their romance this summer,and have been spending...
CELEBRITIES・1 DAY AGO
extratv

Wynonna Judd is speaking out about her mom Naomi Judd’s suicide in her first interview since the country legend’s death. Naomi took her own life on April 30 at 76, the day before the Judds were inducted into the Country Music Hall of Fame. At the time, Wynonna and her sister Ashley Judd shared, “We lost our beautiful mother to the disease of mental illness."
CELEBRITIES・6 DAYS AGO
extratv

Class is back in session for “Abbott Elementary” after an A+ award season. The show took home three Emmys this month, and the show’s creator, writer, and star Quinta Brunson was just the second Black woman to win for Outstanding Writing in a Comedy Series. “Extra’s” Melvin...
TV SERIES・8 DAYS AGO
extratv

George Clooney and his wife Amal sat down for a rare interview on their eighth wedding anniversary. The couple opened up to “CBS Mornings” host Gayle King about their marriage, twins, and more. George recalled, “It was the minute she walked through the door, I was taken by...
RELATIONSHIPS・12 HOURS AGO
extratv

Gabby Windey and Erich Schwer got engaged on “The Bachelorette” finale, but it hasn’t been all roses for the couple! Erich was confronted about leaked text messages that showed him breaking up with another woman to go on the show. In a new interview with “Extra’s” Billy...
CELEBRITIES・7 DAYS AGO
extratv

Scooter Braun and Yael Cohen have finalized their divorce, reports Us Weekly. The news comes about one year after their split. Scooter and Yael, married since 2014, did have a prenuptial agreement. In court docs obtained by Us Weekly, Scooter will keep several properties and cars, more than 100 pieces...
TROUBLED RELATIONSHIP・6 DAYS AGO
extratv

“Twilight” star Ashley Greene is a mom! The actress and husband Paul Khoury just welcomed their first child together. Greene announced the arrival of Kingsley Rainn Khoury on Instagram, revealing she was born on Friday. Ashley wrote, “And just like that - everything changed. In a single moment, you...
CELEBRITIES・9 DAYS AGO
extratv

“Extra’s” Katie Krause was with coaches Camila Cabello, Blake Shelton, Gwen Stefani and John Legend to talk about Season 22 of “The Voice.”. Blake also revealed if he ever thinks about stepping down from the music competition show. Katie commented, “Twenty-two seasons in… I mean, are you...
TV & VIDEOS・12 DAYS AGO