After months of debate, school board agrees on George Wythe proposal 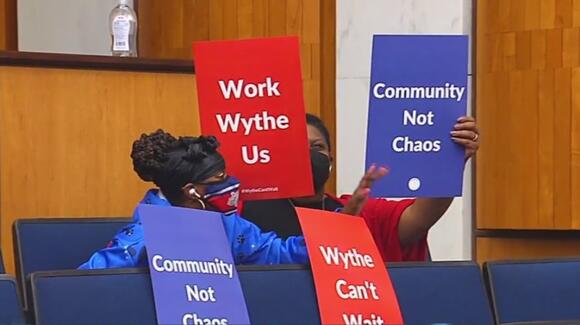 RICHMOND, Va. (WRIC) – After months of debate, the Richmond Public School board has finally come to an agreement with Mayor Levar Stoney over the construction of a new George Wythe High School.

The school board voted to agree with Stoney’s proposal for an 1,800-seat George Wythe High School last night.

Previous coverage: Richmond School Board agrees on George Wythe proposal amid community frustration: ‘This is not a game of deal or no deal’

Several parents spoke at the school board meeting last night, explaining to board members that the population growth is there and a new George Wythe High needs to be built to avoid overcrowding, similar to what is happening at River City Middle School.

School board member Kenya Gibson suggested going back with the design for a 1,600-seat school, but later retracted the amendment.

School board member Mariah White was fed up at the meeting last night. “This has been going on too long. This is starting to be a bunch of foolishness here. So don’t make a note on why we should be changing from 16 to 18-hundred,” she said.

Before taking a vote, board members discussed topics surrounding what building a new George Wythe High would look like and current issues the school and its students face.

School board member Stephanie Rizzi said transportation is definitely a concern she has.

“There are some students at Wythe currently who are waiting upwards of an hour for buses to take them home after school,” she explained at the board meeting. “Over the winter that meant that a lot of students were still sitting outside in the freezing cold or at nighttime.”

City council will vote on Stoney’s proposal on April 25. If approved, the city will transfer $7.3 million to begin the school’s construction.

Richmond and Henrico both have medium COVID-19 community levels, and Chesterfield now has been deemed to have low COVID-19 levels according to a Center for Disease Control announcement.
RICHMOND, VA・15 HOURS AGO
WRIC - ABC 8News

The results of a new housing study are clear, and they paint a grim picture not only for aspiring homeowners. Richmond, Henrico and Chesterfield are increasingly split between wealthy enclaves and private investors, with little room left for working-class homeowners.
RICHMOND, VA・1 DAY AGO
WRIC - ABC 8News

Virginia remains under a State of Emergency as the remnants of Ian bring rainfall, flooding and wind to parts of the state. For state agencies, storm preparation is shifting to response.
VIRGINIA STATE・2 DAYS AGO

LIST: Here are the Central Virginia schools that are closing or canceling activities for rain

As rain and wind from Hurricane Ian begins to hit Virginia, some Virginia School districts are beginning to adjust their schedules or cancel events.
VIRGINIA STATE・3 DAYS AGO
WRIC - ABC 8News

Petersburg City Public Schools recently held a new series of events that gives parents a chance to dine with their kids at school.
PETERSBURG, VA・1 DAY AGO

This week, the Centers for Disease Control and Prevention reported that Richmond City and Henrico County have low COVID-19 Community Levels for the first time in weeks.
HENRICO COUNTY, VA・2 DAYS AGO
WRIC - ABC 8News

As severe weather arrives in Richmond, the City is taking precautions to ensure the safety of all residents. A temporary inclement weather shelter will be opening in Church Hill.
RICHMOND, VA・2 DAYS AGO
WRIC - ABC 8News

With a suitcase in hand, Jerry Silva of the Virginia Red Cross is headed down to Florida to help with the aftermath of Hurricane Ian.
VIRGINIA STATE・1 DAY AGO
WRIC - ABC 8News

Around 60 members of the Virginia National Guard has been mobilized to prepare for the possible impacts of Hurricane Ian across the commonwealth.
VIRGINIA STATE・3 DAYS AGO

Richmond residents were left in shock this morning after flames shot through the roof of Ashton Square Apartments.
RICHMOND, VA・23 HOURS AGO
WRIC - ABC 8News

Guests will learn what makes the animals unique, discover their individual stories and learn ways to best help protect their wild habitats. The events are open to children ages five and up.
CHESTERFIELD, VA・3 HOURS AGO
WRIC - ABC 8News

PHOTOS: ‘Dachtoberfest’ comes to Richmond with dozens of dachshunds

Dozens of short-legged, long-backed hounds descended on downtown Richmond on Saturday for the City's first ever “Dachtoberfest” event.
RICHMOND, VA・1 DAY AGO

According to the NWS, major flooding is forecasted in the Hampton Roads and Eastern Shore areas, Richmond is expected to reach near-flooding levels in the next several days.
VIRGINIA STATE・1 DAY AGO
WRIC - ABC 8News

Winds are expected to increase in speed to 15-25 miles per hour this afternoon and evening, with stronger gusts possible. A total of one inch of rain is expected in the Richmond area today, and the temperature is expected to stay low with highs in the low-60s.
RICHMOND, VA・1 DAY AGO
WRIC - ABC 8News

Virginians prepare for change of plans, event cancelations due to severe weather from Ian