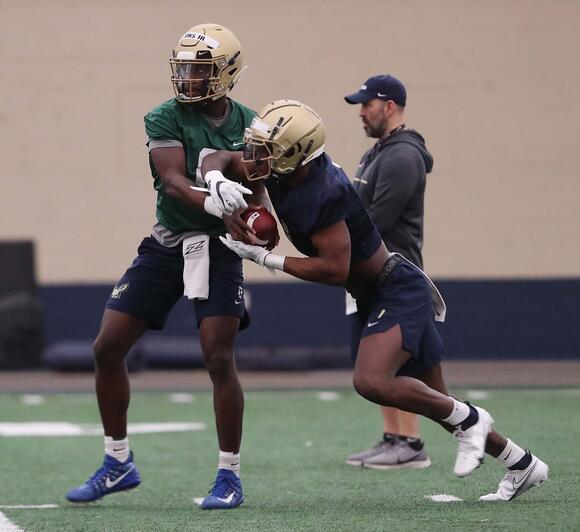 From what can be seen during the University of Akron’s spring football practices, the offense will be as advertised.

New coach Joe Moorhead made no promises but said the Zips would fit his style on offense – multiple, fast and with the potential for explosive plays.

And, oh, he’s calling the plays.

“A ton of responsibility is delegated to my assistants and outside of coach [Reno] Ferri all of these guys have been in the current iteration of the system we’re running … it’s not something I can ever see myself giving up and it also requires a significant amount of autonomy in the other two phases [defense and special teams].”

At this moment in time, it’s difficult to not focus on the offense in practice because the Zips lost several starters to the transfer portal.

Moorhead and staff are working on installation through the week and applying what they learn in team scrimmages. The emphasis has been on knowledge and scheme.

“It’s trending in a positive manner,” he said. “It’s improving but it’s nowhere near as close as it needs to be or did I expect it [to be]. The film is showing the kids care … The care level is off the charts right now.”

More importantly, Moorhead’s vision of offense is developing with an emphasis on playing an up-tempo style of play.” 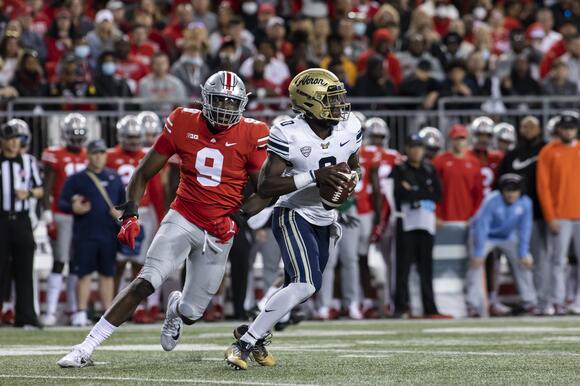 It’s easy to see who fits in that vision.

Given his size (6-foot-6, 215 pounds) and arm, DJ Irons is someone who could have very easily found a place at another school and competed for a starting position.

He stayed instead and is in a four-way battle to start at quarterback. He, like any of the three other quarterbacks, has had his ups and downs, but he continues to flash the dynamic play he showed on occasion last season, both passing and running the ball.

Fessler, who worked at Ohio State with North Canton native and receivers coach Brian Hartline, an experience he called invaluable in transitioning to coaching quarterbacks. Though he played under center himself at Penn State, Fessler appreciates being able to add that perspective to his coaching acumen.

He had some knowledge of Irons due to chatter the junior quarterback created prior to the teams meeting last year at Ohio Stadium.

Fessler was quick to emphasize there is no favorite for the job.

“There is not a clear, defined starter,” he said. “We’re continuing to work and develop a depth chart and work through that. What I love about them is they’re four good dudes …fun to work with, four guys who really care and are really competitive. Going to work with those guys every day is pretty special.”

Assistant head coach and running backs coach Terry Richardson, who held a similar position at Mississippi State when Moorhead was head coach, said the same about the running backs.

Not taking notice of Minnesota transfer Cam Wiley, who at 6-foot-2, 185 pounds looks more like a wide receiver than running back, is next to impossible.

He looks to have speed to spare whether breaking through the line of scrimmage on a run or on several occasions in practices he’s bested cornerbacks on pass routes.

“He is a guy that probably has a little more length than the traditional running back, but he’s a guy that’s packed in there," Richardon said. "He’s strong. He’s wiry, but he can run routes and catch the football. That has also been kind of a trademark of the usage of the running back in our system is the ability to get the guys the ball out of the backfield.”

Reach George M. Thomas at gthomas@thebeaconjournal.com or on Twitter @ByGeorgeThomas.