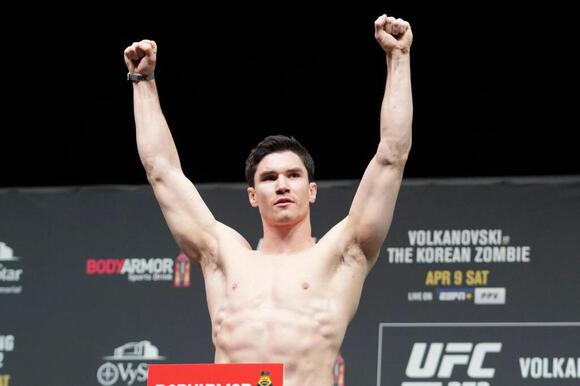 Mike Malott had a moment he will never forget in his promotional debut at UFC 273 on Saturday night.

Malott, 30, only has eight professional cage fights under his belt but he has been in the sport for over a decade. It wasn’t until he made it to his tenth year in the industry that he finally earned his opportunity in the Octagon by way of a first-round submission win on an October edition of Dana White’s Contender Series .

On April 9 in Jacksonville, Florida he finally made the walk for his UFC debut and he made the most of it. In his maiden voyage, he had very stiff competition in the form of 10-fight Octagon vet Mickey Gall. A fighter who has endured ups and downs in the organization and is one of the more experienced fighters in the welterweight division.

Over the opening round of Malott and Gall’s fight, each had moments, but Malott seemed to be getting the better of the exchanges as the bout progressed. He was also able to avoid the action from hitting the mat where the talented grappler he was facing would have some big advantages.

With less than two minutes left in the first round, the Canadian hit his opponent with a solid right hand that got his attention and immediately followed it with a vicious left hook that found the target and folded Gall up. Making him fall to the mat face first, and likely woke him back up.

Gall deserves credit for trying to gather himself and throw up a defense, but Malott was all over him and gave him no opportunity to recover. Forcing a stop to the action at 1:21 of the round.

The victory was a fourth straight for Malott — all finishes — and moved his record to 8-1. The setback is a second straight for Gall — the first losing streak of his career — as he has lost four of his last six.

Earlier this week, Victoria Azarenka fell in the semifinals of the Australian Open - but not before a bizarre incident happened. Azarenka fell to reigning Wimbledon champion Elena Rybakina by a final score of 7-6, 6-3. Before the match, though, she walked onto Rod Laver Arena wearing a Paris Saint ...
2 DAYS AGO
Athlon Sports

Patrick Mahomes' wife, Brittany, wants all the smoke.  Brittany, who's never been afraid to speak her mind on social media, just posted a message for the Bengals.  Hint: It's not very friendly.  "Cancun on 3," she said on Twitter.  "Cancun on 3" has become a trendy phrase in the ...
CINCINNATI, OH・11 HOURS AGO
Sportsnaut