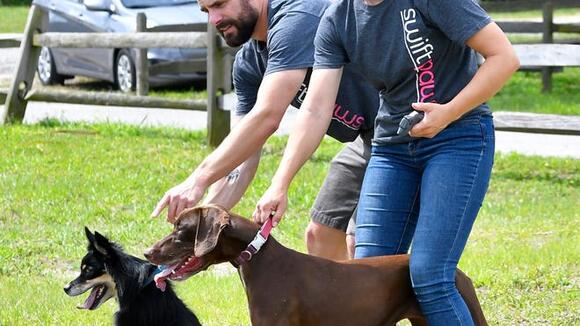 Did the SwiftPaws founder and CEO secure a "Shark Tank" deal? Wolgram didn't reveal the secret.

But it turns out the Malabar resident was wearing the obvious clue on her necklace: one of Lori Greiner's rare-and-coveted 24-karat "Golden Ticket" medallions.

Greiner — who is known as "the queen of QVC" — agreed to invest $240,000 for a 6% equity stake in SwiftPaws, a small Melbourne company that says it has developed the world’s first backyard dog lure coursing machine.

"Meghan, everything that you have done, you made it yourself. You did everything you could to make this work. And you understand business," Greiner told Wolfgram on "Shark Tank."

"Really, you're so impressive. And then the product, I think, is really phenomenal," Greiner said.

"And I think you can sell millions and millions of these," she said.

Based at Groundswell, SwiftPaws employs four full-time workers and operates a small warehouse just north of downtown Melbourne for assembly and packing.

"I've been up so many nights. There's going to be so many happy dogs," an emotional Wolfgram told Greiner after they embraced on the "Shark Tank" stage.

Wolfgram built her first prototype lure-course contraptions more than a decade ago on her parents' dining-room table in Palm Bay. She founded the monthly Lure Course Brevard dog-exercise gatherings at Wickham Park in Melbourne and a field in Cocoa.

A "Shark Tank" producer contacted Wolfgram in August, and she flew to Los Angeles and taped her segment in September. The results were revealed during Friday's live ABC broadcast and the Groundswell party — which was punctuated by dog barks.

On "Shark Tank," Wolfgram demonstrated the dog-exercise device with Piper, her German shorthaired pointer — who drew laughter from the "sharks" by excitedly spinning and darting across the stage chasing a white flag.

"Meghan — day in, day out — she lives and breathes SwiftPaws. She knows this business inside and out," Jarin Eisenberg, Groundswell chief operating officer, told the crowd.

The founder and CEO of Skinnygirl warned, "Girl, don't do it. It's not worth it," in reference to Kylie Jenner's trendy but overpriced birthday makeup kit.
BEAUTY & FASHION・1 MINUTE AGO
Parade

A good night’s sleep seems to be a precious gift that can often be all too elusive, so it’s no surprise that many of us are eager to try anything that can help us sleep better. One option that has become trendy right now is weighted eye masks.
SCIENCE・13 MINUTES AGO
Florida Today

Space is important to us and that's why we're working to bring you top coverage of the industry and Florida launches. Journalism like this takes time and resources. Please support it with a subscription here. --- Update: SpaceX called an abort of its Falcon 9 launch attempt on Thursday, Oct. 6, at 7:20 p.m. EDT just 30 seconds before the scheduled liftoff. Another attempt is set for 7:06 p.m. EDT on Friday, Oct.7. ...
FLORIDA STATE・1 DAY AGO