Troy Williams: Fayetteville has a ‘strong mayor’ model of governance but it is not supposed to 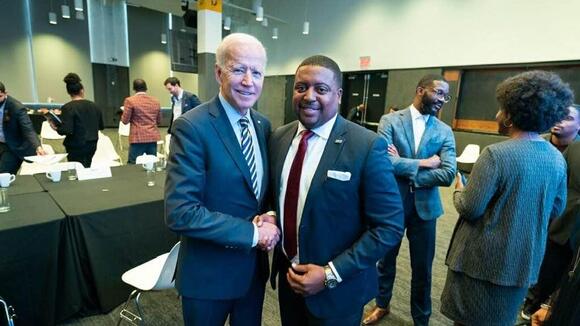 Early voting will begin in just over two weeks, on April 28. There is a lot at stake in this election cycle at all levels.

Moreover, Gov. Roy Cooper’s endorsement of an opponent of incumbent N.C. Sen. Kirk deViere in the District 19 state senate race has overshadowed what might be considered the most critical Fayetteville municipal election in recent history.

Former District 3 Council Member Tisha Waddell resigned from the Fayetteville City Council last fall, and Antonio Jones was appointed to complete her term. Waddell’s resignation included a list of alleged improprieties by the mayor and some other council members. Thus far, some independent investigative reporting has uncovered an apparent lack of transparency concerning some matters but has yet to identify any violations of the law.

This council has been historic in that the mayor and seven members are African American, comprising 80% of the Council. African Americans gaining political control of City Hall ought not to be surprising since many parts of the city have become overwhelmingly Black in the last decade.

Whether African Americans can continue to sustain a majority on the council remains unclear. The presence of a plurality of African Americans on the council has not paid substantial political dividends for the Black community. Furthermore, both whites and Blacks have witnessed a sharply divided council that has spent excessive time fighting internally.

What’s the problem? As a rule, the Fayetteville City Council is supposed to be a nonpartisan governing body. Individual council members are entitled to their respective political ideologies, but engaging in divisive politics like what goes on in Washington and Raleigh undermines the ability of our city leaders to govern with a broader appeal.

The following is a glaring example: In July 2020, Mayor Mitch Colvin wrote a partisan column in this newspaper attacking one of our U.S. Senators. He said: “U.S. Sen. Thom Tillis is leading an effort that puts lives in jeopardy.” In another part of the column, he says: “This paves the way for President Trump and his “Dirty Deputies” to eliminate safeguards that keep our water, air and public land clean.”

I get what’s going on. The thought was that Tillis would lose his seat to a Democrat, so why not assist by taking a shot at the Republican, but that’s not what happened; Tillis won. Mayor Colvin is entitled to his opinions but does this kind of partisan rancor advance Fayetteville’s agenda in Raleigh and Washington, or does it hurt our cause? The answer ought to be obvious.

Since 1949, Fayetteville has operated under a council/manager form of government, the predominant form in North Carolina. Under this form of government, the Fayetteville City Council performs the legislative functions of the city, establishing laws and policies, setting strategic priorities and adopting the annual budget. The mayor, the only voting member elected at-large, acts as the official head of the city government and presides at City Council meetings.

Frayda S. Bluestein, Professor of Public Law and Government at the UNC School of Government, wrote in a 2009 blog: “Compared to other states, North Carolina has created a very limited role for mayors. Our state laws leave many decisions about the management and operation of municipalities to the governing board, or, in jurisdictions operating in a council-manager form of government, to managers.” North Carolina’s two main statutes that describe the role of North Carolina mayors, G.S. 160 A-67 and G.S. 160A-69 describe them as, in part, ceremonial.

So, what’s the remedy for what ails City Hall? Former City Council member Tisha Waddell appears to be right about at least one thing. The collective council is not running Fayetteville as initially designed. They are operating with a counterfeit version of a strong mayor.

What’s the answer? Voters will have to hold elected officials accountable at the ballot box. If council members don’t do their jobs, elect someone who will. Insanity is repeating the same mistakes and expecting different results.

It doesn’t matter what color a mayor is r the council, it’s can the mayor and council represent the people in Fayetteville and not benefit himself or 1 group of people. My opinion the mayor did not represent all the people of the community, during his 1st term of office, he’s not a strong leader. Our crime rate is high, lot of police opening positions, rumor morale is low. Only time the police chief is visible is when it benefits her. I recall in the past the city has fired police chiefs with her current records. Market house is a disgrace to Fayetteville. Interesting the fence is going to be removed. Wonder if up coming election has something to do with it. Fayetteville community please go out and vote for candidates that represent all the people of Fayetteville.

I am voting for Franco Webb he represents the people of Fayetteville and a real politician. A person of the community and a solid family man!

I will never vote for mitch Colvin again. & when I pass away his services will not b NEEDED