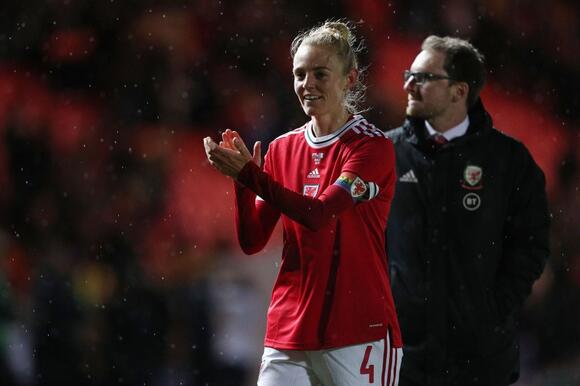 Wales suffered a 2-1 defeat in Women’s World Cup qualifying as France maintained their 100 per cent record at Llanelli.

Wendie Renard and Marie-Antoinette Katoto scored as France, who are ranked third in the world – 28 places above Wales – made it seven wins from as many games.

Sophie Ingle halved the deficit with a deflected strike 19 minutes from time, and Wales were denied an equaliser when Gemma Evans’ header was ruled out for offside.

Helen Ward was sent on in stoppage time to win her 100th cap and become the fourth Welsh woman to reach the milestone after Ingle, Jess Fishlock and Loren Dykes.

Slovenia’s 2-0 win in Kazakhstan moved them one point above Wales in the race for second place and a play-off spot.

But Slovenia have played one game more than Gemma Grainger’s side and visit France on Tuesday.

Wales play away to Kazakhstan, who are yet to collect a point from six games, on the same night.

France had won 2-0 when the sides met in Brittany in November and dominated the early stages at Parc y Scarlets with Paris St Germain winger Kadidiatou Diani a constant danger.

Diani had two chances to open the scoring in a matter of seconds after 16 minutes.

Laura O’Sullivan denied her first effort at the near post before France recycled possession and she slotted wide.

Wales had some bright moments in a competitive first half despite often being penned back by France’s elegant one-touch football.

Ingle saw an effort blocked following a penalty-box scramble and Fishlock failed to capitalise on Pauline Peyraud-Magnin’s poor punch in the France goal.

France broke the deadlock after 31 minutes just seconds after O’Sullivan had superbly pushed away Renard’s effort.

Sandie Toletti swung over another corner and Renard rose highest again to score with a carbon-copy header.

France doubled their lead after 57 minutes when O’Sullivan’s attempted clearance was blocked by Katoto, who was left with the simple task of rolling the ball into an empty net.

Ingle set up a grandstand finish with her fifth Wales goal as she fired through a crowd of France defenders.

Diani had a late effort scrambled off the line and France now need one more win to secure qualification for next year’s finals in Australia and New Zealand.

Jonny Evans insists Ian Baraclough still has the backing of the Northern Ireland dressing room as attention turns to next year’s Euro 2024 qualifying campaign after a dismal Nations League run.Tuesday’s 3-1 defeat to Greece will have implications next year; although Northern Ireland avoided the threat of relegation, with only one win in six they will still drop down the rankings and face the prospect of a more daunting qualifying draw.After the match in Athens, Baraclough heard boos when he went to applaud the travelling fans, with isolated chants of ‘We want Bara out’, but although the match was far...
UEFA・30 MINUTES AGO
The Independent

Hampshire pushed champions Warwickshire to the brink of relegation on the third day of their LV= Insurance County Championship clash at Edgbaston.Replying to the home side’s 272 for four declared, Hampshire made 311 thanks to James Vince (98) and former Edgbaston favourite Keith Barker (76).Warwickshire closed on 62 for two second time around – 23 ahead – but, after rain took out much of the first two days, a draw is overwhelmingly likely.That would secure a runners up spot for Vince’s side and send the Bears down.Yorkshire’s defeat to Gloucestershire at Headingley has given them a glimmer of hope but...
SPORTS・3 HOURS AGO
The Independent

Moeen Ali branded England’s Twenty20 batting a disappointment after they saw a second chase against Pakistan go off the rails in the space of four days.Having failed to make 167 in Karachi on Sunday, the tourists lost track of an even slimmer target as they were unable to make 146 at Lahore’s Gaddafi Stadium.Moeen did his best to drag the result back with a captain’s innings of 51 not in 37 balls but he lost a last-over battle of wills with debutant seamer Aamer Jamal, who secured a five-run win for his side.Phil Salt, Alex Hales, Ben Duckett and Harry...
SPORTS・1 HOUR AGO
The Independent

Rugby league’s major shake-up – What are the new proposals from IMG?

Rugby league is set for a major shake-up under new proposals by global sports media giants IMG, with automatic promotion and relegation axed and clubs subjected to a grading system which will determine their status within the game.Here, the PA news agency answers some of the key questions emerging from Wednesday’s presentation to clubs and the media in Manchester.What exactly is IMG proposing?IMG has today presented the recommendations arising from the Reimagining Rugby League Consultation Project – a key part of the first phase of the agency’s 12-year strategic partnership with the sport agreed in the spring.— Rugby Football League...
RUGBY・3 HOURS AGO

Stand-in skipper Moeen Ali came close to hitting England out of trouble at the death only to be bested by a debutant as Pakistan took control of the Twenty20 series for the first time.The hosts were bowled out for just 145 in Lahore, Mark Wood excelling again as he took three for 20 and hit 95mph, but an England batting line-up missing the likes of Jos Buttler, Jonny Bairstow, Ben Stokes and Liam Livingstone misfired for the second game in a row.Moeen took them within one blow of victory, hitting 51 not out in 37 balls, but newcomer Aamer Jamal...
WORLD・2 HOURS AGO