Judge Ketanji Brown Jackson quotes Maya Angelou: 'I am the dream and the hope of a slave' 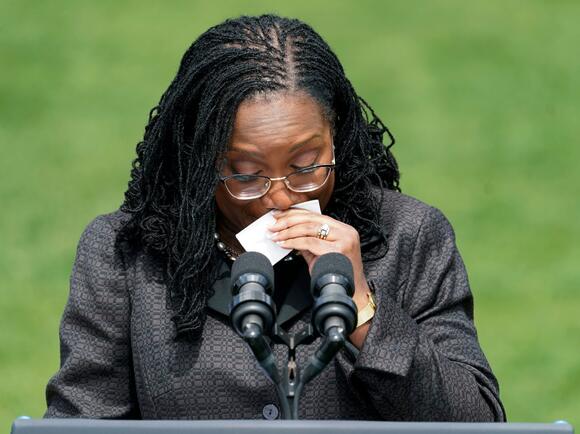 Judge Ketanji Brown Jackson gave a soaring speech on Friday to mark her Supreme Court confirmation, quoting Maya Angelou's famous words in saying that she too was "the dream and the hope of the slave."

"We have come a long way toward perfecting our union," Jackson said, echoing President Lincoln's famous words. "In my family, it took just one generation to go from segregation to the Supreme Court of the United States."

Angelou's words come from "Still I Rise," a poem from one of her most famous works.

Jackson called it an "honor of a lifetime" to become the first Black woman to serve on the Supreme Court. She will replace Justice Stephen Breyer, whom she once clerked for, after he retires later this summer.

"It has taken 232 years and 115 prior appointments for a Black woman to be selected to serve on the Supreme Court of the United States," Jackson said. "But we've made it!"

The historic nature of the moment was impossible to miss. Jackson delivered her remarks on the South Lawn of the White House, a building that was partially constructed by enslaved people, as First Lady Michelle Obama famously reminded Americans . Jackson was flanked by Vice President Kamala Harris, the first Black woman to hold the office, and President Joe Biden.

Jackson thanked her parents, "who attended racially segregated schools growing up," as she put into perspective her confirmation and what it means for the nation. She also credited Dr. Martin Luther King Jr., Supreme Court Justice Thurgood Marshall, Judge Constance Baker Motley, and many others "who did the heavy lifting that made this day possible."

"And for all of the talk about this historic nomination and now confirmation, I think of them as the true path-breakers," Jackson said. "I am the just the very lucky first inheritor of the dream of liberty and justice for all."

How can she feel proud knowing that she was only picked because of her gender and race. It’s like getting a participation trophy. She never would have even been considered based on her accomplishments.

Very sad day for America . She is a racist and on top of that not qualified for the job . Noticed she said she is African American instead of American . The woman doesn’t even know what she is .

"They stare at me as if to say, 'Look at what we've done ... this is what we can accomplish if we put our minds to it,'" Jackson said on Friday.
CONGRESS & COURTS・2 DAYS AGO
Business Insider

Justice Elena Kagan called the Voting Rights Act an "important statute" and "one of the great achievements of American democracy."
ALABAMA STATE・7 HOURS AGO
Business Insider

Jackson's addition to the bench did not change the court's 6-3 conservative majority, but maintained it.
CONGRESS & COURTS・1 DAY AGO
Business Insider

Biden apologizes to the family of dead congresswoman for his 'Where's Jackie?' gaffe

Walorski's mother responded "in Heaven with Jesus" when Biden brought up the gaffe, the New York Post reported.
INDIANA STATE・11 HOURS AGO

Trump denied allegations that he showed ex-employees salacious photos of women he'd been involved with, telling Maggie Haberman it's 'not my style'

Former employees of Donald Trump told NYT reporter Maggie Haberman that Trump showed them inappropriate photos of women he said he was involved with.
POTUS・8 HOURS AGO
Business Insider

AOC says her office struggles to keep up with the 'astronomical' level of daily threats that she receives: NYT

Since last year, Congresswoman Ocasio-Cortez has spent over $120,000 on security protection, according to data examined by The New York Times.
CONGRESS & COURTS・2 DAYS AGO
Business Insider

'The View' co-host Alyssa Farah Griffin, a former White House aide, calls Trump's remarks against Elaine Chao 'despicable': 'He's not even trying to hide the racism at this point'

Alyssa Farah Griffin called out Trump's comments against Mitch McConnell and Elaine Chao. "He's not even trying to hide the racism at this point," Farah Griffin said in a tweet on Saturday. Trump publicly attacked the Senate Minority leader and insulted his former cabinet official in a post on Truth...
POTUS・2 DAYS AGO

"Confidence Man" by NYT reporter Maggie Haberman, a new book on Donald Trump, was released Tuesday. Trump told his long-time friend Tom Barrack to "get out" after advising him to concede the 2020 election. Jared Kushner said he didn't press Trump to concede because he was the grandfather to his...
PRESIDENTIAL ELECTION・10 HOURS AGO
Business Insider

George Conway weighed in on Trump's brimming docket of legal issues. He predicted that Trump would eventually be convicted, but would also cause "real pain" to the US. "The party is finally going to realize that Trump will take them down with him," Conway said. George Conway, a prominent lawyer...
POTUS・21 HOURS AGO
Business Insider

Trump himself has also been guilty of this apparent hypocrisy amid his push to ban almost all early voting.
PRESIDENTIAL ELECTION・1 DAY AGO
Business Insider

Trump called a secret Oval Office bathroom the 'Monica Room' and claimed he had to have it remodeled because Obama used it: book

Trump dubbed his "secret bathroom" just off the Oval Office the "Monica Room," according to a new book. The book by NYT reporter Maggie Haberman said that Trump told guests he fully renovated his bathroom after Obama left. Officials later confirmed that the claim wasn't true, and only the toilets...
POTUS・2 DAYS AGO

Trump often speculated about others' sexualities, according to NYT reporter Maggie Haberman's book. Trump mocked gay men and called them "queer" or "faggot," his employees reportedly said. The revelations are made in te new book "Confidence Man: The Making of Donald Trump and the Breaking of America," seen by The...
POTUS・2 DAYS AGO
Business Insider

Trump will likely run for president again in 2024 in a bid to evade legal woes but might not see out the campaign, NYT's Maggie Haberman says

Oath Keepers founder Elmer Stewart Rhodes' lawyers plan to argue that he shouldn't be convicted over charges relating to the Capitol riot as he was waiting for orders from then-President Donald Trump, which never came, the Associated Press reports. Rhodes, who has been charged with seditious conspiracy, plans to take...
POTUS・2 DAYS AGO
Business Insider

Ex-GOP strategist slams Trump for 'assassination instructions' against McConnell: 'It's beyond the pale. Every Republican ought to be able to say so.'

The trial of Oath Keepers founder Stewart Rhodes and four members of the group is "one of the most important" in history, a defense lawyer said.
LAW・1 DAY AGO
Business Insider

Donald Trump says a simple disclaimer gives him immunity from fraud. Could he have a point?

Donald Trump thinks a two-page disclaimer he staples to his financial documents makes him immune from fraud. Not everyone thinks that's crazy.
PUBLIC SAFETY・2 DAYS AGO