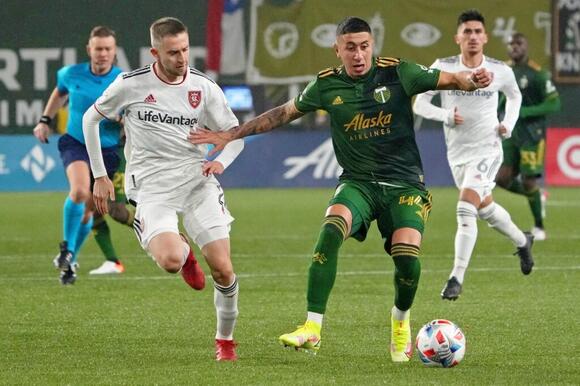 The Portland Timbers signed midfielder Marvin Loria to a contract extension through 2024 on Wednesday.

The deal includes a club option year for 2025.

Loria, 24, is in his fourth season with Portland. He has started 31 of 66 contests with the Timbers and has registered four goals and nine assists. Last season, he had a career-high six assists.

Portland is 1-2-3 (6 points) to start the season and will play Saturday at Vancouver. The Timbers lost the 2021 MLS Cup championship game to New York City FC.

The Seattle Mariners needed to try something different after suffering eight losses in 11 games as they sought their first
SEATTLE, WA・3 HOURS AGO
Sportsnaut

The Oklahoma City Thunder acquired forward Maurice Harkless and a 2029 second-round pick from the Atlanta Hawks on Tuesday in
OKLAHOMA CITY, OK・1 DAY AGO
Sportsnaut

The Minnesota Twins finish up their 2022 home schedule on Thursday afternoon as they try and complete a three-game sweep
CHICAGO, IL・7 HOURS AGO
Sportsnaut

Choctaw Stadium: What you need to know to make it a great day

Once the home of the Texas Rangers, Choctaw Stadium will now be a hosting site for the upcoming 2023 XFL
ARLINGTON, TX・1 DAY AGO

Three things are constant in life. Those are death, taxes and the Sacramento Kings missing the playoffs. After more than
SACRAMENTO, CA・1 DAY AGO
Sportsnaut

The Los Angeles Angels will get another look at their potential future shortstop when they host the Oakland A’s on
ANAHEIM, CA・1 DAY AGO