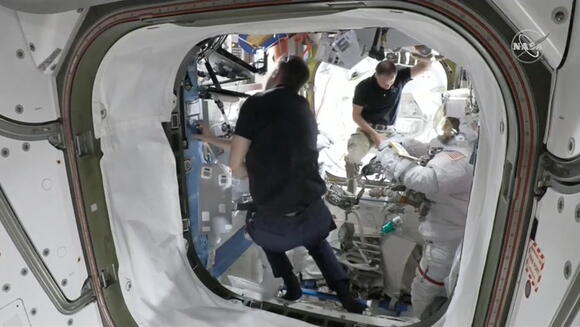 Astronaut Chris Hadfield has said that he has seen “countless things in the sky” that he does not understand.

The former astronaut, who served as the commander of the International Space Station and was a fighter pilot in the Canadian air force, made the comment ahead of a United States government report about unidentified aerial phenomena (UAPs) that will be released next month.

However Mr Hadfield said that despite such mysteries, “to see something in the sky that you don’t understand and then to immediately conclude that it’s intelligent life from another solar system is the height of foolishness and lack of logic."

While it is likely that extraterrestrial life exists somewhere in the universe, Mr Hadfield told Cross Country Checkup that “definitively up to this point, we have found no evidence of life anywhere except Earth, and we’re looking."

Mars has been a popular target for potential extraterrestrial life, due to its similarity with the early stages of our own planet.

"Why are we trying to land on Mars? Well, I think the fundamental question is that Mars was a lot like Earth four billion years ago when life first formed on Earth," Mr Hadfield said. "So if it happened here, did it happen there? And it will be evident somewhere in the geologic record.”

He added that if the Mars rover finds just one fossil “we will know we’re not alone in the universe."

As well as Mars there is also potentially alien life in the clouds of Venus or on the distant moons of one of our gas giants.

Researchers have suggested that there could be microbial life in the clouds of Venus because of the presence of ammonia , which on Earth is a key indicator of life from aquatic organisms.

“It has hydrogen attached to it, and there’s very little hydrogen around. Any gas that doesn’t belong in the context of its environment is automatically suspicious for being made by life.”

Another potential home for aliens could be Jupiter’s smallest moon Europa, with salt water in the shell of the celestial body transporting oxygen to an ocean of liquid water that could sustain living organisms.

“Our research puts this process into the realm of the possible,” said UT Jackson School of Geosciences Department of Geological Sciences professor Marc Hesse, “It provides a solution to what is considered one of the outstanding problems of the habitability of the Europa subsurface ocean.”

somebody on another planet is looking at earth and figuring if there is any intelligent life , only to find out there isn't any , life but not intelligent

I do not doubt it. I had a friend that was retired Delta pilot and he explained to me that when you saw “UFOs“ you didn’t report it because of all of the red tape and hassle that you would have to go through. The universe has been around for 13.8 billion years and contains billions of other galaxies besides our own. The odds that were the only ones here are very slim

Does it really matter? No. We can’t even take care of business on earth much less interfere with anybody else who might be out there. If they are out there, they stay away from us for a reason. The first thing earthlings would do is tell them they’re not what they think they are.

Nasa has released images taken by the Webb and Hubble space telescopes that worked together simultaneously for the first time, capturing the space agency’s Dart spacecraft slamming into the asteroid Dimorphos on Monday.Working in sync, the Webb telescope and its older counterpart, have shed more light on the cosmic event and battered asteroid, suggesting the collision was “bigger than expected”, said Ian Carnelli of the European Space Agency (ESA), according to AFP.“For the first time, Webb and Hubble have simultaneously captured imagery from the same target in the cosmos: an asteroid that was impacted by a spacecraft after a...
ASTRONOMY・1 HOUR AGO