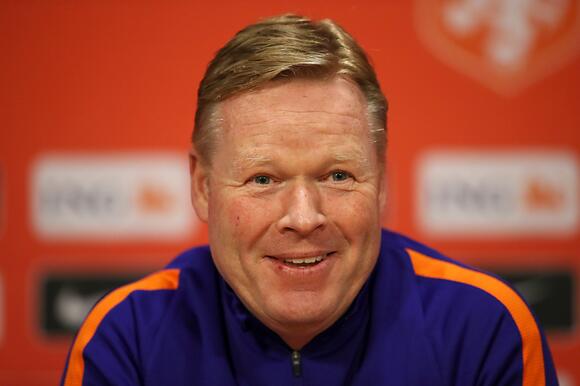 Ronald Koeman will succeed Louis van Gaal as Holland manager after the end of this year’s World Cup.

Van Gaal recently disclosed he was receiving treatment for prostate cancer but the 70-year-old former Manchester United boss intends to oversee the Dutch team’s fortunes in Qatar in November and December.

Koeman will then take the reins for a second spell after signing a contract until the 2026 World Cup.

He posted on Twitter: “Proud to share I will be the manager of Netherlands’ national team again after the WC. I am very much looking forward, let’s reach new successes together!”

Koeman was in charge as Holland finished runners-up in the inaugural Nations League in 2018-19 and helped his native country qualify for Euro 2020 before leaving for an ill-fated 14 months at Barcelona.

The 59-year-old former Southampton and Everton boss represented Holland 78 times as a player, scoring 14 goals, with the ex-centre-back a key part of the side in their 1988 European Championship triumph.

He added in a statement on the Royal Dutch Football Association (KNVB) website: “I am looking forward to the new collaboration.

“About a year and a half ago I certainly did not leave the Dutch national team out of dissatisfaction.

“My stay felt good, the results were good and the click with the internationals was good. We will continue on that path in the future.”

Holland finished top of their qualifying group for the 2022 World Cup, where they have been drawn alongside hosts Qatar, Senegal and Ecuador for a tournament that runs from November 21 to December 18.

Marianne van Leeuwen, director of professional football at the KNVB, said: “I did not want to wait to fill in the succession of Louis van Gaal.

“The changing of the guard will soon fall at an atypical moment; the end of the calendar year, a period in which top trainers have been under contract for a long time.

“Already in mid-January we decided to contact Ronald, who was available. We are very happy that Ronald will return next year.

“During his previous term as national coach, there was great satisfaction with his work and the results.”

Liverpool boss Jurgen Klopp joked that his team were confused by a tactical switch in their victorious 2-0 match against Rangers FC on Tuesday, 4 October.“I think our set-up was the biggest surprise tonight, I’m going to say it like this. I think we surprised ourselves,” the German football manager said in a post-match press conference.Mr Klopp said they wanted to go about their defence differently in the Champions League match, to “close different gaps” in their strategy.Click here to sign up for our newsletters.
PREMIER LEAGUE・1 HOUR AGO
The Independent

Graham Potter secured his first win as Chelsea manager against Crystal Palace and will be keen to build on the result as his side resume Champions League action.AC Milan, beaten only once so far this season, are the visitors to Stamford Bridge.Milan sit top of Group E after a win and a draw from their opening two fixtures, but Stefano Pioli is facing significant fitness issues within his squad and may be forced to reconfigure his side.Pioli conceded ahead of travelling to London that his side might be up against it given their injury woes, but the reigning Italian champions...
PREMIER LEAGUE・37 MINUTES AGO
The Independent

FC Copenhagen coach Jacob Neestrup admits trying to stop Erling Haaland is just the start of his worries as his side prepare to take on Manchester City.The Danish champions face a daunting task as they travel to the Etihad Stadium to tackle the Premier League winners in the Champions League on Wednesday.City are strongly fancied to win the European title this season after a number of near misses in recent years, having bolstered their side with the prolific Haaland.The Norwegian has scored 17 goals in just 11 appearances for the English side since his summer move from Borussia Dortmund.Neestrup said:...
PREMIER LEAGUE・2 HOURS AGO
The Independent

Darwin Nunez has insisted he has learnt his lesson from the “big mistake” of his red card against Crystal Palace and vowed not to lose his cool again.The summer signing became the first Liverpool player in Jurgen Klopp’s reign to be sent off for violent conduct when he headbutted Palace defender Joachim Andersen on his home debut.Nunez made just his third start for Liverpool in Tuesday’s 2-0 win over Rangers and said the three-match ban he had to serve has made it a difficult start to life at his new club.He told TNT Sports: “It was a very tough time....
PREMIER LEAGUE・1 HOUR AGO

Rangers boss Giovanni van Bronckhorst says his team made “too many mistakes” after their 2-0 loss to Liverpool on Tuesday, 4 October.“Especially in the first half, we made too many mistakes in our passing and also in our technical first touches. I think we knew the pressure was there, we did much better in the second half,” he said.Speaking in the post-match press conference, the Dutch football manager also said it was wrong to underestimate Liverpool, adding one should “not forget” the level they can perform.Sign up for our newsletters.
SOCCER・2 HOURS AGO
The Independent

Georgia Stanway: ‘I don’t think it will ever hit home what we actually achieved’

There are still times when Georgia Stanway walks into the Bayern Munich dressing room and some of her German teammates start to sing ‘Sweet Caroline’.There’s also a curiosity to that, beyond the idea that song accompanied what you might have presumed was a painful defeat for many of the Euro 2022 runners-up.It is actually one of the rare moments when Stanway really thinks about what happened in the summer at all. There just hasn’t been time to.The 23-year-old is in Bayern’s academy and - other than talking to The Independent - it’s a rare moment to just sit back amid...
SOCCER・2 HOURS AGO
The Independent

A comfortable 4-0 win over Bochum has boosted RB Leipzig’s confidence as they prepare to host Celtic in the Champions League.Marco Rose now has two wins and two defeats from four games in charge of the German club and will be hoping to kick-start their continental campaign.Two defeats to open their group efforts leave Leipzig fighting to get back on track, and Rose’s side can ill-afford a defeat to Celtic.A single point earned against Shakhtar Donetsk in Warsaw means Ange Postecoglou sit above their opponents in what looks to be a competitive battle for the second qualification place in a...
UEFA・37 MINUTES AGO