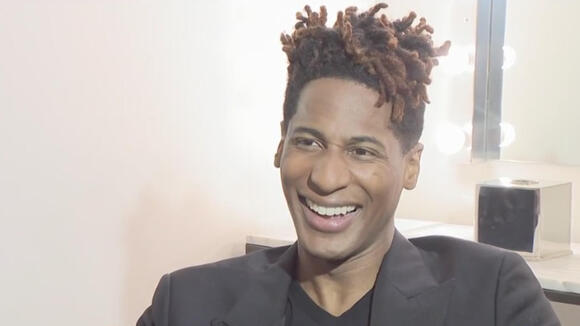 NEW YORK -- Not only is he the bandleader on "The Late Show with Stephen Colbert," a Golden Globe and Oscar winner, and now a multi- Grammy Award winner -- Jon Batiste is also the co-artistic director of the National Jazz Museum in Harlem .

His co-artistic director, Christian McBride, also won a Grammy this weekend, adding to his collection.

CBS2's Alice Gainer sat down with both local Grammy winners about their big night.

Batiste sang and danced his way into the interview, bringing Gainer to her feet, too. That's his magic.

"The energy I felt sitting my sweatpants on the couch at home [watching Batiste's Grammys performance], I wanted to get up and dance, so I can't even imagine how electric that was," Gainer said.

"You see everybody [in the audience]'s up. At that point, I blacked out. I literally just, I was so in the spirit, you know, my jacket came off, we went into the crowd," Batiste said.

Batiste took home five Grammys, including "Album of the Year."

"The art is always bigger than us as creatives, so none of us can be the best," Batiste said.

It's a win he shares with his father, grandfather and nephews, who are all featured on the album.

"Your 7-year-old nephew was a part of this win. What was his reaction?" Gainer asked.

"Oh, he was trying to see BTS," Batiste said, laughing.

"We're not looking at this time as something that's just-- this is the hard part and we'll get to the good part. No, there's good parts in this, too," he said.

Playlists of all kinds of music have been therapeutic for them. He hopes his music does the same for someone else.

At a recording studio a few blocks away, Christian McBride Big Band rehearsed.

Jazz bassist McBride, a New Jersey resident, won his eighth Grammy. This one was for Best Large Jazz Ensemble Album.

"I didn't have much time to really enjoy it because, as you can see, you know, less than 36 hours later, we're rehearsing," McBride said.

McBride says awards are nice but what means the most is "when somebody like Chick Corea says, 'Hey, I like the way you play. I want you to play with me' ... McCoy Tyner or Herbie Hancock ...  I'll give up all eight of those Grammys just to remember James Brown kind of saying, 'OK, you cool.'"

He's hoping to keep it cool as he trains young musicians.

"So we can eventually stop having to ask the question, 'Is jazz dying?' ... It's my job to make sure that question gets asked less," McBride said.

It sounds alive and well.

NEW YORK - The New York City Ballet's Fashion Gala takes place Wednesday night. Solange Knowles composed the first piece. She's only the second Black woman in history to do so. Knowles, whose big sister is Beyoncé, says her score will be performed by the city ballet orchestra and choreographed by Gianna Reisen. The event will honor actress Sarah Jessica Parker, who serves as the ballet's vice chair. The score will also be played at five shows in October, and five more in May.
NEW YORK CITY, NY・1 DAY AGO