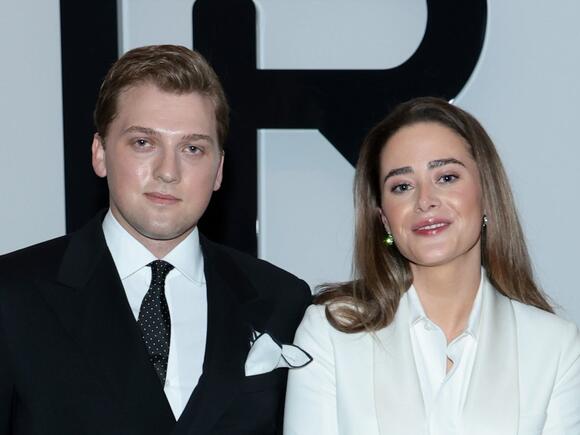 President Joe Biden and first lady Jill Biden will host their granddaughter’s wedding reception at the White House in November.

She is the eldest of the Biden grandchildren and is the daughter of Hunter Biden and Kathleen Buhle.

The White House reception is scheduled for 19 November, less than two weeks after the midterm elections. It is not known where the wedding ceremony will take place.

The first lady’s communications director Elizabeth Alexander told CNN: “The first family, the couple, and their parents are still in the planning stages of all of the wedding festivities and look forward to announcing further details in the coming months.”

Ms Biden tweeted: “Peter and I are endlessly grateful to my Nana and Pop for the opportunity to celebrate our wedding at the White House. We can’t wait to make our commitment to one another official and for what lies ahead.”

She is a Washington-based lawyer and he is in his final year of law school at the University of Pennsylvania. They have been together for approximately four years after meeting on a date in New York City arranged by a mutual friend.

Recent White House weddings include Jenna Bush, daughter of President George W Bush, who was married at the family ranch in Crawford, Texas, but enjoyed a reception for 600 people at the executive mansion in May 2008.

Prior to that, Tricia Nixon walked down the aisle in the Rose Garden to marry Edward Cox in 1971 during her father’s first term.

Both of Lyndon Johnson’s daughters also celebrated their weddings at 1600 Pennsylvania Avenue  — Lynda Bird Johnson was married in the East Room in 1967 and her sister Luci held a reception at the White House after a ceremony at a nearby church.

There is a long history of White House nuptials dating back to the 1800s including the children of presidents Monroe, Adams, Tyler, and Grant, as well as both daughters and a niece of President Woodrow Wilson in the early 20th century.

It should be Hunter hosting his daughters wedding. Oh well let the taxpayers pay for it. Don’t thank Nana and Pop thank the hard working taxpayers

I do not think that this is appropriate. There are plenty of venues out there they could use! Biden considers it a part-time residence anyway he’s never there on weekends he’d rather be somewhere else. Let him take his wedding party somewhere else!

Outgoing White House chief of staff Ron Klain burst into tears Wednesday as he talked about his boss, President Joe Biden, and his decades of work with him. “This is the best job I've ever had,” said Klain, immediately crying after he said he couldn't promise a tear-free speech. Biden gently patted him on the back. The East Room was packed with White House staff, aides and Cabinet members there to send Klain off, a Biden loyalist who has worked for the president off and on for 36 years. Klain said that through it all, Biden has been a...
DELAWARE STATE・7 HOURS AGO
Eden Reports

On Tuesday, President Joe Biden displayed another instance of questionable behavior. A reporter asked him a question about the end of the U.S. state of emergency, which is set for May 11th.
1 DAY AGO
Business Insider

McKay Coppins, a journalist at The Atlantic, said he was "taken aback" by how often he heard MAGA Republicans say they wish Trump was dead.
MICHIGAN STATE・1 DAY AGO
The Independent

Stormy Daniels offered a fierce blowback to Donald Trump whose attempt to ridicule the adult film star may have backfired as he seemingly appeared to acknowledge their alleged affair.Ms Daniels thanked the former president for “admitting” to their alleged affair despite previously declaring that he “never had an affair”. She also mocked the one-time president for using wrong grammar in his Truth Social post.The war of words between the two on social media came as New York City prosecutors began presenting evidence to a grand jury about the “hush money scheme” Mr Trump is accused of using to keep...
22 HOURS AGO
NBC News

WASHINGTON — A routine House committee meeting erupted into a heated, nearly hourlong debate Wednesday over the Pledge of Allegiance, with one Democratic lawmaker saying that "insurrectionists" who backed former President Donald Trump's efforts to overturn the 2020 election should be banned from leading it. The fiery back-and-forth took...
WASHINGTON STATE・14 HOURS AGO
The Independent

Donald Trump has repeated claims that he trusts Russia’s president Vladimir Putin over his own director of national intelligence.The former president was denounced by both Republicans and Democrats when he originally made the claim at a 2018 joint press conference with Vladimir Putin. Now, he has repeated them on his Truth Social platform.His post described members of the intelligence community, presumably including the CIA, NSA, FBI and cybersecurity agencies, as “lowlifes”.“Remember in Helsinki when a 3rd rate reporter asked me, essentially, who I trusted more, President Putin of Russia, or our ‘Intelligence’ lowlifes[?]” wrote the former president in a...
WASHINGTON STATE・1 DAY AGO
The Independent

Hunter Biden has asked state and federal officials to launch investigations into leading conservative figures who helped spread claims based on private information discovered on a laptop he allegedly dropped off at a Delaware repair shop.In a series of letters to the Justice Department, the Delaware attorney general’s office, the IRS, and others, the president’s son called for probes of individuals like former New York mayor and Trump ally Rudy Giuliani, as well as conservative agitator Steve Bannon, for their role in spreading the laptop story, which was seized upon by political opponents of the president.Ted Goodman, an advisor...
DELAWARE STATE・5 HOURS AGO
The Independent

Minnesota Representative Ilhan Omar is claiming a Republican-led push to boot her from the House Foreign Affairs Committee is rooted in racism and Islamophobia and meant to appease bigots in the House GOP conference.House Speaker Kevin McCarthy has pledged to force a vote on removing her from the influential panel, where she has held a seat since she was first sworn in as a member of Congress in 2019. Mr McCarthy and other Republicans have claimed that her criticism of the Israeli government amounts to antisemitism and have pointed to a comment she made about Israel having “hypnotized” the...
MINNESOTA STATE・2 DAYS AGO
The Independent

Donald Trump has escalated his feud with Ron DeSantis by posting a video of the Florida governor in which he says wants to be like former House Speaker Paul Ryan, whose now a Trump critic. Mr Trump’s only comment on the footage, which was posted on his Truth Social page on Tuesday, was “wow!”“I would be somebody who would be different, I think you see that I’ve been recognized nationally as being somebody who would be different, who would be a leader, who could be somebody like a Paul Ryan very quickly,” Mr DeSantis says in the footage. Following...
FLORIDA STATE・15 HOURS AGO
The Independent

More U.S. adults disapprove than approve of the way President Joe Biden has handled the discovery of classified documents at his home and former office, a new poll shows, but that seems to have had little impact on his overall approval rating. The new poll from The Associated Press-NORC Center for Public Affairs Research finds 41% of Americans say they approve of how Biden is handling his job as president, about the same as the 43% who said that in December. In the new poll, 77% of Democrats approve of how Biden is handling his job, while 91% of...
ALABAMA STATE・2 HOURS AGO
The Independent

House Republicans are preparing to oust Democratic Rep. Ilhan Omar from the House Foreign Affairs Committee for her past comments critical of Israel, an escalation of tensions after Democrats last session booted far-right GOP lawmakers from committees over their incendiary, violent remarks.Thursday's vote is a quick turnaround by House Speaker Kevin McCarthy to solidify wavering Republican support for moving against the Somali-born Muslim woman in the new Congress. Some GOP lawmakers had expressed reservations about taking such a dramatic step. Removal of lawmakers from their House committees was essentially unprecedented until the Democratic ousters of hard-right Republicans Rep. Marjorie...
GEORGIA STATE・2 HOURS AGO