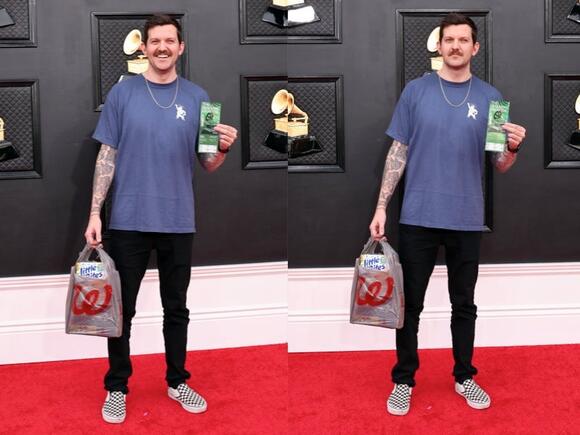 Dillon Francis sparked confusion after arriving at the 64th annual Grammy Awards in a casual outfit and holding a plastic bag of snacks from Walgreens.

On Sunday, the musician arrived on the red carpet in Las Vegas, Nevada, in a pair of black jeans, a blue T-shirt, and Vans. He accessorised the informal red carpet look with a gray plastic bag from the pharmacy, which appeared to be filled to the brim with snacks including a box of Little Bites muffins.

The bag of food didn’t deter the record producer from posing on the red carpet, however, as he stood for photographs alone and with fellow musician Diplo, who opted for a more-formal black suit, which he paired with blue hair.

On social media, the red carpet accessory was met with confusion and praise from viewers, who questioned and applauded the bag of Walgreens snacks.

“Dillon Francis showing up to the Grammys with a Walgreens bag full of snacks was definitely the move,” one person wrote, while another said: “No way Dillon Francis came like this, I’m CRYING.”

“It’s nice to know both @DillonFrancis and I like the same flavour of Little Bites,” someone else joked.

According to another viewer, Francis was “really doing the least”. However, someone else claimed “the best Grammys red carpet look” went to Francis “hands down”.

5 coat trends that will be huge this season

Are you excited for coat season?After a summer that seemed to last forever (not that we’re complaining) and a mild start to autumn, there hasn’t been much call for proper puffers, parkas and trenches yet.We haven’t been able to enjoy that cosy feeling of bundling up for a brisk day, but that’s set to change as the clocks go back and chillier weather arrives.It’s great news for fashion lovers, because this season’s high street collections are full of cool, catwalk-inspired coats ready to refresh your look.Here are five fab trends to style with your autumn/winter wardrobe…1. Pink ...
APPAREL・23 HOURS AGO