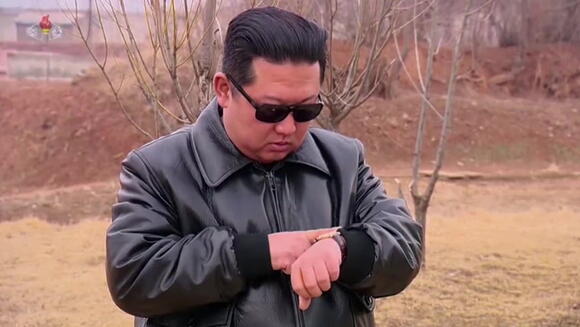 Ms Kim’s comments come during heightened tension between the two nations over the North’s spate of weapons tests this year, including its first intercontinental ballistic missile (ICBM) launch in more than four years.

On Friday, South Korea’s defense minister Suh Wook said the country has the ability and readiness to launch precision strikes on North Korea if it detects any missiles fired at South Korea.

Seoul has long maintained such a pre-emptive military strategy to cope with North Korea’s growing missile and nuclear threats, but it was still highly unusual for a senior Seoul official under the outgoing administration of president Moon Jae-in to publicly discuss it.

“South Korea may face a serious threat owing to the reckless remarks made by its defence minister. [The country] should discipline itself if it wants to stave off disaster.” According to South Korea’s spy service, Ms Kim is in charge of relations with Seoul and Washington and is the North’s number two official behind her brother.

Pak Jong-chon, a secretary in the Workers’ Party’s central committee, on Sunday warned that “any slight misjudgment and ill statement rattling the other party under the present situation” may trigger “a dangerous conflict and a full-blown war” between the two nations.

The United States has a “strong alliance” with the “Republic of North Korea,” Kamala Harris said during a speech in the Korean Demilitarized Zone (DMZ) on Thursday, 29 September.The US vice president appeared to intend to reference the Republic of Korea, the official name of South Korea.“It is an alliance that is strong and enduring,” Ms Harris added, before professing support for South Korea’s defenses against the North Korean government.The White House appeared to remove “North” from its transcript of Ms Harris’s remarks.Sign up to our newsletters. Read More Harry Styles breaks US Billboard chart recordWhy is the pound weak after the mini-Budget announcement?'There is no cap': Martin Lewis warns amid energy crisis
CONGRESS & COURTS・2 DAYS AGO
The Independent

The United States’ candidate Doreen Bogdan-Martin has beaten Russia’s Rashid Ismailov in an election to head the International Telecommunication Union, which oversees internet and communication standards.The election was seen as a ideological race between a continuation of an internet led by the US , or a “humanization” of the infrastructure against American “dominance” online, as Mr Ismailov described it.“The world is facing significant challenges – escalating conflicts, a climate crisis, food security, gender inequalities, and 2.7 billion people with no access to the internet,” said Ms Bogdan-Martin after winning. “I believe we, the ITU and our members, have an opportunity...
U.S. POLITICS・1 DAY AGO
The Independent

Abducted, beaten, tortured: What happened to Ukrainians who refused to vote in Russia’s referendums

Terrified Ukrainians have told of being abducted at gunpoint from their homes, held in solitary confinement and tortured for refusing to vote in Russia’s “sham” referendums.Some were dragged to polling stations by volunteers carrying pro-referendum leaflets, according to witnesses who also spoke of “informers” reporting anyone suspected of opposing annexation to the occupying forces.As president Vladimir Putin announced the annexation of four areas of southern and eastern Ukraine, in a land grab that the West says it will refuse to recognise, residents in the occupied areas of Donetsk, Luhansk, Zaporizhzhia and Kherson, have told The Independent how separatist troops...
PUBLIC SAFETY・1 DAY AGO
The Independent

Russian state television programmes this week were all too happy to repeat claims made by Fox News host Tucker Carlson that the United States may have had a role to play in damaging the Nord Stream pipelines. Carlson stated on his Fox News programme on Tuesday, with no evidence, that US sabatoge could be responsible for damage to the two pipelines running from Russia to Germany. Carlson used a tweet from a Polish EU parliamentarian and a statement made by President Joe Biden in February opposing the activation of the pipeline to suggest that he may have had some...
POLITICS・2 DAYS AGO

Matthew Heath, a former U.S. Marine corporal from Knoxville, Tennessee, who was arrested in 2020 at a roadblock in Venezuela on what the State Department has called "specious" weapons charges, was released today along with six other Americans imprisoned in the South American country. In a rare softening of hostile relations, the White House said Saturday Venezuela freed the seven Americans and the United States released two nephews of President Nicholas Maduro's wife who had been...
TENNESSEE STATE・9 MINUTES AGO
The US Sun

THE chief of Europe’s largest nuclear plant is feared to have been kidnapped by Russian forces. Ukraine’s state nuclear firm Energoatom said Ihor Murashov was seized at about 4pm on Friday. It was after Vladimir Putin said he was annexing four Ukraine regions including Zaporizhzhia where the plant...
PUBLIC SAFETY・13 MINUTES AGO
The Independent

Venezuela on Saturday freed seven Americans imprisoned in the South American country in exchange for the release of two nephews of President Nicholas Maduro's wife who had been jailed for years by the United States on drug smuggling convictions, a senior U.S. official said.The swap of the Americans, including five oil executives held for nearly five years, is the largest trade of detained citizens ever carried out by the Biden administration. “We are relieved and gratified to be welcoming back to their families today seven Americans who had been wrongfully detained for too long in Venezuela,” said Joshua Geltzer,...
U.S. POLITICS・5 HOURS AGO

Seven American prisoners have been released from Venezuela after years of captivity, including the remaining five members of the so-called “CITGO 6” US oil executives who were taken into custody in Caracas in 2017.“I am grateful for the hard work of dedicated public servants across the U.S. Government who made this possible, and who continue to deliver on my Administration’s unflinching commitment to keep faith with Americans held hostage and wrongfully detained all around the world,” Mr Biden said in a White House statement. “Today, we celebrate that seven families will be whole once more,” he added. “To all...
U.S. POLITICS・1 HOUR AGO
The Independent

Ukrainian soldiers have closed in around Russian troops in a key Russian-controlled Donetsk town, according to Kyiv officials. Footage reportedly shows Ukrainian soldiers raising the country's flag at the entrance of Lyman, a town that was captured by Russia back in May. After Vladimir Putin proclaimed the annexation of the...
MILITARY・9 HOURS AGO
The Independent

There are moments in history that appear as critical to the world as they are terrifying. Just this century: the 9/11 attacks in 2001; the U.S. “shock-and-awe″ war on Saddam Hussein’s Iraq two years later; the coronavirus pandemic in 2020 killed millions and upended life; and most recently the Feb. 24 invasion of Ukraine by Russia, bringing ruinous war back to Europe.
POLITICS・1 DAY AGO
The Independent

To roars of approval from whipped-up followers, Jair Bolsonaro declared at a campaign rally: “This will end one of three ways, prison, victory or death – and I will not go to prison.”Victory appears to be slipping from him as Brazil draws closer to election day.  But behind the bombast, the hard-right president still has the power to unleash destructive forces that could seriously imperil the democratic future of South America’s largest nation.Bolsanaro is trailing by as much as 17 percentage points behind rival candidate Luiz Inácio Lula da Silva in opinion polls. It means the leftist former president, more...
ELECTIONS・1 HOUR AGO

U.S. captives 'prayed for death' on brutal ride from Ukraine

Even after three months of captivity that included execution threats, physical torture, solitary confinement and food deprivation, it was the ride to freedom that nearly broke Alex Drueke, a U.S. military veteran released last week with nine other prisoners who went to help Ukraine fight off Russian invaders.His hands were bound. His head was covered by a plastic bag, and the packing tape holding it in place was secured so tightly it it caused welts on his forehead. Drueke said he and fellow American prisoner Andy Huynh reached their limit in this state during the transit, which occurred in...
MILITARY・1 DAY AGO
The Independent

An attack by armed separatists on a police station in a southeastern city killed 19 people, including four members of Iran's elite Islamic Revolutionary Guard, Iran's state-run IRNA news agency reported Saturday.The assailants in Friday's attack hid among worshippers near a mosque in the city of Zahedan and attacked the nearby police station, according to the report. IRNA quoted Hossein Modaresi, the provincial governor, as saying 19 people were killed. The outlet said 32 Guard members, including volunteer Basiji forces, were also wounded in the clashes.It was not immediately clear if the attack was related to nationwide antigovernment protests...
PUBLIC SAFETY・7 HOURS AGO
The Independent

‘We want a free Iran’: Thousands take to London streets to protest death of Mahsa Amini

Thousands of people protested in the streets of London on Saturday following the death of 22-year-old Mahsa Amini in Tehran, Iran.On September 16, Ms Amini – also known by her Kurdish name, Jina Amini – died after being detained by so-called ‘morality police’ for allegedly not following the country’s dress code while visiting the capital city.In the days since her death, demonstrations have erupted globally and at least 83 protesters have been killed in Iran, according to human rights groups.At Trafalgar Square in central London, thousands of protestors held flags, sang protest songs and led chants against the...
PROTESTS・3 HOURS AGO