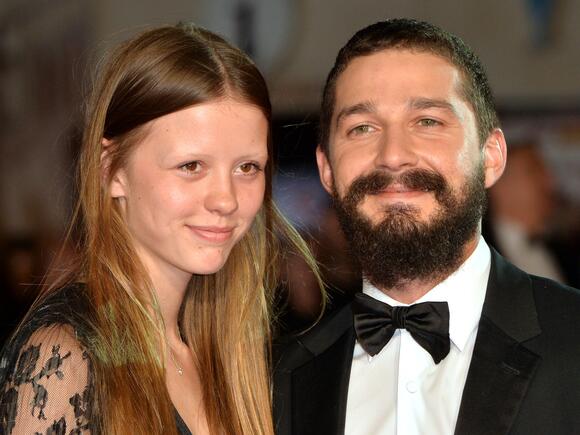 Actors Shia LaBeouf and Mia Goth have welcomed their first child together.

According to a new report, LaBeouf, 35, and Goth, 28, were spotted walking in Pasadena, California on Friday pushing a baby stroller.

It it unclear when the baby was born or what sex the baby is, however Goth’s pregnancy was confirmed in Febrary after the actor’s baby bump was spotted while she was running errands, People reports.

LaBeouf and Goth were first linked after they filmed Nymphomaniac: Vol. II together in 2012.

Goth later appeared in a music video that LaBeouf directed in 2014.

The couple have been married since 2016, when they wed in Las Vegas. They briefly split in 2018, even filing for divorce, before rekindling their romance soon after.

Meanwhile, earlier this week Hilaria Baldwin revealed that she and actor Alec Baldwin were expecting their seventh child together .

Hilaria shared her pregnancy news to Instagram on Tuesday, where she shared a video of her family and wrote: “After many ups and downs over the past few years, we have an exciting up and a huge surprise: another Baldwinito is coming this fall.”

Hilaria said that she and Alec were “beyond happy with the surprise” and before she fell pregnant they were “pretty sure their family was complete”.

In the Instagram video, Hilaria adds: “I’m sharing with you the moment we told the kids - as you can see, they are super excited! Our new baby is a very bright spot in our lives. A blessing and a gift during such uncertain times.”

It comes just months after Alec was involved in a fatal shooting on the set of his film Rust which killed Halyna Hutchins.

Judy Tenuta, a brash standup who cheekily styled herself as the "Goddess of Love” and toured with George Carlin as she built her career in the 1980s golden age of comedy, died Thursday. She was 65. Tenuta died Thursday afternoon at home in Los Angeles, with her family around...
LOS ANGELES, CA・9 HOURS AGO
The Independent

‘The disrespect!’: Fans react after Kim Kardashian admits she doesn’t know what tortellini is

Kim Kardashian has left fans reeling after admitting she doesn’t know what tortellini is.The 41-year-old was shown dining out in an Italian restaurant during Milan Fashion Week in the latest episode of The Kardashians, when she asked a waiter, “What is tortellini?”The waiter replied that the classic pasta dish was “like a ravioli”, prompting the billionaire reality star to ask for “any[thing] that’s not spaghetti”. Fans of the show took to social media to express their disbelief at the billionaire’s lack of culinary knowledge. “Sadly, I’m watching The Kardashians on Hulu and Kim asked the waiter what tortellini is...
CELEBRITIES・50 MINUTES AGO
The Independent

Fans of the royal family have been stunned by the “striking familial resemblance” between photographs of the Queen Mother as a child and her great-great granddaughter, Princess Charlotte of Wales.Pictures of the late Queen Mother from the archives of Glamis Castle in Scotland were revealed on the historic site’s Instagram and Twitter accounts on Monday (3 October).One photo shows the young Lady Elizabeth Bowes Lyon sitting against a stone wall in a wide brim hat and a white dress, while the second is a portrait of her holding a stalk with flowers.The castle’s social media team also posted a...
CELEBRITIES・3 DAYS AGO

Kate Garraway reflected on her husband Derek Draper’s recovery from Covid-19 on the latest episode of ITV’s DNA Journey.The documentary, which invites two celebrities to discover new truths about their ancestry and bloodline, featured Garraway and fellow presenter Alison Hammond.Draper was hospitalised with Covid-19 in March 2020 and was later placed under a medically induced coma. After waking up several months later, he was discharged and able to go home in April 2021 – more than 12 months after he was first admitted.He now receives 24-hour care at home, provided by Garraway and a team of healthcare professionals.Opening up...
PUBLIC HEALTH・1 HOUR AGO
The Independent

House of the Dragon star Olivia Cooke has candidly revealed that she experienced a "full mental breakdown" six years ago.The actress, who stars Alicent Hightower, the daughter of King Viserys I Targaryen’s righthand man in the Game of Thrones prequel, told The Guardian about her past mental health struggles. “It was bad, bad. Awful, actually... I was working all the way through. I was very good at hiding it," Ms Cooke said.Click here to sign up to our newsletters.
MENTAL HEALTH・2 DAYS AGO