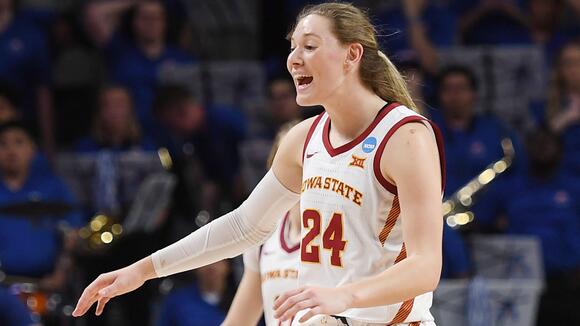 Iowa State star Ashley Joens solidified herself as the best small forward in the nation last year. It's a title she can keep after another successful season.

The Iowa City native made a compelling case again this season by averaging 20.3 points, 9.5 rebounds and 1.8 assists per game this season. Joens shot 37.6% from beyond the arc and tallied 18 double-doubles.

She was a big reason for the Cyclones' historic success this season. Joens, a senior, helped guide Iowa State to a program record 28 wins along with a record-setting 14 victories in Big 12 Conference play. The Cyclones also reached the Sweet 16 for the first time since 2010.

PREVIOUSLY:Iowa State star Ashley Joens to return for one more season in Ames

The 2021-22 season was a historic one for Joens as well. She became Iowa State's all-time leading scorer by passing Angie (Welle) Edinger's mark. The success has grabbed plenty of attention along the way.

Joens was named a Second-Team All-American by the Associated Press. She was also selected as an All-American by the United States Basketball Writers Association. Joens is the second Iowa State player to win the Cheryl Miller Award, joining Bridget Carleton.

Joens isn't done etching her name in Iowa State history. She announced late last month she will take advantage of the extra season of eligibility awarded by the NCAA due to the COVID-19 pandemic and come back for another season at Iowa State.

Tommy Birch, the Register's sports enterprise and features reporter, has been working at the newspaper since 2008. He's the 2018 and 2020 Iowa Sportswriter of the Year. Reach him at tbirch@dmreg.com or 515-284-8468. Follow him on Twitter @TommyBirch.