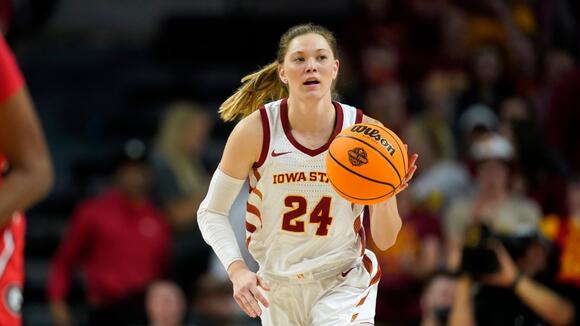 Joens led the Cyclones with 20.3 points and 9.5 rebounds, while dishing 1.8 assists. The Iowa City, Iowa native, elevated her game from beyond-the-arc, connecting on a career-best 91 triples, while shooting 37.6 percent from beyond the arc. She also totaled 18 double-doubles on the year.

She helped the Cyclones to a program record 28 wins, along with a record-setting 14 conference wins. Iowa State finished league action second in the conference, spent much of the 2021-22 season in the AP Top 10.

She recently solidified herself as the most prolific scorer in Iowa State basketball history, scoring 2,369 career points. She also joins Angie Welle as the only other Cyclone to score 2,000 points and haul in 1,000 rebounds.

Joens has received many accolades to commemorate the season, including being named a Second-Team All-American by the Associated Press and USBWA. On Thursday, she also became the second Cyclone in school history to earn a spot on the prestigious WBCA Coaches’ All-America Team, joining Cyclone great Bridget Carleton in 2019.

The Cheryl Miller Award has been presented to the top small forward in women’s college basketball the past five seasons. Iowa State has claimed the honor three times, with Carleton winning in 2019. UConn’s Gabby Williams (2017-18) and Oregon’s Satou Sabally (2019-20) are the other two winners of the award.

SIOUX CITY, IOWA (KCAU) – With heat on the hardwood up to boiling temperatures and the first ever girls wrestling Super Regionals in the books, the sports scene around Siouxland was full of excitement. With it, great moments to go around as we look at the best of the best in the newest edition of […]
SIOUX CITY, IA・8 HOURS AGO
KCAU 9 News

Stray of the Day: Meet Lexi

A jury convicted an Iowa college student Wednesday of three counts of first-degree murder in the fatal shooting of his parents and younger sister in their home.
CEDAR RAPIDS, IA・4 DAYS AGO
KCAU 9 News

Stray of the Day: Meet Light

SIOUX CITY, Iowa (KCAU) — Meet today’s Stray of the Day! This is light, a 2-to-3-year old, male, orange-and-white tabby cat. He was found abandoned on the 3500 block of 4th avenue. The shelter says he’s a mellow, laidback kind of guy who just wants a warm snuggle buddy on these cold winter days. Light […]
SIOUX CITY, IA・2 DAYS AGO
KCAU 9 News

Sioux City encourages residents to sign up for CodeRED

An emerald ash borer infestation has been discovered in Union County, according to the South Dakota Department of Agriculture and Natural Resources (DANR).
UNION COUNTY, SD・2 DAYS AGO
KCAU 9 News

Shortly before 10 p.m. Dec. 5, 2022, multiple officers from the Davenport Police Department responded to the area of the 2700 block of North Pine Street after a report of gunfire.
DAVENPORT, IA・2 DAYS AGO
KCAU 9 News

Sioux City and other Siouxland communities are declaring a snow emergency ahead of expected winter weather.
SIOUX CITY, IA・2 DAYS AGO
KCAU 9 News

The Iowa Court of Appeals denied the appeal of a Sioux City man who strangled a woman then set fire to her hotel room.
SIOUX CITY, IA・3 DAYS AGO
KCAU 9 News

The Sioux City Police Department has issued a reminder saying to make sure you're properly parking your vehicle during a Snow Emergency.
SIOUX CITY, IA・2 DAYS AGO
KCAU 9 News

Local group offers resources for those in mental health crisis

A trial date has been set for the wife of Woodbury County Supervisor Jeremy Taylor who she was federally charged with voter fraud.
WOODBURY COUNTY, IA・2 DAYS AGO