How population estimates could be holding up George Wythe funding 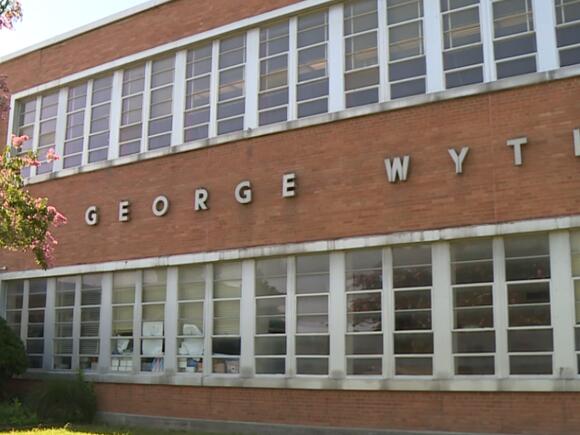 RICHMOND, Va. -- The back and forth continues between the Richmond School board and the Richmond council over what the correct projection of population will be for Richmond’s Southside.

It’s a situation contributing to holding up the release of funding to rebuild George Wythe High School.

The cracks and crumbling facility are why Richmond’s George Wythe High School is said to be a priority for all city and school board leaders. However, it’s the prediction of how many students will fill these seats that are stalling the process. Members of both the city council and the school board can’t agree on that number. The majority of the school board voted in favor of a 1,600 capacity.

While many city members are in favor of 2,000 capacity.

Those are in favor of the 2,000 number base it on the following projections of numbers that show continued growth in Richmond.

A Cooper Center projection that analyzed the 2010 census said it predicts the Richmond area will continue to grow. An American Community Survey that surveys yearly sees a similar trajectory of increased growth.

“The city of Richmond has increased its population and that’s a trend we’ve seen that is different than in the past,” Tom Shields, University of Richmond’s Associate Dean for Academic and Student Affairs, said.

Those who are arguing for the 2,000 capacity also cite a study by the firm Cropper that was contracted by the district in 2019.

In reality, officials say George Wythe's current enrollment is close to 1,300, nearly a 200 person difference from what the firm projected for the year.

School board members like Jonathan Young, who supports the build for 1,600 students, say they want to use the real data over a projection that is already off. He also wants to see the roughly 2,500 vacant seats in high schools in the city utilized before they spend more money creating more space.

At this time, it’s unclear when a decision will be made on capacity. The school board is set to meet again in April

New Va. law means parents must be alerted to sexually-explicit content at school

The policy reads that all schools must ensure parents have advanced notice if schools intend to use any sexually-explicit material.
VIRGINIA STATE・1 DAY AGO
WTVR CBS 6

Among the flowers at Lewis Ginter Botanical Garden Sunday morning were cyclists, swimmers, garden staff, and others, brought together to celebrate the life of 49-year-old Carla "Jonah" Holland.
RICHMOND, VA・4 HOURS AGO
WTVR CBS 6

Ian knocks out power for thousands in Virginia

Thousands are without power across Virginia Friday night as Ian continues moving northwestward through the Carolinas with the remnants near Roanoke by Saturday evening.
VIRGINIA STATE・2 DAYS AGO
WTVR CBS 6

As Hurricane Ian makes its way north, many events are being changed or canceled ahead of potential storms. Here's a list of the events in Central Virginia that have been impacted.
RICHMOND, VA・2 DAYS AGO

What's behind the increase of kids involved in gun violence

Pandemic-driven stress and anxiety, high levels of gun possession, and reduced trust in police have contributed to an increase in the number of teenagers shot, a criminal justice professor said.
HENRICO COUNTY, VA・2 DAYS AGO
WTVR CBS 6

Officers responded to the 900 block of McDowell Road, near Chippenham Parkway and Midlothian Turnpike, in South Richmond, Va. at about 8:19 a.m.
RICHMOND, VA・2 DAYS AGO
WTVR CBS 6

Members of the public criticized a lack of transparency in how the city presented the landscaping project.
RICHMOND, VA・3 DAYS AGO

The fast-casual eatery is planning to open an outpost in the strip center at 1205 Westover Hills Blvd., while keeping its existing West Main Street location in the Fan.
RICHMOND, VA・3 DAYS AGO
WTVR CBS 6

Virginia students walk out of school over proposed transgender policies

Students from nearly 100 schools across Virginia participated in a walkout Tuesday in opposition to the Department of Ed's proposed 2022 model policies on transgender students.
RICHMOND, VA・5 DAYS AGO
WTVR CBS 6

Twenty-five people were displaced after a fire at an apartment complex on Richmond's Southside early Sunday morning.
RICHMOND, VA・21 MINUTES AGO
WTVR CBS 6

Ian is expected to drop between 2" - 4" of rain on the Richmond area with higher totals south of the city.
RICHMOND, VA・3 DAYS AGO

Council members voted unanimously in support of the minimum terms and conditions in connection with the redevelopment of 67 acres in Scott's Addition.
RICHMOND, VA・5 DAYS AGO
WTVR CBS 6

Frustrated and afraid for her children's safety, Iesha Evans contacted the CBS 6 Problem Solvers fed up with the conditions at her Hillside Court Housing Community apartment.
RICHMOND, VA・2 DAYS AGO
WTVR CBS 6

Richmond Fire recommends Virginians do this ahead of anticipated heavy rain

Kevin Knight said the two primary concerns for the department are increased water levels on the James River and standing or flood waters on city streets.
RICHMOND, VA・3 DAYS AGO
WTVR CBS 6

Two people from Richmond killed on I-95 in Spotsylvania

Two people from Richmond were killed in a three-vehicle crash on Interstate 95 in Spotsylvania County on Monday.
SPOTSYLVANIA COUNTY, VA・3 DAYS AGO

With rain in the Virginia forecast on Friday and Saturday, several high schools have rescheduled Friday night football to Thursday.
RICHMOND, VA・4 DAYS AGO
WTVR CBS 6

VACORP said they sent a preliminary estimate of what they thought the reconstruction of Fox Elementary School should cost using materials of similar type and quality.
RICHMOND, VA・6 DAYS AGO
WTVR CBS 6

UrgentVet fashions itself the middle ground between a pet owner’s usual veterinarian and an emergency room visit.
RICHMOND, VA・4 DAYS AGO