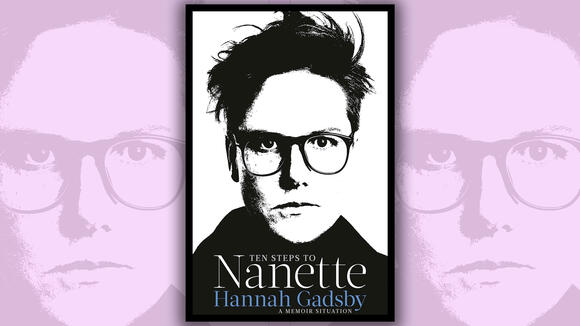 It’s taken Hannah Gadsby the better part of four years to process the international success of her Netflix special Nanette , but it’s taken her 40 more to process everything that led up to her making it. In her new book, Ten Steps to Nanette: A Memoir Situation , Gadsby writes that she never meant to become a comedian in the first place, much less a household name for threatening to quit comedy, as she did in her 2018 special.

That Gadsby is writing about the special in 2022 is a testament to Nanette ’s cultural influence, and the conversations and debates it prompted about comedy. With Nanette , Gadsby raised the idea that modern comedy seems to require a punching down of the kinds of identities Gadsby herself embodies. After years of performing self-deprecating routines onstage, a “get them before they can get you,” approach to jokes, Gadsby declared in Nanette that she was done with that kind of humor. In the book, she tackles the subject with a few properly aimed jabs at those who seek to keep women like her from taking up space. “I wanted to deflate the egos of mythologised artists and I could think of no better medium than stand-up comedy to do this with,” she writes. “Given that it is also an industry full of immature boys fighting in a vacuum to be the best at something fewer and fewer people actually care about.”

But largely, Gadsby reveals, Nanette was born out of the desire to lean away from traditional comedy. The plan, she writes, was to “repurpose comedy into something that could allow me to express the heat of my anger and the pain of my trauma but without transferring it.” In that, Gadsby acknowledges, without regrets, she knew she’d be cutting loose “the most toxic” of her peers.

Structured as a step-by-step process to creating Nanette , the book is filled with many footnotes that offer details of Gadsby’s life that were only hinted at in the show. Ten Steps to Nanette addresses the weighted issues of historical gender-based violence, misogyny, sexual abuse, homophobia, ableism and fatphobia, all of which Gadsby has directly experienced “I am triggering all the warnings,” she writes.

Readers will learn how Gadsby’s self-esteem and world view were shaped by her mother’s blunt candor and frequent judgment. The book confirms that the bit from Nanette where Gadsby said her mother likened her coming out as a lesbian to coming out as a murderer was based in reality. It also allows Gadsby to expand the story and share how her own sense of humor was directly influenced by her mother’s strength and outspokenness.

One large thread throughout the book details the political fight over equal marriage in her home of Australia, specifically the southern island of Tasmania, where homosexuality was illegal until 1997. Another details her struggles with depression, anxiety, and the atypical thinking she didn’t know was part of her autism. All heavy topics, but just like the stage show, Gadsby finds a measured way to offer respectful and insightful reflection on the terrible things she and others have endured while also pointing out the idiosyncrasies and flaws in logic that she can turn into a wisecrack. The stories from her life are paralleled by what was happening around her politically, even when she was too young to be aware of the legalized homophobia coloring her experiences feeling like an outsider. Gadsby writes that it ultimately impacted not only what went into Nanette , but her life as a gay person in Australia.

Gadsby’s talent is in asking viewers (or readers) to take things from her point of view as an autistic, gender-non conforming Austrailan lesbian of size without being fully self-deprecating, at least not without cause. She defined these differences as “humility versus humiliation” in the Netflix special, and Ten Steps further investigates this. ( Nanette , she writes, “is basically Eat Pray Love for autisitic queer women.”)

The challenges of the world Gadsby grew up in and the difficulties of being a public figure now has given her an outsider-as-insider point of view that makes Ten Steps enjoyable. The book is full of survival tactics Gadsby gained from attacks heeded thus far, specifically the reconstruction and reframing of the patriarchal worldview she was born into and oppressed by. “I figured it might be helpful to reframe resilience as an active power-pose instead of a passive state of just getting by,” she writes, saying that she prefers to sit “very still and just have a think about things,” because only after acknowledging the truth of trauma can you put it into words. “And when there are no words, there is no sharing,” Gadsby says. “And when there is no sharing, you can’t find your way back to safety.”

For fans of Gadsby, her delivery on the page will delight just as it does on screen. She remains honest, with stories that draw laughter over situations that are always based in truth—harsh or otherwise. In her memoir, she shares graphs and notes from all parts of the Nanette process, spending more time meditating on how she spun them all together to create a show no one could stop talking about rather than those who had nothing nice to say.

At 400 plus-pages, Ten Steps reveals more about Gadsby than the typical comedian memoir, even though she’s not ready to share all her tricks. Still, with the book, Gadsby establishes she’s not going anywhere anytime soon. “I’ll keep the best secrets to myself because I’m not done quitting comedy just yet,” she writes.

For more of TIME’s culture coverage, subscribe to our entertainment newsletter, More to the Story, by clicking here .

The Troubled and Redeemed Life of Former Teen Idol Leif Garrett, Who's Now 61

According to journalist Lia Beck and Yahoo! Life, "In the 1970s, Leif Garrett came to fame as a teenage actor on shows including Three for the Road, Family, and The Odd Couple. From there, he launched a successful singing career—though it wasn't always his voice on those recordings—and was a fixture in Tiger Beat magazine and on the walls of his teen fans. But, in the years since Garrett was a teen idol, he has been through hard times, including drug addiction and legal problems. Now 60 years old, the actor has opened up about his struggles and his career in a memoir and in interviews."
1 DAY AGO
Fox News

Beverley Mitchell told Fox News Digital she has even more respect for the men and women in the military after appearing on FOX's new show, "Special Forces."
29 MINUTES AGO
TIME

Even the least controversial revisionist histories rarely gain a foothold without repetition—and in this case, stories new and old transcend partisan polemic when viewers get to see the faces behind them.
8 DAYS AGO
TIME

Mia Hansen-Løve’s One Fine Morning Is a Quiet, Sturdy Portrait of a Woman Who Has Lost Her Way

'Victory City,' the author's first book since he was attacked, will be published in early February
3 DAYS AGO