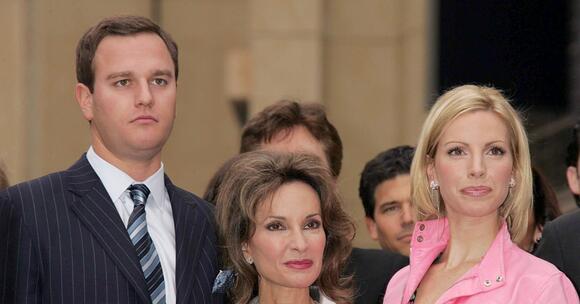 All My Children star Susan Lucci solidified her status as a soap opera icon in the ‘70s with her portrayal of Erica Krane on the daytime drama. In her personal life, the actress became a doting mom of two kids, Liza Huber and Andreas Huber, with her late husband, Helmut Huber.

Susan married Helmut in 1969, just before she began portraying the role on All My Children that she has since become best known for. Their daughter, Liza, was born in 1975 and their son, Andreas, was born in 1977. Starting a family was a dream come true for the Emmy winner, who was able to balance motherhood and her busy schedule.

“Since I was a girl, I wanted to be an actress, but I also wanted a family,” she told Closer in June 2016. “I feel so blessed that we’re all intact and happy. To me, it doesn’t get any better.”

The actress and the Austrian-born chef also became grandparents, with Susan giving fans a peek at her youngest grandson, Wolf, in a December 2017 Instagram post. She described his birth as “even more magical than the first snowfall.”

In a June 2019 interview with Closer, Susan said her style of parenting and being a grandmother was “a kissing, hugging, feeding, tickling kind.” At the time, she and her hubby were celebrating their 50th anniversary and planned to go to Austria to create more beautiful memories together.

Spending time with family has meant everything to Susan, who suffered from two heart blockages and underwent an emergency procedure to have a stent placed in 2018. In February 2019, she told People that she was “lucky to be alive.” The mom of two underwent a second heart procedure in 2022 and has since become an advocate for the Association’s Go Red for Women campaign.

“Helmut’s passing is a tremendous loss for all who knew and loved him. He was an extraordinary husband, father, grandfather and friend. The family kindly asks for privacy during this incredibly difficult time,” a rep for Susan told Closer.

Susan you are a amazing woman. Praying for you and your children in your time of grief.

so sorry for your loss Susan may your husband rip❤️🙏🙏🙏🙏

Are LeAnn Rimes and Eddie Cibrian Still Together? Inside Their Marriage Since Falling in Love on Set

Country singer LeAnn Rimes shot to fame as a teen with the song “Blue” and has remained in the spotlight ever since. In 2011, she married actor Eddie Cibrian after falling in love on the set of the film Northern Lights. Keep scrolling to find out if the pair are still together.
RELATIONSHIPS・8 DAYS AGO
Closer Weekly

Are Anderson Cooper and Benjamin Maisani Still Together? Inside Their Relationship

CNN personality Anderson Cooper has captivated audiences on the network for more than two decades. The broadcaster often shares details about his personal life and children on social media, as well as the status of his relationship with Benjamin Maisani. Keep scrolling to find out if they are still together.
CELEBRITIES・28 DAYS AGO
Closer Weekly

The hosts of Today are always sharing wisdom about parenting their adorable kids! Jenna Bush Hager, Craig Melvin and their costars are all so happy to come home after long days of work and spend time with their children. Jenna and pal Hoda Kotb enjoy sharing memories about their little...
FAMILY RELATIONSHIPS・16 DAYS AGO
Closer Weekly

The Hager family is always making memories full of smiles and laughter! Jenna Bush Hager and her husband, Henry Hager, love being parents to their three adorable kids: Margaret “Mila,” Poppy and Henry “Hal.” The Today host constantly shares funny and candid moments with her little ones on social media.
FAMILY RELATIONSHIPS・29 DAYS AGO

For Today host Jenna Bush Hager, there’s nothing more relaxing than taking a trip to the beach with her family. The television personality is a mom to three kids with her husband, Henry Hager: Margaret “Mila,” Poppy and Henry “Hal.” She is always documenting their family getaways with lovely beachside photos shared on social media.
MAINE STATE・28 DAYS AGO
Fatim Hemraj

When Karla Rodriguez vanished from her Las Vegas neighborhood in 1999, investigators called her a “victim waiting to happen.” Not only was she a vulnerable 7-year-old with a medical condition who spoke limited English, but Karla’s parents often left her unsupervised, to fend for herself.
LAS VEGAS, NV・3 DAYS AGO
Closer Weekly

Sean Penn and Ex Robin Wright’s 2 Kids Are on the Path to Stardom! Photos of Dylan and Hopper

Oscar winner Sean Penn’s two kids are well on their way to becoming superstars! The Milk actor shares daughter Dylan Penn and son Hopper Penn with his second ex-wife, Robin Wright. The siblings have been photographed with their parents for red carpet events over the years. Sean and Robin...
CELEBRITIES・27 DAYS AGO
Closer Weekly

Jenna Bush Hager and Husband Henry Hager Are So in Love! See Their Cutest Photos Together

Sparks flew the first time Jenna Bush Hager met her longtime love, Henry Hager! The Today host and her spouse were first introduced while he was working on her father George W. Bush’s 2004 presidential re-election campaign. After getting married in 2008, Jenna and her husband accomplished so many things together, which they documented in cute photos posted on social media.
CELEBRITIES・15 DAYS AGO

Proud auntie! Jenna Bush Hager is a doting mom to three children, Margaret “Mila,” Poppy and Henry “Hal,” whom she shares with her husband, Henry Hager. Her twin sister, Barbara Bush, became a mom in September 2021 with the arrival of her first child, Cora. She shares the tot with her husband, Craig Coyne. Get to know Barbara and Craig’s adorable daughter.
CELEBRITIES・11 DAYS AGO
Closer Weekly

From an early age, Barbara Walters was determined to make a mark in the media industry as a producer, writer and host. She created The View in 1997, one of the most successful daytime talk shows on network television. The longtime television host announced her retirement in May 2013 at the age of 83 and has only stepped out on rare occasions since then.
CELEBRITIES・16 DAYS AGO
Closer Weekly

Are Love It or List It’s Hilary Farr and David Visentin Married? See Where Their Relationship Stands

Jenna Bush Hager’s Eldest Daughter Mila Is Growing Up So Fast! See Photos Over the Years

Her heart is so full! Jenna Bush Hager and her husband, Henry Hager, became parents in April 2013 when they welcomed their eldest daughter, Margaret Laura “Mila” Hager. Since then, the youngster has grown to be the best big sister to younger siblings Poppy Louise and Henry Harold “Hal” Hager.
CELEBRITIES・10 DAYS AGO

She’s still winning! 40-day Jeopardy! champion Amy Schneider revealed on September 28 that she had secretly married her fiancée, Genevieve Davis, in a May ceremony. Get to know the quiz show legend’s new wife. What Is Genevieve Davis’ Job?. She has worked as a nanny and...
RELATIONSHIPS・1 DAY AGO
Closer Weekly

Best friends for life! Jenna Bush Hager is beyond grateful to have her fraternal twin sister, Barbara Bush, to share life’s greatest moments. The former first daughters have a tight-knit bond that began right when they were born on November 25, 1981. Photos of their sweet sisterly memories will instantly make you smile.
CELEBRITIES・14 DAYS AGO
Closer Weekly

Legendary actress and activist Jane Fonda revealed she’s been diagnosed with cancer and is already undergoing chemotherapy treatments. The 84-year-old silver screen icon shared the news in a Friday, September 2, Instagram message to her followers. “So, my dear friends, I have something personal I want to share. I’ve...
CANCER・27 DAYS AGO
musictimes.com

Coolio 'Real' Cause of Death: Paramedics Tried To Revive Rapper For 45 Minutes

Coolio was declared dead at the age of 59. According to his manager Juarez, who talked to TMZ, the famed rapper, whose actual name is Aris Leon Ivey Jr., was at a friend's house and went to the restroom. When Coolio did not come out of the restroom, his companion...
HIP HOP・23 HOURS AGO
Closer Weekly

Judy Garland Was ‘So Devastated’ When Lana Turner and Artie Shaw Eloped: ‘She Screamed’

In the late 1930s, jazz clarinetist Artie Shaw became one of America’s most popular big band leaders — and a much desired man. “People ask what these women saw in me,” the musician said. “It’s the music; it’s standing up there under the lights. A lot of women just flip.”
CELEBRITIES・5 DAYS AGO
Closer Weekly

What Happened to Dick Van Dyke? Details on the Hollywood Icon’s Life After Finding Fame

Since the early ‘50s, Dick Van Dyke knew that Hollywood was where he was destined to be. The legendary actor proved to be a man of many talents, singing, dancing and acting for more than 70 years. Keep scrolling for an update on where he is now. How Did...
CELEBRITIES・23 DAYS AGO
Closer Weekly

What Happened to Bob Barker? Inside ‘The Price Is Right’ Host’s Life Before, During and After Fame

For 35 years, viewers tuned in to The Price Is Right to catch beloved host Bob Barker as he interacted with fans. The esteemed game show personality retired from hosting the show in 2007 at the age of 83. Since then, longtime fans of the program have wondered where he is now. Keep scrolling to find out.
TV & VIDEOS・24 DAYS AGO
Closer Weekly

Today host Dylan Dreyer is a supermom! From her early mornings working hard on the NBC program to her mommy duties at home, the TV personality has proven to be an incredible parent to her three children, Calvin, Oliver and Russell. She and her husband, Brian Fichera, keep a great sense of humor when it comes to raising their boys.
FAMILY RELATIONSHIPS・20 DAYS AGO