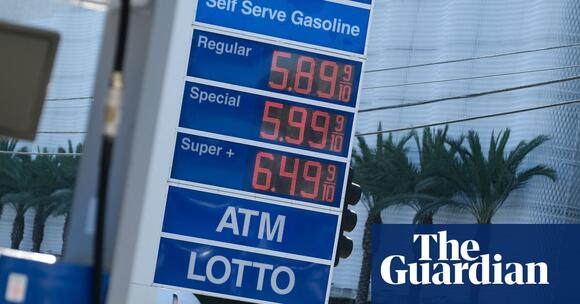 Joe Biden has announced plans to release up to 1m barrels of oil a day from the strategic reserve, in an attempt to contain high gasoline prices and curb inflation exacerbated by the war in Ukraine.

The president spoke from the White House to announce the move, which he said would represent the largest-ever draw ever on the country’s emergency supplies.

“Look, I know gas prices are painful. I get it. My plan is going to help ease that pain today and safeguard against tomorrow,” Biden said.

“I’m open to ideas and to strengthen the plan, but I will not be put off and put it on hold. I will do everything at my disposal to protect you from [Russian president Vladimir'] Putin’s price hike. It’s not time for politics. Americans can’t afford that right now.”

The administration is reportedly considering extending the release for as long as six months, with a potential limit of 180m barrels drawn from the current national reserve of 568m barrels.

The possible injection into the market of oil reserves, first reported by Bloomberg, comes as the Biden administration is wrestling with the political fallout of high petrol prices and rising inflation. According to the American Automobile Association, the US average now stands at $4.23 a gallon, up from $2.87 a year ago.

Extraordinary measures including gas rebates are being considered by California, the worst-hit state, where an average gallon of petrol now costs close to $6.

Any US release of national reserves is likely to be coordinated with other countries under the auspices of the International Energy Agency. Opec oil producers have so far resisted increasing output in the wake of Russia’s invasion of Ukraine, insisting there is no global shortage.

Biden confirmed that he decided on the measure in consultation with western partners, who have joined the US in imposing economic sanctions on Russia for the Ukraine invasion. Earlier this month, the US imposed a ban on Russian oil imports. Russia is the second-largest exporter of crude oil in the world.

“Thus far these actions are crippling Russia’s economy, isolating Putin from the world and helping Ukrainians fight for their country,” Biden said.

Biden’s plan called not just for immediately increasing supply, but also for increasing domestic production. In a statement, the White House said the oil and gas industry is sitting on more than 12m acres of non-producing federal land with 9,000 unused but already-approved permits for production. It said Biden would call on Congress to make oil companies pay fees on unused wells and land.

Biden also said he was including a directive “to strengthen our clean energy economy”.

“We need to embrace all the tools and technologies that can help us free us from our dependence on fossil fuels [and] move toward more homegrown clean energy technologies made by American companies and American workers,” he said.

He said he would use the Defense Production Act to secure America’s supply chains for the critical materials that go into batteries for electric vehicles and the storage of renewable energy, such as lithium, graphite and nickel.

The Congressional Progressive Caucus had recently called on Biden to do just that: use the Act to bolster the clean energy sector.

“We need to end our long-term reliance on China and other countries for inputs that will power the future,” Biden said.

High oil prices are causing a mounting headache for Biden ahead of November’s midterm elections. Inflation rose to a 40-year high in January, with prices rising by 7.5% on the previous year.

Analysts have tied high gasoline prices, caused largely by the conflict in Ukraine, and the inflation crisis to Biden’s slumping popularity and the Democratic party’s prospects in the midterms.

It is clear Biden wanted to act sooner than later, with an NBC poll this week reflecting an approval rating of only 40%, the lowest of his presidency to date.

Biden claimed that as well as new oil production, investing in green energy would also bring down energy prices. “Yes, building a base in America clean energy future will help safeguard our national security. Yes, it will help us tackle climate change. Yes, it’s going to help us ensure that Americans create millions of good paying jobs for generations to come. But the most important thing my plan will do right away is save your family money.”

He said: “We can take advantage of the next generation of electric vehicles. The typical driver will save about $80 a month from not having to pay gas at the pump. If your home is powered by safer, cheaper, cleaner electricity like solar, or heat pumps, you can save about $500 a month on average.

“Don’t take my word for it. The CEOs and 11 of America’s largest utility companies came to see me at the White House. They told me if we pass my plans before the Congress now typical families will see savings in utility bills immediately.”

The Strategic Petroleum Reserve, which is intended to protect the country’s access to oil in cases of natural disasters or national security issues, sits in salt dome caverns along the Gulf coasts of Texas and Louisiana.

The new round of releases from the oil stockpile would be the third in recent months: in November he ordered the release of 50m barrels, alongside other countries, and a further release of 30m barrels was made after the Ukraine war began.

all that's going to do is deplete our oil reserve supply...leaving us vulnerable and beholden to outside sources....which is exactly his intention

Gas prices were going up long before the Ukraine conflict. When you tell the oil industry they can't drill on federal lands and to forget an important pipeline along with letting them know in no uncertain terms he is against them and is pushing to move us from relying on their industry, where is their incentive to drill for more oil?

Ukraine planned to push for western fourth-generation fighter jets. Plus, why circadian-rhythm shaming needs to stop
FLORIDA STATE・1 DAY AGO
The Guardian

"There is no other way to talk to these fools," State Duma member and former military commander Andrey Gurulyov said.
2 DAYS AGO
C. Heslop

Inflation has reduced the value of social security benefits to recipients. But there will be further cuts in the long run. Experts say the increasing needs of seniors are burdening small benefit reserves. Americans are living longer because of lower lifestyle risks. Life expectancy was 47 years in 1900 and it was 76 in 2021.
2 DAYS AGO
Fox News

Migrants protested in the streets of Hell's Kitchen after the city tried to move them to a new center at the Red Hook cruise terminal in Brooklyn, reports say.
NEW YORK CITY, NY・2 DAYS AGO
TheDailyBeast

Former President Donald Trump appears to have lied in sworn court records, opening him up to severe sanctions by a New York judge who has already lost his patience and threatened to punish him before.Trump claimed he wasn’t the president of the Trump Organization during his four years at the White House, despite previously testifying that he was an “inactive president.” And he claimed that he didn’t have a financial stake in a partnership with the real estate company Vornado, even though he previously testified that he did.On Tuesday, the New York Attorney General’s Office asked Justice Arthur F. Engoron...
NEW YORK CITY, NY・1 DAY AGO
The Guardian

Recently, I stood on a raised court podium being cross-examined by a roomful of barristers. I was there as an “expert witness” to the case in hand – a group of young Black men from a small English city charged with conspiracy to possess a firearm – which mostly involved commenting on the extensive use of rap lyrics as evidence.
2 DAYS AGO
MsBirgith

A recent NBC poll revealed that 71% of Americans believe the country is headed in the wrong direction. This is a significant increase from previous polls and suggests a growing sense of unease among the American public.
2 DAYS AGO
RadarOnline

President Joe Biden and other Western leaders are worried Vladimir Putin will turn to “hybrid tactics” to sow chaos across the world rather than focus on “conventional warfare” in Ukraine, RadarOnline.com has learned.In a concerning development to come as Ukraine continues to fight back against Putin’s forces with the help of its Western allies and their weaponry and intelligence, Western powers suspect the Russian leader will soon change his tactics and start targeting those powers at home.Even more concerning are the newfound fears Putin will launch “a wave of asymmetric chaos” across the West in the form of “political interference,...
11 HOURS AGO
The Guardian

A nine-year-old girl who had a neighbor call the police on her as she worked to eradicate invasive insects from her home town has earned honors from one of the US’s most prestigious universities. The Yale School of Public Health earlier this month held a ceremony citing Bobbi Wilson’s...
CALDWELL, NJ・2 DAYS AGO
Newsweek

The video sparked discussions on social media about what kind of weapon could be responsible for the attack.
1 DAY AGO
RadarOnline

President Joe Biden awkwardly grabbed a reporter’s hand this week and squeezed under her umbrella after being asked about his recent decision to end two Covid-19 national emergencies, RadarOnline.com has learned.The somewhat bizarre incident took place on Tuesday afternoon as the 80-year-old president was departing the White House to visit New York City.While leaving the White House and approaching his helicopter, NBC News Chief White House Correspondent Kristen Welker questioned Biden about his Monday night decision to draw down two Covid-19 national emergencies by May 11.“What's behind your decision to end the Covid emergency?” she asked.But before answering Welker’s question,...
WASHINGTON STATE・21 HOURS AGO
Insider

Alina Habba, who was recently fined for filing a "frivolous" lawsuit, is no longer Trump's counsel in E. Jean Carroll's rape and defamation suit.
1 DAY AGO
The Guardian

The United States is tracking warlike announcements by Iran’s regime that it deployed two military ships to Brazil that are also headed for the Panama Canal, where Tehran declared it will establish a military presence. A U.S. State Department spokesperson told Fox News Digital on Tuesday, "We are aware...
FLORIDA STATE・1 DAY AGO
The Guardian

Has Donald Trump taken up meditation as his new year resolution? Is he mainlining sedatives? Did a demon snatch his soul and replace it with that of a reasonable person? I ask because the unthinkable has happened: Trump has responded to the idea of one of his former acolytes challenging his 2024 ambitions in a calm and measured manner, instead of with his usual insults.
FLORIDA STATE・1 DAY AGO