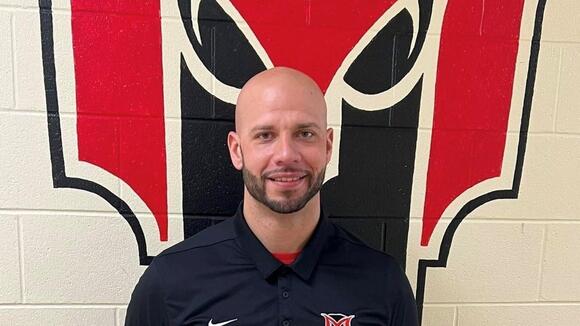 Jordan Stevens has officially been the Mount Healthy head football coach for nine days. With trying to finalize a coaching staff and getting his players ready for the season while also teaching at Mount Healthy, there's been no time for it to sink in that he's the face of a prominent high school football program.

That's just the way he likes it.

Mount Healthy is currently in its offseason workout program, with players either in the weight room or running on the Owls' track team. Stevens has been encouraged by the numbers in the weight room and brings a chip on his shoulder to his new role.

"Mount Healthy has always been smashed in between a lot of bigger programs. Sometimes the team feels forgotten," Stevens said. "I've always loved the underdog story."

Stevens said his team will take the field as scrappy underdogs.

"Defensively, we're gonna come get you," he said. "Whether we win, lose or draw, I want to make sure you know you played us.

Stevens knows a thing or two about the defensive side of the ball. He spent the previous five seasons as the defensive coordinator at Reading. Last season, Reading held its opponent to 14 points or less in six of its seven wins.

"We're gonna be a physical team and I'm gonna make sure we're flying around," Stevens said.

Stevens was an all-state defensive end and tight end for Gateway High School in Pennsylvania, totaling over 100 tackles and 11 sacks as a senior in 2005.

He was coached by Terry Smith, now the assistant head coach at Penn State, who served as his mentor to get into coaching after his playing career.

"I looked at him (Smith) as a father figure. I always really wanted that for kids, especially in an area where they don't have many strong male figures," Stevens said.

After a four-year playing career at Miami Ohio, Stevens began his coaching career as a grad assistant with the RedHawks in 2012. After that, he was a student teacher and was an assistant at Colerain Middle School before prep coaching stints at Turpin, Princeton, La Salle, Mount Healthy and Reading.

Along the way, he learned valuable lessons on how to run a program from guys like Pat McLaughlin and Arvie Crouch.

"The biggest thing I learned from Pat (McLaughlin) and Arvie (Crouch) is trust. Being in the coaching world, you have to find good, reliable guys you can put your trust in," Stevens said. "The other thing is staying loyal. Being loyal to guys that have always been good to you and just treating people the right way helps you out in the long run."

Stevens has big shoes to fill after Crouch left to take the Hamilton head-coaching job in February after 13 seasons. Crouch led Mount Healthy to seven conference championships during his tenure (five in the Southwest Ohio Conference, two in the Fort Ancient Valley Conference) and was the league coach of the year six times.

Stevens likes the challenge of the SWOC, despite an uncertain future with Ross and Edgewood set to leave for the Southwestern Buckeye League (SWBL) for the 2023-2024 school year.

The SWOC has had a different football champion in three consecutive seasons (Edgewood in 2021, Ross in 2020 and Harrison in 2019). Mount Healthy's last league title came in 2015.

"I think the SWOC is a hidden gem," Stevens said. "There's never a year where one team is expected to win it all. I enjoy the fact that every year you have a shot to put your mark on the league."