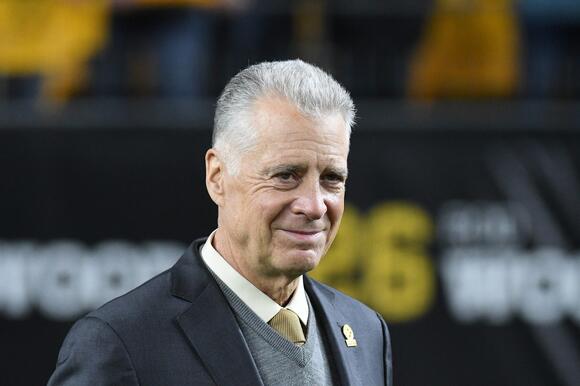 Brian Flores’ lawsuit against the NFL alleging racial discrimination didn’t play into the Steelers’ decision to hire him as a defensive assistant, says Art Rooney II.

Speaking Tuesday at the NFL Meetings, the Steelers’ owner outlined how his team came to hire Flores last month. Once it became clear Flores wasn’t going to land a head coaching job — he was reportedly a top candidate for the Texans — Mike Tomlin approached Rooney II about brining Flores aboard as an assistant.

Rooney II says his family role’s in creating the Rooney Rule wasn’t surfaced at any point during the conversations. “Mike came to me and said he thought that Brian was available and was interested in coming, and that he was interested in hiring him,” said Rooney II, via ESPN’s Brooke Pryor . “That's when we started the discussion. We didn't get into any discussions about the Rooney Rule or anything else.”

Flores filed his class-action suit against the NFL and three other teams alleging racial discrimination in hiring and firing practices Feb. 1. Rooney II said the Steelers won’t be involved in the legal process.

“I can't really comment on the lawsuit itself," he said. "That's something that we agree that he'll pursue his end of it, we'll pursue our end of it and that's sort of going to happen outside the building.”

The Dolphins fired Flores earlier this year, despite him leading Miami to its second consecutive winning season. Flores says Dolphins owner Stephen Ross offered him $100,000 per loss in 2019.

Earlier this week, Tomlin, one of just two Black head coaches in the league, told reporters he felt an obligation to stay close to Flores when he filed his lawsuit. The Steelers hired Flores as a senior defensive assistant and linebackers coach Feb. 19.

Given Flores’ track record, it’s fair to say the Steelers nabbed one of the most qualified assistants in the league. They’re just about bringing in the best people.

The Chiefs’ Week 4 Win Over the Buccaneers Was Long Overdue

Kansas City's win tells the story of a stellar performance and a team struggling to keep up.
KANSAS CITY, MO・21 MINUTES AGO
College Football HQ

Monday Night Football looks a lot different in the 2022 NFL season. This year, ESPN brought on former Fox Sports duo Joe Buck and Troy Aikman to call MNF games on the four-letter network in addition to other important broadcasts. ESPN is set to broadcast 18 games under the Monday Night Football ...
NFL・21 MINUTES AGO
93.7 The Fan

The Pittsburgh Steelers lost to the New York Jets by a final score of 24-20. The big story of the game today was Kenny Pickett taking the reigns from Mitch Trubisky at the halfway mark in the game.
PITTSBURGH, PA・16 HOURS AGO
93.7 The Fan

Pittsburgh Steelers QB Kenny Pickett produced plenty of highlights Sunday against the New York Jets, but his INT to Chase Claypool wasn’t one of them, despite what Greg Gumbel may have wanted.
PITTSBURGH, PA・10 MINUTES AGO

The Seattle Seahawks receiver summed up the emergency in one hellacious tweet.
SEATTLE, WA・20 MINUTES AGO
93.7 The Fan

Florio: Tomlin the only one who still wants Trubisky at quarterback

Ryan Shazier says there is player accountability with concussions

A unique perspective from former Steelers linebacker Ryan Shazier, hear what he had to say about what players need to do about concussions
PITTSBURGH, PA・19 HOURS AGO
93.7 The Fan

Najee Harris says run game on him, blames outside noise

What Steelers tailback Najee Harris said about his role in the inconsistent run game & the media role in their overall offensive struggles
PITTSBURGH, PA・2 DAYS AGO