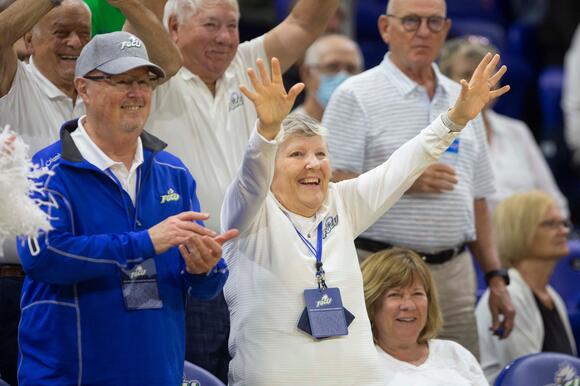 Something FGCU athletic director Ken Kavanagh said during Pat Chambers' introductory press conference on March 15 as the new men's basketball coach may have been missed.

It's something that has been missing the last four years compared to the previous five: Fans.

Those were missing everywhere in 2020-21 because of restrictions from the coronavirus pandemic.

And this year's average includes the Dunk City reunion game with Enfield and his 2021 Elite Eight USC team that drew 4,509. Otherwise, the biggest home crowd was the regular-season finale on Feb. 26 against Jacksonville with 2,584, and the average for the 18 dates that weren't the USC game was 1,927.

Kavanagh went out of his way to compliment outgoing head coach Michael Fly, who was fired March 5, for beginning to turn around the program, both on the floor (22-12 this season after going 34-48 his first three years) and off (over a 3.0 grade-point average).

Fly's tenure officially ended last Monday with an 84-68 loss to Coastal Carolina in The Basketball Classic. Fly and Kavanagh had agreed that Fly would continue as head coach if the team was selected for a postseason tournament.

"Michael Fly has been an invaluable member, teammate, and friend for so many of us over the last 11 years," Kavanagh said at Chambers' press conference. "The last four years he put in everything he could to continue to move this program forward, and in many instances, he did. ... We had never had a cumulative 3.0 grade-point average until the last four years.

"Nobody in my opinion bleeds more green and blue than Michael Fly."

That didn't carry over into the stands, at least enough for Kavanagh it appears, in what is the athletic program's biggest revenue sport.

When he zeroed in on Chambers, a former Penn State coach, and talked with others about who all he had in his hiring pool, Kavanagh was reinforced by what he was being told.

"The main piece that they then said was 'Go out and get a great coach who's going to basically energize your fan base and your student-athletes and who's going to fill those upper seats again,'" Kavanagh said. "That's exactly what we really want to do.

Eagles grabbed national attention by making Sweet 16, first 15th seed to do so

That has been the case since the birth of Dunk City in 2012-13 when the Eagles captivated the nation by becoming the first 15th seed to make the Sweet 16 with upsets of Georgetown and San Diego State. During that season, the Eagles had an improvement from 1,775 to 2,291, but the after-effects are what truly paid off both literally and physically.

The next five seasons, FGCU averaged 4,340, 4,229, 3,669, 3,979 and 3,656 with Joe Dooley as head coach. Dooley, a former Kansas assistant, won the men's basketball program's first ASUN regular-season title and took the Eagles to two NCAA Tournaments, two NITs and a CIT.

This season, Fly brought in two of the best players in school history in point guard Tavian Dunn-Martin and center Kevin Samuel, both transfers, but the Eagles didn't put it all together until the second half of the ASUN regular season. After completing the first half of the ASUN at 3-5, they won seven of their last eight, including wins at Liberty and at home against Jacksonville, the two teams ahead of them in the division standings.

It's time for a change, Pat Chambers may be the person for the job

But when the Eagles lost to eventual tournament champion Bellarmine in the ASUN tournament quarterfinals, Kavanagh thought it was time for a change. And he sees Chambers as someone who's not just going to improve the program in terms of wins and losses. 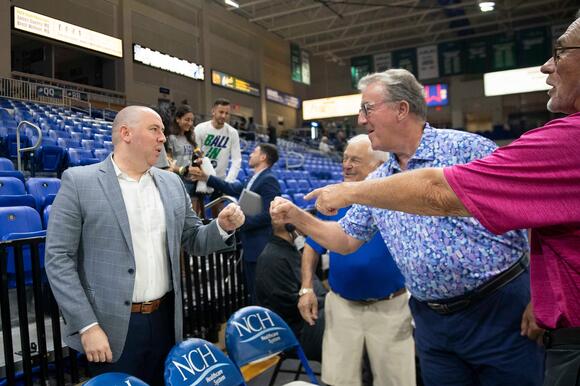 "I think he's going to be a gentleman that's going to get into this community and engage people in a manner that we obviously need to do," Kavanagh said. "It's really important for all of the great donors that we have to feel excited to stay and to build that base."

Chambers resigned at Penn State just prior to the 2020-21 season after former player Rasir Bolton posted on social media in the summer of 2020, a year after he left, that the reason he had left the program was because Chambers used the word "noose" in a private conversation with him, and that he did not like how Chambers and the school administration responded to the situation, which occurred in January 2019.

Following an ESPN story on the Bolton situation, Penn State launched an investigation and later announced Chambers' resignation on Oct. 21, 2020 after the school said new allegations of inappropriate behavior had been discovered, without detailing them. Chambers was gone after nine seasons and a 148-150 record. He was an assistant at La Salle this season.

Current players had come out in support of Chambers. Izaiah Brockington, who transferred to Iowa State after the 2020-21 season, spoke on a podcast last week that he still supported Chambers and would not have transferred if he was still the coach.

Only four players of 11 with eligibility remaining from that team still were there for this season under new coach Micah Shrewsberry.

Prior to his resignation, Chambers had been building the program, one of the tougher jobs in the Big Ten and at a football school on top of that. The Nittany Lions won the NIT in 2018 and were ranked in the top 10 at one point during the 2019-20 season, but the pandemic canceled the NCAA Tournament that year. 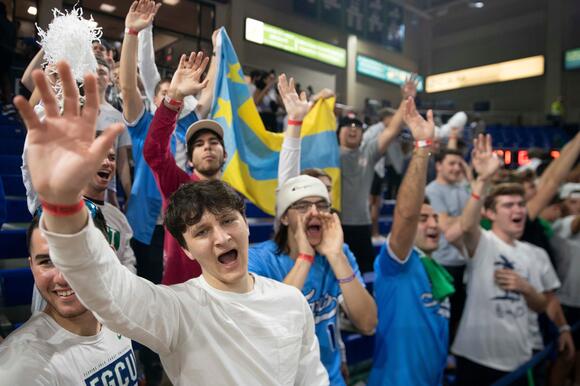 "We were top 50 (in the country) in attendance, really hard to do when most people are two to three hours away, especially during the week," Chambers said. "We hadn't had a sellout in 10 years. We had a sellout in 2020 against Minnesota."

How to get more fans into Alico Arena is simple.

"We have to develop deep relationships," Chambers said.

Fly's first team was 14-18, although it was 9-7 in the conference and did so without Zach Johnson, a likely conference preseason player of the year who announced during the offseason he was going to be a graduate transfer at the University of Miami. The next season the Eagles were beset by injuries and slipped to 10-22, equaling the second-fewest victories in the Division I era. 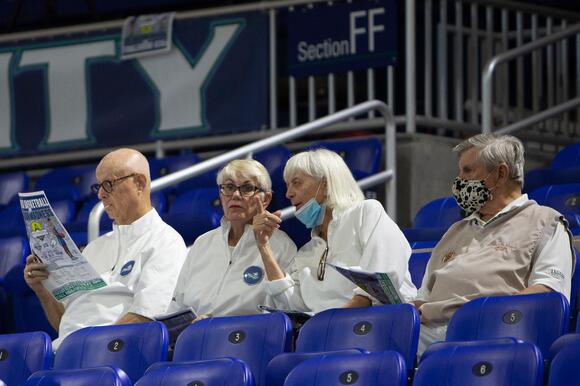 In 2019-20, during the height of the pandemic, the Eagles lost two weeks twice due to pauses because of positive tests. FGCU only played 18 games overall and half of its conference schedule, finishing 10-8.

Yet Kavanagh gave Fly, who was entering the final year of his contract, a two-year extension, although without a buyout.

Fly brought in five players, four of them with one year of eligibility, from the transfer portal to stock the roster. The Eagles started out 10-3, but an overtime loss at a bad Canisius team playing without its best player started a skid of five losses in seven games before FGCU recovered to finish strongly.

Fly had tried to go back to a style of the Dunk City days, something Dooley didn't totally embrace. Chambers isn't going there, at least not to that degree.

"I'm not going to say Andy Enfield's Dunk City, but some version of that, my version where fans are like 'This is awesome. We're getting on the floor. We're scoring the ball. We're making 3s. This is exciting stuff.'"

Exciting enough that more of them will come.

Greg Hardwig is a sports reporter for the Naples Daily News and The News-Press. Follow him on Instagram, Facebook and Twitter: @NDN_Ghardwig, email him at ghardwig@naplesnews.com. Support local journalism with this special subscription offer at https://cm.naplesnews.com/specialoffer/