Get the latest breaking news, sports, entertainment and obituaries in Augusta, GA from The Augusta Chronicle. 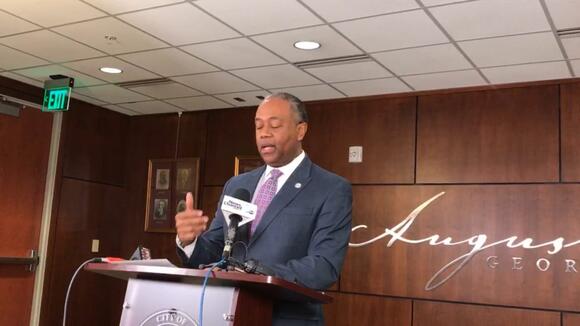 Augusta Mayor Hardie Davis Jr. is in Doha, Qatar this week to participate in Smart City Expo Doha, a spokesman from this office confirmed Tuesday.

Davis was one of more than 70 speakers slated to speak at the two-day conference in the Persian Gulf capital city, which is seven hours ahead of Augusta.

"May our office allow us to focus around these key issues: Health and wellness, finance, architecture, culture and design, because they too make smart cities, as we look forward to making investments across our communities,” he said in brief remarks posted on social media. .

It was unclear Monday if Davis was flying overseas or sending remarks via video, based on the news release, and his spokesperson did not respond to a request for clarification. His colleague in the U.S. Conference of Mayors, Miami Mayor Francis X. Suarez, sent remarks on video.

What became clear Tuesday is that Davis will miss and not preside over the rescheduled Augusta Commission meeting Wednesday, when he is scheduled to speak about "smart solutions for urban sustainability," according to the conference agenda.

Augusta commissioners said they learned about Davis' travel from a reporter and didn't expect him to leave the country so close to the Masters Tournament. The Wednesday meeting is rescheduled to avoid having one during Masters Week.

"Here, transparency again fails," Commissioner Catherine Smith McKnight said. "We were going to get to the meeting and find out he isn't going to be there. He needs to be worried about what's going on here and not there."

Another commissioner erupted in laughter. "I have no idea," Commissioner Dennis Williams said Monday. "I hadn't heard about it (until) you mentioned it."

In the mayor's absence, the duty of conducting the commission meeting falls on the mayor pro tem. Augusta Mayor Pro Tem Bobby Williams could not be reached for comment Monday or Tuesday.

If he's out, Davis will miss an update on poor conditions at Ervin Towers, a public housing high-rise, for which he's listed as a presenter. He will also miss the agenda item sought by two commissioners, McKnight and John Clarke, to conduct an in-depth audit of city departments.

McKnight said the state ethics commission finding probable cause last week in two ethics complaints against Davis was another incentive for the request, which she and Clarke have made before.

Davis came under fire last year when the news media learned of his previous trip to Qatar. He had not informed the majority of the Augusta Commission he was leaving the country. The visit, with a delegation of U.S. mayors, wasn't paid for by the local government, Davis said at the time.

The Doha expo was organized by a branch of the Qatar government. The oil-rich nation is known as the world's richest country, and ramped up its U.S. lobbying efforts after the 2017 start of a Persian Gulf boycott of Qatar initially supported by former president Trump.

Get the latest breaking news, sports, entertainment and obituaries in Augusta, GA from The Augusta Chronicle.