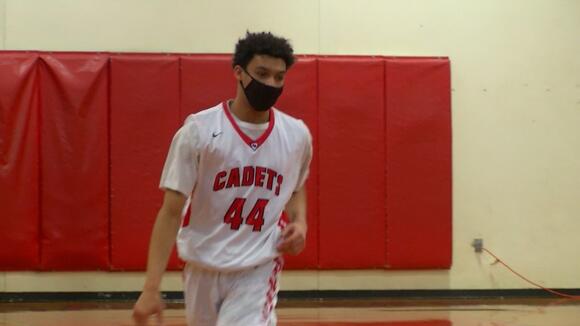 Marcus is the younger brother of Andre Jackson, a sophomore at UConn and graduate of Albany Academy. UAlbany head coach Dwayne Killings recruited Andre while Killings was still at Marquette, meeting Marcus along the way.

Marcus believes the culture Killings has created will fit him perfectly. “I think what coach Killings and coach Tibbs and the rest of the staff have envisioned as a whole mentality aspect, I really agree with,” said Jackson. “I think it’s a huge part of success in basketball. That was really attractive off the jump and then just them really valuing the little things I do in my game.”

Jackson’s former coach at Albany Academy, Brian Fruscio, also loves the fit. “Marcus is really a special player and one of, in my 30 years of coaching, he’s my heart and soul,” said Fruscio. “Now he’s coming back to play for coach Killings, who’s really established a really nice culture. It’s something that Marcus feels he can be a part off. So it’s really exciting that we can watch him play.”

In the Class A girl's soccer ranks Ravena took a trip to Schenectady to take on the 15th ranked Mohonasen Warriors.
SCHENECTADY, NY・18 HOURS AGO
NEWS10 ABC

Shenendehowa football is having Deja vu, but they're hoping for a different ending. Last year, the Plainsmen beat Shaker in the Class AA semifinal, but lost to CBA in the Super Bowl. Last week, they beat Shaker, and guess who's up next? CBA in our 1st & 10 Game of the Week.
CLIFTON PARK, NY・18 HOURS AGO
NEWS10 ABC

ALBANY, NY (NEWS10) — The last time Christian Brothers Academy and Shenendehowa met, the Brothers took down the Plainsmen 28 to 14 to win the Class AA title. This Friday night, the two unbeaten powerhouses run it back in our 1st & 10 Game of the Week, with a lot on the line.
CLIFTON PARK, NY・2 DAYS AGO
NEWS10 ABC

What NY team is the most popular in Albany?

From the Yankees to the Giants, have you ever wondered which NY franchise is the most popular in Albany? NY sports are one of a kind and highlight the pride fans and players have for the state and city of New York.
ALBANY, NY・1 DAY AGO
NEWS10 ABC

AVERILL PARK, N.Y. (NEWS10) — It’s a story NEWS10 ABC first told you about: an Averill Park High School student representing the Class of 2022 got a perfect score of 5 on his AP art exam this past spring. Not only did Liam Rounds earn a perfect score, but he also scored the maximum amount […]
AVERILL PARK, NY・10 HOURS AGO
NEWS10 ABC

It's nearly hockey season in Glens Falls. The Adirondack Thunder start playing their 2022-23 season on Saturday, Oct. 29, with a home game against the Worcester Railers.
GLENS FALLS, NY・2 DAYS AGO
NEWS10 ABC

5 things to know this Friday, October 7

Today's five things to know include a person killed after being hit by a car in Albany, a state corrections officer from Schenectady accused of DWI, and a Corinth man winning $1 million on a Mega Millions ticket.
ALBANY, NY・10 HOURS AGO
NEWS10 ABC

The Hudson City School District has decided to cancel the remainder of the varsity football season due to a lack of eligible players. The district made this decision on October 5.
HUDSON, NY・5 HOURS AGO
NEWS10 ABC

The University at Albany is hosting the second annual Race for Equity 5k. The community event is designed to celebrate U.S civil rights accomplishments, recognize enduring injustices and galvanize momentum for change.
ALBANY, NY・1 DAY AGO

Albany Comic Con is back for year 16 of displaying premiere comic books and collectibles. The area's best dealers and professionals come together to make the show a full-blown convention.
ALBANY, NY・1 HOUR AGO
NEWS10 ABC

Three Albany Police officers paid a visit to the Capital Region BOCES Career & Technical Education Center in Albany on October 6, sharing their knowledge and expertise with students in the Criminal Justice program.
ALBANY, NY・11 HOURS AGO

Things to do in the Capital Region this weekend: Oct. 7-9

The weekend is almost here! From festivals to wrestling to quilting, there are quite a few things happening from October 7 to 9.
ALBANY, NY・2 HOURS AGO
NEWS10 ABC

Progress being made on Upstate Ice Plex

25 years ago, a retired Gloversville, N.Y., art teacher, Mary Cleland, sculpted a vision for a place people in Fulton County could go to to enjoy winter activities. Now that dream is quickly becoming a reality.
FULTON COUNTY, NY・18 HOURS AGO
NEWS10 ABC

Comedian Jeff Dunham is set to perform at the MVP Arena on February 8, 2023. This Albany stop is part of his "Still Not Canceled Tour."
ALBANY, NY・2 DAYS AGO