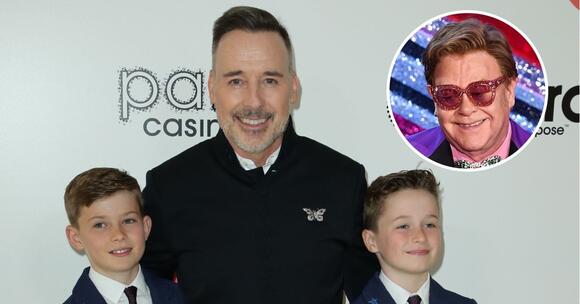 Zachary, 11, and Elijah, 9, wore matching navy blue suits as they posed for photos with David, 59, and their family friend Lady Gaga. The boys looked like they were having the time of their lives at the star-studded affair. The Elton John AIDS Foundation hosted the event for the 30th time, making it known as the most iconic Oscars viewing party for Hollywood’s biggest stars.

Elton, 75, had initially planned to attend the party, however, the date was pushed back a month due to the ongoing COVID-19 pandemic. Instead, he joined the festivities via satellite while performing on his tour in Nebraska. This marks the first year the “Tiny Dancer” singer did not attend the event in person. Due to his absence, Brandi Carlile, Lady Gaga, Billy Porter and Eric McCormack stepped in to cohost the event.

“It breaks my heart but I can’t be there, because it’s an event that means so much to us,” Elton said during a March 2022 interview on Good Morning America. Brandi, who joined her dear friend for the interview, quipped, “We’re going to try to make up for Elton not being there by me wearing something outrageous. You have to rise to the occasion because he’s going to see the pictures and let you know if you don’t.”

Elton is an Oscar winner himself, winning for Best Original song in 1994 with “Can You Feel the Love Tonight” and again in 2019 with “(I’m Gonna) Love Me Again.” On top of being one of the most successful singers in the world, the Grammy winner always makes time to make memories with his two kids.

“That was the greatest decision I’ve made — well — we’ve made, in the last six years, is to have those boys,” the legendary performer said on Today in February 2016. “They’re our primary concern. They’re the things that come first and foremost.”

Adam Levine and wife Behati Prinsloo are going to become a family of five, as the model confirmed she is pregnant with baby No. 3. She debuted her bare baby bump in a Thursday September 15, Instagram selfie where she wrote in the caption, “Recent.”. Behati, 34, first sparked...
CELEBRITIES・17 DAYS AGO
Closer Weekly

Pregnant! Blake Lively debuted her baby bump, revealing she is expecting baby No. 4 with husband Ryan Reynolds on the red carpet at the Forbes Power Women’s Summit on Thursday, September 15. Blake, 35, cradled her baby bump while wearing a sparkling long-sleeved mini dress while she posed for...
CELEBRITIES・18 DAYS AGO
Closer Weekly

After he was cast as doting uncle Joey Gladstone in the family sitcom Full House, Dave Coulier decided to start a family of his own! The comedian is a dad to one child, Luc Coulier, whom he welcomed during his marriage to his first wife, Jayne Modean. Keep scrolling to meet his son.
FAMILY RELATIONSHIPS・24 DAYS AGO
Closer Weekly

Longtime fans of Brendan Fraser were delighted to see him make his big Hollywood comeback in 2022. But before then, the Encino Man actor took a step back from the spotlight, making only a few rare public appearances over the years. Brendan found fame in the early ‘90s as he...
CELEBRITIES・26 DAYS AGO

Hollywood is home to so many iconic stars whose resumes are full of showstopping roles and tremendous accolades. Several celebrities age 90 and above like Tony Bennett, Mel Brooks, Norman Lear and Bob Barker have been honored for their contributions to the world of entertainment over the past few decades. They’ve made rare red carpet appearances through the years and continued to prove that their talent knows no limits.
CELEBRITIES・3 DAYS AGO
Closer Weekly

From an early age, Barbara Walters was determined to make a mark in the media industry as a producer, writer and host. She created The View in 1997, one of the most successful daytime talk shows on network television. The longtime television host announced her retirement in May 2013 at the age of 83 and has only stepped out on rare occasions since then.
CELEBRITIES・20 DAYS AGO
Closer Weekly

Are LeAnn Rimes and Eddie Cibrian Still Together? Inside Their Marriage Since Falling in Love on Set

Country singer LeAnn Rimes shot to fame as a teen with the song “Blue” and has remained in the spotlight ever since. In 2011, she married actor Eddie Cibrian after falling in love on the set of the film Northern Lights. Keep scrolling to find out if the pair are still together.
RELATIONSHIPS・12 DAYS AGO
Closer Weekly

Are Love It or List It’s Hilary Farr and David Visentin Married? See Where Their Relationship Stands

She’s still winning! 40-day Jeopardy! champion Amy Schneider revealed on September 28 that she had secretly married her fiancée, Genevieve Davis, in a May ceremony. Get to know the quiz show legend’s new wife. What Is Genevieve Davis’ Job?. She has worked as a nanny and...
RELATIONSHIPS・5 DAYS AGO
Closer Weekly

Savannah Guthrie’s Husband Mike Feldman Is Her Prince Charming! Get to Know Her Spouse

What Happened to Dick Van Dyke? Details on the Hollywood Icon’s Life After Finding Fame

Since the early ‘50s, Dick Van Dyke knew that Hollywood was where he was destined to be. The legendary actor proved to be a man of many talents, singing, dancing and acting for more than 70 years. Keep scrolling for an update on where he is now. How Did...
CELEBRITIES・26 DAYS AGO
Closer Weekly

What Happened to Adam Rich? Find Out Where Nicholas Bradford From ‘Eight Is Enough’ Is Today

From 1977 to 1981, ABC viewers tuned in to Eight Is Enough to watch the Bradford family navigate life with eight kids after losing their matriarch, Joan Wells Bradford. Adam Rich portrayed Nicholas Bradford, the youngest child of the bunch, and became a star. Keep scrolling to find out what happened to the former child actor after the sitcom ended and where he is today.
TV & VIDEOS・5 DAYS AGO

Goldie Hawn and Kurt Russell Have Built a Massive Fortune Together! See Their Net Worths

Power couple Goldie Hawn and Kurt Russell have built an incredible empire together! The longtime lovebirds both have impressive net worths due to their many years in Hollywood. Keep scrolling to see how much money they make. What Is Goldie Hawn’s Net Worth?. Goldie has an estimated net worth...
CELEBRITIES・26 DAYS AGO
Closer Weekly

Judy Garland Was ‘So Devastated’ When Lana Turner and Artie Shaw Eloped: ‘She Screamed’

In the late 1930s, jazz clarinetist Artie Shaw became one of America’s most popular big band leaders — and a much desired man. “People ask what these women saw in me,” the musician said. “It’s the music; it’s standing up there under the lights. A lot of women just flip.”
CELEBRITIES・8 DAYS AGO
Closer Weekly

The hosts of Today are always sharing wisdom about parenting their adorable kids! Jenna Bush Hager, Craig Melvin and their costars are all so happy to come home after long days of work and spend time with their children. Jenna and pal Hoda Kotb enjoy sharing memories about their little...
FAMILY RELATIONSHIPS・20 DAYS AGO
Closer Weekly

Lorne Greene: How the Actor’s Compassion and Love Made ‘Bonanza’ Star a Beloved TV Dad

In its 14 years on the air, Bonanza became an American institution — largely due to some early input from its star, Lorne Greene. “Every show began with one member of the family with a gun, pointing it at somebody, saying, ‘What are you doing on the Ponderosa?’” remembered Lorne, who debuted as patriarch Ben Cartwright in 1959. “Finally, I said to the producer, ‘If a stranger comes to the Ponderosa, why do we have to point a gun at him? Let’s be human beings, let’s not be antagonists.’” The producer listened, and the show evolved. Instead of just another western, Lorne said, “it became a story … about a four-letter word: love.”
CELEBRITIES・23 DAYS AGO
Closer Weekly

Take a Peek Into the Homes of Your Favorite Food Network Stars: Alex Guarnaschelli, Molly Yeh and More

The stars of Food Network are always cooking up a storm in their homes! It’s no surprise that the channel’s chefs like Alex Guarnaschelli, Giada De Laurentiis, Molly Yeh and more live in gorgeous houses with amazing kitchens. Photos of their lovely abodes will leave you speechless. Alex...
TV & VIDEOS・27 DAYS AGO
Closer Weekly

A somber day. Princess Charlotte was seen wiping away her tears at Queen Elizabeth II’s funeral on Monday, September 19. Princess Kate (née Middleton) embraced her daughter as she cried at her great-grandmother’s service alongside her son Prince George. Prince William’s daughter honored the late queen through...
CELEBRITIES・14 DAYS AGO
Closer Weekly

Steve Martin’s Net Worth Is Staggering! See How Much Money the ‘Only Murders in the Building’ Actor Makes

Only Murders in the Building actor Steve Martin has dominated all areas of the entertainment space for more than 50 years. His acting chops, singing voice and comedic skills have led him to become one of the most well-respected actors in Hollywood with a whopping net worth to show for it. Keep scrolling to see how much money he makes.
CELEBRITIES・24 DAYS AGO