These states are proposing sending residents money to combat rising inflation, from tax rebates to stimulus checks up to $850 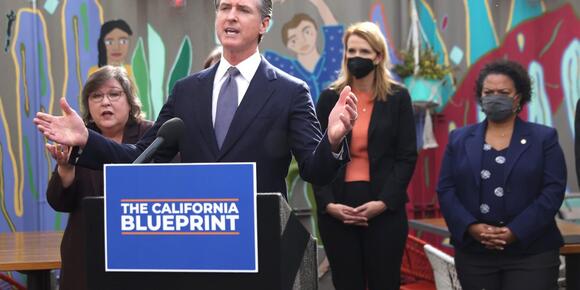 Never miss a story: Follow your favorite topics and authors to get a personalized email with the journalism that matters most to you.

States are responding to decades-high inflation with a variety of measures to help cash-strapped residents, including sending fuel debit cards and implementing tax credits.

Inflation has risen 8% over the past year, straining household budgets across the country. Gas prices are especially onerous for drivers, averaging over $4.20 a gallon.

With many states still having surplus funds from COVID-19 federal aid packages to spend, at least a dozen, led by both Democrats and Republicans governors, have announced measures for mitigating some of the effects of inflation on their residents. Many of the measures are included in state budget proposals, which means it will be a few months before residents benefit from them.

Here's a breakdown of some of the state stimulus efforts so far.

Georgia Governor Brian Kemp, a Republican, announced Wednesday the state will provide a one-time tax credit for both 2020 and 2021. The Georgia Department of Revenue will automatically credit the refunds once taxpayers file their 2021 returns, amounting to $250 for single filers, $375 for head of household, and $500 for married filing jointly.

In his state-of-the-state address in January, Hawaii Governor David Ige, a Democrat, proposed sending $100 to each taxpayer and their dependent(s). Ige's press secretary did not immediately respond to Fortune's inquiry on where this rebate stands.

In February, Idaho Governor Brad Little, a Republican, signed off on a measure to send tax rebates amounting to either $75 per taxpayer and each dependent, or 12% of their 2020 taxes, whichever is greater. Taxpayers need to residents of the state for 2020 and 2021, and have filed tax returns for both years, in order to qualify.

Indiana residents will receive $125 each after they file their 2021 tax returns. The state legislature recently expanded the rebate so those who typically earn too little to file a tax return also qualify for the payments.

Democratic Governor Janet Mills proposed that all Maine residents be sent $850 in direct payments. The measure — one of the most generous among the states so far — has bipartisan support but still needs to be approved by the state legislature, according to local news sources. The state said the payments could go out starting in June 2022.

Governor Michelle Lujan Grisham, a Democrat, signed a bill earlier this month that includes a refundable child tax credit worth up to $175 per child, as well as a one-time, refundable income tax rebate worth $250 for qualifying single filers and $500 for married couples filing jointly.

Connecticut, Georgia, and Maryland are the three states that have responded to price increases at the pump by temporarily cutting state gasoline taxes. The measures vary in each state. Other states considering a similar gas tax holiday include California, New Jersey, New York, and Ohio. State gas tax and fees average around $0.39, according to the American Petroleum Institute.

There has also been calls in Congress to suspend the federal gas tax. That said, there is bipartisan opposition to the move, which some lawmakers argue wouldn't amount to much help for people.

Though not a direct response to rising inflation, several states, from Colorado to Georgia to South Carolina, have also proposed cutting state income tax rates in response to state budget surpluses.

Wouldn’t it be cheaper on the taxpayers to just get rid of the state’s gas tax??? Oh ya they don’t want to help the truckers save money!!!!!!

Well if he plans on mailing the money, a lot of people won’t get it, organized crime workers will get it before it hits the mail box.

With our southern border being flooded with Illegals crossing daily, thanks Biden for squeezing the life out our country financially.

Denmark’s Queen just stripped 4 of her grandchildren of their royal titles so that they can ‘shape their own existence.’ The kids and their parents aren’t happy

Only four of eight grandchildren will retain their royal titles. Royalty in Europe is declining ever further as princes and princesses across the continent are losing their official statuses. In a bid to protect the youngest royals from the pressures of public life, the Queen of Denmark has stripped four...
EUROPE・1 DAY AGO
Fortune

Bill Gates, pictured in July 2022, told Bloomberg’s “Zero” podcast that "not many people are prepared to be worse off because of climate requirements." Climate change will never be solved by asking or expecting others to live greener lifestyles, according to Bill Gates. Speaking on Thursday’s episode...
ECONOMY・14 HOURS AGO
Fortune

Virgin Atlantic is relaxing its uniform rules to allow staff to wear clothing at work that expresses their gender identity. Forced gender conformity has no place in the skies, billionaire Richard Branson’s airline Virgin Atlantic is telling its staff. The airline has changed its uniform policy to offer all...
INDUSTRY・2 DAYS AGO
The Motley Fool

SNAP Payments to Increase 12.5% in October. Max Benefit for Family of Four Now $939

Food benefits are increasing to match the higher cost of living. The 2023 SNAP food benefit increase takes effect on Oct. 1, 2022. The maximum SNAP benefit for a family of four will increase by $104 in most of the country. Double up schemes and cash back apps may help...
HEALTH・1 DAY AGO

Since this summer, the news and the California Governor have talked about relief money. But the specific dates of these payments have been unclear. Now, officials have provided a timeline for the long-awaited state help.
CALIFORNIA STATE・2 DAYS AGO
Insider

Track the path of Hurricane Ian, with live updates on watches, warnings, and any possible evacuation notices or damage reports.
FLORIDA STATE・42 MINUTES AGO
Benzinga

Donald Trump refused to delay deposition in a class-action fraud lawsuit related to video phones even as opposing lawyers sought a deferral due to a category 4 hurricane that hit Florida’s west coast on Wednesday. What Happened: While Trump’s lawyers opposed delaying the deposition, the lawyers for the investors...
FLORIDA STATE・1 DAY AGO
Fortune

Members of the Workers Assembly Against Racism gathered across from Jeff Bezos-owned Whole Foods Market in Union Square South for a nation-wide solidarity event with the unionizing Amazon workers in Bessemer, Alabama. Amazon is trying to slim down the number of people coming into its offices by encouraging its call...
BESSEMER, AL・1 DAY AGO

Americans’ net worth by age, plus 5 tips for boosting yours

Increasing your net worth starts with eliminating any debts that could be dragging you down. Photo Illustration by Fortune: Original Photograph by Getty Images. While it might feel like your paycheck allows you to make the occasional splurge, there’s more to your financial life than the present moment. It’s important to check in on your finances so that you can adjust your spending, saving, and investing habits to make sure you’re on track for a more stable future. One way to better understand your financial health: Learn about your net worth and what you can do now to help it grow.
ECONOMY・2 DAYS AGO
Fortune

Employees are afraid they’ll be fired first in layoffs if they’re working remotely. They could be right

Nearly 80% of American workers fear remote workers will be laid off first if a recession leads to layoffs. For months, bosses have all but gone door to door preaching the good word of returning to the office. It was the only way, they said, to ease inflation and for workers to protect themselves from looming layoffs.
BUSINESS・2 DAYS AGO
Fortune

The cost of divorce is ‘like the death of a thousand cuts.’ Inflation is only making it worse 

The average cost of divorce is $15,000. The financial and emotional toll, from people who went through it. For nearly a year after Jerry Proctor and his ex-wife separated, the once-couple continued to live together in the house they rented throughout their marriage. The arrangement made an already fraught time...
RELATIONSHIP ADVICE・1 DAY AGO
Fortune

In a petition filed at King County Superior Court in Washington State, the couple asked the court to dissolve the marriage, noting “spousal support is not needed,” Bloomberg reported. Scott and Jewett reportedly have a mutually agreed-upon contract that details how personal properties will be split. It’s unclear...
WASHINGTON STATE・1 DAY AGO

The potential to offshore white-collar work is not only real, but could be a “seismic” shock to knowledge workers, experts say. Workers who have been rejoicing about their ability to log on from anywhere might do well to consider the inverse situation: a worker somewhere else can probably do their job—for cheaper.
CAREER DEVELOPMENT & ADVICE・1 DAY AGO
Fortune

Representative of the Main Directorate of Intelligence of Defense Ministry of Ukraine Vadym Skibitsky says Ukraine’s military intelligence has put the threat of nuclear weapons from Russia at “very high.”. Fears of nuclear war are mounting across the West as Russia mobilizes hundreds of thousands of troops and...
POLITICS・13 HOURS AGO
Fortune

The rate at which your interest compounds will depend on the financial institution you bank with. Not all savings accounts are built equally. While some simply serve as a place to store your funds separately from your checking, others go the extra mile by offering you extra interest on the money you save. This higher rate is key to building a nice cushion that can support you in the event of an emergency or help you meet a financial goal faster.
PERSONAL FINANCE・2 DAYS AGO
Fortune

If you paid off your federal student loans during the COVID-19 pandemic, you may still be eligible for Biden’s forgiveness. Here’s how

Borrowers who regret paying off their student loans during the COVID-19 pandemic may be able to get a refund and benefit from the one-time forgiveness. Borrowers who paid off the remaining balance of their federal student loans during the coronavirus pandemic may lament narrowly missing out on President Joe Biden’s recently-announced widespread forgiveness effort.
EDUCATION・2 DAYS AGO

Billionaire MacKenzie Scott just filed for divorce. Here’s what we know about how it affects her fortune

The Pandemic Housing Boom saw U.S. home prices soar 42%. Heading forward, some of those gains will get erased. On Tuesday, the going home price correction finally showed up in the Case-Shiller U.S. National Home Price Index, as the reading for July came in 0.24% below its June reading. That marks the first month-over-month decline in home prices since 2012.
REAL ESTATE・2 DAYS AGO
Fortune

Homeowners insurance isn’t a state mandate in the same way that auto insurance is, but it’s often required by a lender if you have a mortgage. Homeownership might be the American Dream, but so much can go wrong when you own a home. A tree falls through the...
REAL ESTATE・2 DAYS AGO