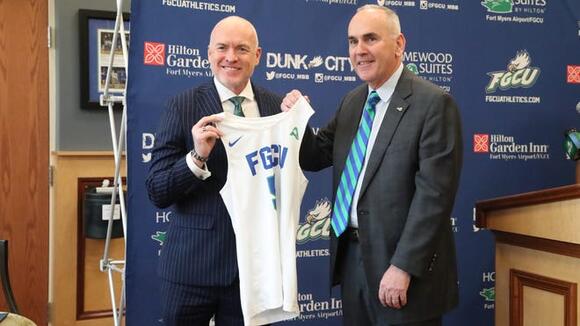 The current Iowa State player was a guest on Zach Schumaker's podcast, and revealed he was disappointed that Chambers had to resign, and that he still talks to the now-new FGCU coach to this day.

"It hurt, it definitely hurt," Brockington, who is now at Iowa State, of Chambers' resignation just prior to the 2020-21 season. "... For him to be gone like that, so close to the season, and for people to question his character and the type of person he was, it was really sad to see that everything ended like that, and people were viewing him like that.

"He was one of the nicest, realest guys that I had been around. He was a coach that I hadn't really had before, in terms of, he'd bring players into his office and just want to talk about things that weren't basketball."

Chambers resigned at Penn State just prior to the 2020-21 season after former player Rasir Bolton posted on social media in the summer of 2020, a year after he left, that the reason he had left the program was because Chambers used the word "noose" in a private conversation with him, and that he did not like how Chambers and the school administration responded to the situation, which occurred in January 2019.

According to a subsequent ESPN story, Chambers, who had been suspended a day earlier for shoving one of his players during a timeout, was talking to Bolton, then a freshman and who had been struggling.

Bolton said that Chambers told him: “I want to be a stress reliever for you. You can talk to me about anything. I need to get some of this pressure off you. I want to loosen the noose that’s around your neck.”

After the story came out, Chambers issued an apology saying in part he "realized the pain and ignorance my words caused Rasir Bolton and his family and I apologize to Rasir and the Bolton family for what I said."

Lamar Stevens, now with the NBA's Cleveland Cavaliers, was among players who came out in support of Chambers, and player Jamari Wheeler said on his Twitter account that Chambers had apologized to Bolton the same day, and that he apologized to the team the following day.

Brockington said he and other players were interviewed by investigators, but as the summer wore on, the issue seemed to dissipate.

He did recall a meeting with Chambers as part of a five-player leadership council that seemed odd, where he had told the players that they needed to stick together.

They asked Chambers about the investigation.

"There's still kind of on me about it or whatever," Brockington said Chambers told them.

The next day, Brockington and other players went to meet with the administration about whether Chambers was going to still be the coach or not.

“We went to the AD (Sandy Barbour])and the assistant AD,” Brockington said. “And we were like, ‘Should we be worried about anything? He’s still gonna be our coach, right?'

"... They kind of said no official decision had been made."

The next day, Oct. 21, 2020, Chambers announced his resignation after the school said new allegations of inappropriate behavior had been discovered, without detailing them.

Chambers was gone after nine seasons and a 148-150 record.

"I can't deny that he made a mistake and he made a mistake that looks really bad when you explain it in the media and stuff like that," Brockington said. "I see how the school couldn't tolerate having their program viewed like that.

"As players, we felt like it was more about protecting the school's image than us. When you asked all of the players, did we want him to stay? Obviously we wanted him to stay. And how did we feel about him? We knew what type of person he was."

Players were unhappy, but with the 2020-21 season about to start, they stayed, then several transferred after that season.

"We felt kind of betrayed that they let it drag out for so long until a couple of weeks before the season starts. We felt like they did it so we all would kind of be stuck there, essentially."

After the 2020-21 season, only four players of 11 with eligibility remaining from that team were there for this season under new coach Micah Shrewsberry.

Bolton, who had initially transferred to Iowa State after leaving Penn State, is at Gonzaga, which lost to Arkansas in the Sweet 16 on Thursday night.

Brockington said he definitely would have stayed if Chambers had still been the coach, and thought others would have as well.

"... It was definitely hard to see him go, because we all wanted him to stay. It was just a shame that it ended like that."

Chambers and Brockington have stayed in contact throughout, even when Chambers was an assistant at La Salle this season.

"He'll text me and we'll text back and forth and stuff like that, and just like about what my experience is here, and he'll tell that he's proud of me, and that he loves seeing what I'm doing. He loves seeing that I'm at a place where I can show all of what I can do to the world really. We've definitely been in contact."

Continuing staying in contact Brockington believes is indicative of what kind of coach and person Chambers is.

"It never really stopped having a good personal relationship with him," Brockington said. "I feel like that spoke volumes just about how much he did really care about us and want to see us succeed."

Greg Hardwig is a sports reporter for the Naples Daily News and The News-Press. Follow him on Instagram, Facebook and Twitter: @NDN_Ghardwig, email him at ghardwig@naplesnews.com. Support local journalism with this special subscription offer at https://cm.naplesnews.com/specialoffer/