GREENSBORO, N.C. — As the Iowa State men’s basketball team was closing in on an NCAA Tournament second-round win over Wisconsin on March 20, Alison Lacey kept busy in the stands of the Fiserv Forum in Milwaukee, Wisconsin.

Lacey, a former basketball star for the Cyclones, was trying to follow the women's game , watch the men's game coached by her husband T.J. Otzelberger and find a way to keep their daughter Olivia occupied.

“I was actually coloring and checking stats (of the women's game) and sometimes looking up at T.J.’s game,” Lacey said.

MORE: What does Ashley Joens' pro potential look like?

The Cyclones booked not one, but two trips to the Sweet 16 with the men's and women's programs picking up second-round wins that evening. Lacey, who has ties to both teams, was able to celebrate both big wins with two Iowa State teams going to the Sweet 16 for the first time since 2000. 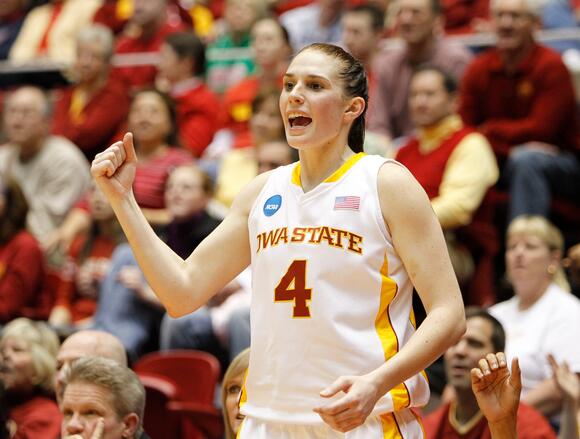 "I'm just so excited for both programs," Lacey said.

Lacey, one of the greatest players in Iowa State history, has a lot to be excited about. Over a decade after finishing her Iowa State career, Lacey remains one of the most notable players in the program's history. She scored 1,620 career points and took the Cyclones to four NCAA Tournaments, including a  trip to the Elite Eight in 2009 and the Sweet 16 in 2010.

She went on the play in the WNBA and win a title with the Seattle Storm in 2010, and she's now retired from playing. But basketball remains an important part of her life. It's what brought her back to Ames. Lacey, who first crossed paths with Otzelberger when he was an assistant for the men's team, moved back to Ames when he was named the new head coach following last season.

Their first year back in Iowa couldn't have gone much better. Otzelberger has made the Cyclones, who won just two games last season, one of the biggest surprise stories in college basketball. The women's program, meanwhile, enjoyed a historic season with a school-record 25 regular season wins. Lacey has been able to enjoy it all. She says she's watched every Iowa State women's game this season and found time to make it to two games at Hilton Coliseum.

"I just love watching this group come together and be so young and you can just tell they have a really good spark together," Lacey said.

The highlight of the season came last Sunday. The men were in the second half of their win when the women tipped off back in Ames. After the men won their game, Lacey and her kids got on a bus and waited to hop on an airplane to head back to Iowa. Lacey continually checked the live stats. Things were going perfectly for the Cyclones. They built up an early lead and rolled to an easy win over Georgia .

"It was the perfect overlap, where T.J.'s game was finishing and everyone in our group from Iowa State, the wives and the administrations, were on a high," Lacey said. "We were so excited. It was fun to carry that over and follow the women's game."

It was a monumental moment for the programs and a special one for Lacey, who had been a part of Iowa State's last Sweet 16 team back in 2010. The Cyclones won 25 games that season and Lacey was a big reason why. Despite a concussion and a three-week bout with pneumonia that kept her out of four games, Lacey earned All-Big 12 first-team honors and led the team in scoring, averaging 15.8 points per game.

"It literally feels like a lifetime ago," Lacey said.

Lacey said most of that final season is a blur to her and that her four seasons at Iowa State tend to blend together. But she still understands the importance of what her teams were able to accomplish over a decade ago. Lacey said she remembers the Iowa State coaching staff talking to her teammates about the success of previous teams. Now her teams are the ones being talked about.

"If you're a part of a team that goes to the Sweet 16, there's so few of them, that you kind of get moved to maybe a different group that is remembered more," she said. "You're just kind of put into a different group and you're a team that's going to be talked about by the coaches for a long time."

The excitement isn't over. This season's team now has a chance to advance to the Elite Eight for the first time since Lacey's playing days. The men also have an opportunity to continue their remarkable run through the postseason. And later this year, Lacey will be inducted in the Iowa State Athletics Hall of Fame.

"We could not have written this any better if we tried," Lacey said. "It's just surreal and we're loving every moment of it."

Tommy Birch, the Register's sports enterprise and features reporter, has been working at the newspaper since 2008. He's the 2018 and 2020 Iowa Sportswriter of the Year. Reach him at tbirch@dmreg.com or 515-284-8468. Follow him on Twitter @TommyBirch .