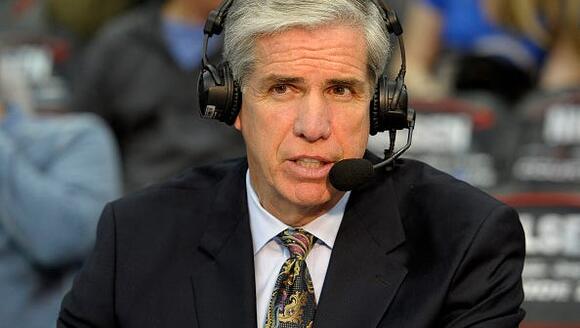 PHILADELPHIA — The texts started hitting Jim Spanarkel’s phone as soon as the buzzer finalized Saint Peter’s stunner of Kentucky in the first round of the NCAA Tournament.

“A lot of guys were messaging me saying, ‘Can you believe this? I can’t believe they just pulled this off,’” he said.

Some of those guys were from Jersey City, Spanarkel’s hometown. They grew up in the shadow of Saint Peter’s, the “Harvard on the Boulevard.”

Of course, Spanarkel couldn’t immediately reply. He was courtside for CBS, serving as the network’s analyst for a game that instantly entered Big Dance lore. Then he called the Peacocks’ second-round win over Murray State and, this weekend, is in Philadelphia for the Cinderella story’s Sweet 16 clash with Purdue.

For a North Jersey lifer — Spanarkel attended Hudson Catholic High School and lives in Bergen County now — the way this unfolded has been nothing short of serendipitous.

“Any game I do, you have to be objective, but knowing the school as well as I do, and obviously the city itself and the area, and all the people I know who have gone to Saint Peter’s, it was just a blast to be able to do it,” he said. “To see any team (seeded) 15th get this far is a big deal, but there’s a little extra oomph, an extra significance knowing Jersey City and the area as well as I do.”

RUN BABY RUN: The story behind the best home-court name in college hoops

“For young guys to be doing that was a great experience,” Spanarkel said.

One of the pros he played against in the JSBL was Elnardo Webster, the star of Saint Peter’s celebrated “Run Baby Run” squad of 1967-68. Webster died Tuesday at age 74. Several of his Saint Peter’s teammates have chartered a bus to Philly for the Sweet 16 game.

“I’ve gotten to know a handful of those guys pretty well over the years — (former Peacocks guard) Tom Mac Mahon always reminds me that they beat Duke in the NIT,” Spanarkel said. “The kid in all of them will come out this weekend.”

Spanarkel helped lead Duke to the 1978 NCAA Tournament title game under head coach Bill Foster, who had coached Rutgers basketball to its first taste of success a decade earlier.

“Bill was a terrific man, great to play for,” Spanarkel said. “It was never about him. It was always about the team.”

Nostalgia aside, the analyst in Spanarkel is not going to sugar-coat Saint Peter’s chances to advance.

“Purdue is big and they can shoot it,” he said. “They’re better than Kentucky.”

“They seem to have this swagger about them,” Spanarkel said. “Not overconfidence, but a, ‘Hey, we’ve won two games, we’re here, and we deserve to be here. So why not?’”

Speaking of swagger, Spanarkel saw the viral image of his younger self juxtaposed next to that of Peacocks guard Doug Edert.

“Yeah,” he said. “The wonderful mustaches that we’ve both had.”

Jerry Carino has covered the New Jersey sports scene since 1996 and the college basketball beat since 2003. He is an Associated Press Top 25 voter. Contact him at jcarino@gannettnj.com.