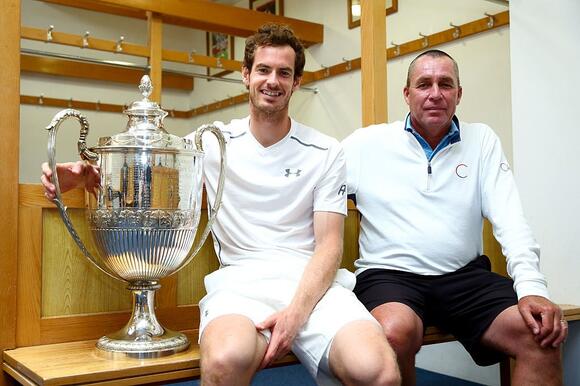 Andy Murray ’s reunion with coach Ivan Lendl was a surprise, Serena Williams’ coach Patrick Mouratoglou has said, but it would be a fitting way to end his career.

Murray won all three of his grand slam titles under Lendl, including his historic Wimbledon title in 2013, and the 34-year-old has appointed him for a third spell.

The pair begin working together this month following tournaments in Indian Wells and Miami as Murray looks to climb up the rankings ahead of the grasscourt season.

“To win three slams is incredible with Roger, Rafa and Novak playing, to reach No1 in the world with those three guys playing is also incredible. He’s shown how dedicated he is to this game, an incredible fighter. It’s always exciting to work with guys like that so I can understand that Ivan is doing that. And I think it’s great because they’ve made wonders in the past together.

“For them to end the career together, I think it’s very nice.”

Murray, who is ranked 84 in the world, announced a split from long-time coach Jamie Delgado in December and recently had spells with Jan De Wit and Dani Vallverdu.

The Scot first appointed Lendl in 2012 and the Czech-American, who is an eight-time grand slam champion, played a key role in Murray’s first major title at the US Open that year.

Murray and Lendl first split in 2014 but resumed their partnership in 2016 as Murray won a second Wimbledon title and finished the year as world number one.

Lendl left Murray’s team at the end of the 2017 season, with the two-time Olympic champion since suffering several injury set-backs and undergoing career-saving hip resurfacing surgery.

Murray has said he plans to skip the clay court season in order to prepare for Wimbledon and he will work with Lendl on an extended training block in April.

In announcing the plans, Murray’s team said Lendl’s return will be followed by the appointment of an additional coach who will travel with him to tournaments.

Lendl, who had a spell coaching world number three Alexander Zverev between 2018 and 2019, previously split with Murray in order to spend less time travelling on the tour.

Fans of the former world number one will hope Lendl’s return is a boost to Murray’s chances of a deep run at a grand slam, something the Scot has not managed to do since his injury comeback.

He was knocked out of the Australian Open in the second round in January, losing in straight sets to Taro Daniel, and reached the third round on his return to Wimbledon last year.