STATE COLLEGE, Pa. — When the Ohio State women’s hockey team ended its season earlier than it would have liked in the 2021 national semifinal, coach Nadine Muzerall said, “We get so fixated on this last game, and your last game is miserable unless you win the whole thing.”

At the time, she was hoping to remind her players of all they’d accomplished that season. This year, she has no such problem. There are no platitudes and reminders to look for the good. This season, there is no being miserable, only bliss.

With their 3-2 win over Minnesota Duluth Sunday, the Buckeyes completed one of the most improbable turnarounds in women’s college hockey history. In just six years at the helm, Muzerall took OSU from a sub-.500 team that finished fifth in their conference and had never qualified for the NCAA tournament to the top of the women’s college hockey world.

In 2018, Muzerall told the New York Times that when she took the head coaching job at Ohio State, she set a five-year goal for herself to match her initial, five-year contract: to make a Frozen Four.

Instead, she accomplished that goal in just two years and refocused on a bigger prize. Now six years into her tenure as a Buckeye, the team has reached the kind of heights that once seemed impossible — even to Muzerall.

After Sunday’s win, Muzerall told reporters a story that she said she’d shared with her players after their victory: When Ohio State called to talk to Muzerall about their head coach opening, she wasn’t sure she was interested. Her husband said, "Are you out of your mind? It doesn’t get any bigger than this!” Muzerall, ever the competitor, told him, "Their hockey team isn’t very good." His advice? "So change it. You have the resources to do that and the people supporting you."

If the Ohio State women’s hockey team now has resources, it’s because Muzerall demanded them and taught her players to expect them. She took the job after the two previous coaches had left under inauspicious circumstances, and she created a new culture that demanded hard work and commitment but also brought care, a feeling of family and dedication. 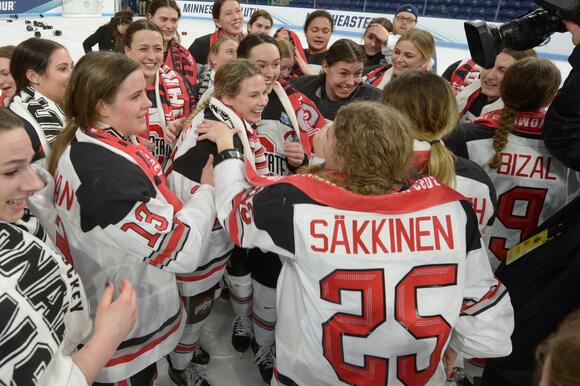 Muzerall credited the players with buying into her philosophy right away and understanding what she was looking to accomplish. Liz Schepers, who came to Ohio State the year after Muzerall, said that was easy to do.

"First and foremost, you notice how much she wants to win,” Schepers said. “The standard was set: ‘Get on board or get out of the way because we’re running with this thing.’ That family atmosphere we create, it’s a tough-love environment, but it gets the job done. It gets results.” 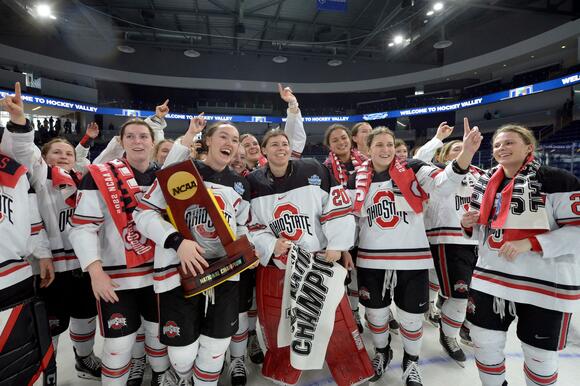 Sabau was put in charge of overseeing the women’s hockey program in late summer 2016, which included hiring a new coach. She hired Muzerall for her first-ever head coaching job, and that decision has been even better than Sabau and the hiring committee ever could imagine.

“We knew we needed to start at a new intersection of hope and family,” said Sabau. “What she's built in such a quick amount of time has just been not only tremendous for the young women's lives that she's touched and their families, but the game of hockey.”

Ohio State’s success this season came in part thanks to eight transfer students who joined the team in the offseason. Their impact was felt throughout the season, but especially in the title game, in which two transfers, Clair DeGeorge and Kenzie Hauswirth, scored to lead the Buckeyes to their first-ever championship. 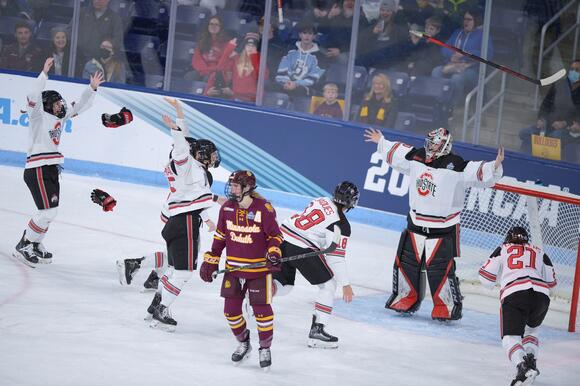 DeGeorge said she based her decision to transfer from WCHA opponent Bemidji State to Ohio State on Muzerall's ability to develop players.

It’s been an incredible six years that created a program to be reckoned with on a national scale. Schepers said there’s now a culture and a standard attached to what it means to put on an Ohio State women’s hockey sweater.

It was an improbable path from obscurity to best in the country, and Muzerall herself called it a Cinderella story.

“Impossible is nothing for Nadine,” said Sabau.

Ohio State’s athletic department reported revenue surpassing a quarter of a billion dollars during the 2022 fiscal year as it rebounded from the decline posted during the height of the coronavirus pandemic. The department revealed Thursday that it pulled in $251.6 million over the fiscal year spanning from July 1, 2021, to June...
COLUMBUS, OH・2 DAYS AGO
The Columbus Dispatch

WEST LAFAYETTE, Ind. — Tom Izzo will see Zach Edey posting up in his nightmares for quite a while. Purdue’s star big man and national player of the year candidate dominated Michigan State basketball for the second time in less than two weeks Sunday. Edey finished with another career high with 38 points as the top-ranked Boilermakers cruised to a 77-61 victory over the Spartans at Mackey Arena. ...
WEST LAFAYETTE, IN・15 MINUTES AGO
The Columbus Dispatch

In a vote that ended Jan. 27, Dispatch.com readers selected the Athlete of the Week for competitions that took place from before Jan. 22. The winner is Gahanna basketball player Clarke Jackson. Jackson had 52 points, 16 rebounds, eight steals, and four assists in two games. She had 30 points,...
COLUMBUS, OH・1 DAY AGO