Sabres send Robert Hagg to Florida for sixth round pick 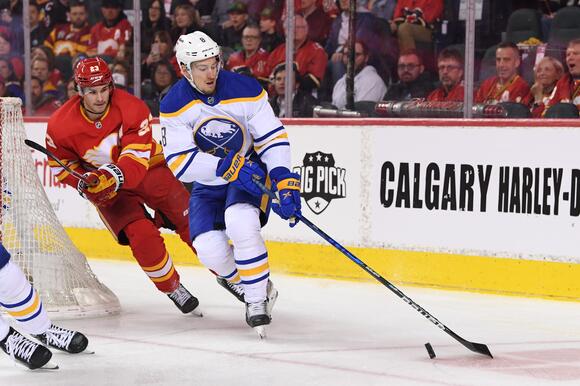 Buffalo, N.Y. (WGR 550) – With the NHL Trade Deadline coming Monday afternoon at 3 p.m. ET, the Buffalo Sabres got the jump on Sunday, trading defenseman Robert Hagg to the Florida Panthers for a sixth round pick.

The pick was originally acquired from the Calgary Flames in the Sam Bennett trade.

In July, Buffalo acquired Hagg, along with a first round pick (Isak Rosen) and a second round pick from the Philadelphia Flyers for Rasmus Ristolainen. Hagg is scheduled to become an unrestricted free agent after this season.

Florida is in need of a defenseman as Aaron Ekblad has been placed on long-term injured reserve thanks to a leg injury. He is expected to be back at some point early in the playoffs.

That gives the Panthers two former Sabres defensemen, as Brandon Montour was traded there last season.

Hagg is a good shot blocker, hitter and penalty killer. He has his limitations playing 5-on-5, but can usually play pretty well on a third pairing. Hagg played 48 games with the Sabres, scoring a goal and seven assists for eight points, while averaging just over 17 minutes per-game.

The Sabres wrap up their Western Canada road trip on Sunday against the Vancouver Canucks. Colin Miller will likely go back into the lineup for Hagg.

The Canucks hosted the Flames on Saturday and lost, 5-2. Vancouver has lost three of four games.

J.T. Miller is pointless in his last two games, but before that, he had points in 13-straight games, scoring eight goals and 19 assists for 27 points.

Vancouver is trying to get back into the Western Conference Wild Card race. The Canucks are five points back of the Vegas Golden Knights, who hold down the last wild card spot.

Buffalo has won five of its last eight games.

Join Brian Koziol and myself for pregame coverage on WGR starting at 9 p.m. ET.

Luukkonen shines in goal for Sabres in win over Pittsburgh

Ukko-Pekka Lukkonen made 32 saves, while three different players scored for the Buffalo Sabres in their 3-1 victory over the Pittsburgh Penguins on Saturday afternoon at KeyBank Center. Pat Malacaro has a complete game recap:
BUFFALO, NY・1 DAY AGO
WGR550

Sabres' Luukkonen was dominant in win over the Penguins.

LISTEN: McDermott: Lamar Jackson at another level with his game

Buffalo Bills head coach Sean McDermott joined the “Extra Point Show” with Sal Capaccio and Joe DiBiase for his weekly appearance on WGR. Here’s some of what he had to say ahead of Buffalo’s matchup with the Baltimore Ravens:
BUFFALO, NY・2 DAYS AGO