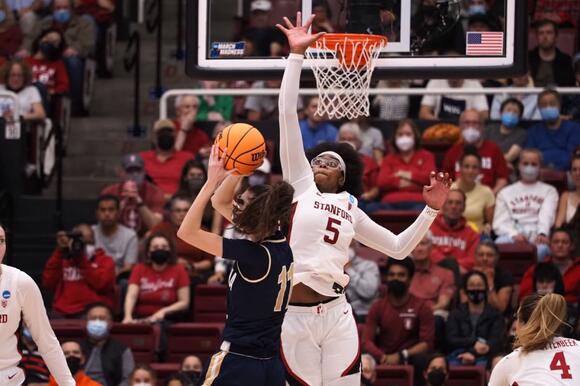 The Stanford forward made a ridiculous coast-to-coast play in a blowout first round win for the Cardinal.

No. 1 seed Stanford rolled over No. 16 seed Montana State 78–37 on Friday to easily cruise to the second round of the NCAA women’s basketball tournament.

Stanford forward Fran Belibi finished with 12 points in the contest, including this highlight play that captivated the crowd at Stanford’s Maples Pavilion.

Belibi’s block was one of two that she had on the day, and her coast-to-coast dunk sent the crowd in a frenzy as the Cardinal extended their huge lead to 31–6 with six minutes to play in the second quarter.

Stanford held Montana State to 23.1% shooting overall from the floor and 16.7% from three in a strong defensive effort. Offensively, the Cardinal had their way with the Bobcats, making 44.6% of their attempts from the floor overall and nearly 41% of their shots from three-point range.

Next up for Stanford is No. 8 seed Kansas on Sunday, after the Jayhawks cruised to a 19-point win over Georgia Tech on Friday.

The Hawkeyes finished 123rd in the country in scoring offense in 2022.
IOWA CITY, IA・2 DAYS AGO
Sports Illustrated

A 22-Year-Old Head Coach? UNC Didn’t Think Twice About It.

Dawn Staley on Geno Auriemma Criticism About Play Style: ‘I’m Sick of It’

The Gamecocks women’s basketball coach is fed up with the disrespect toward her program.
COLUMBIA, SC・6 HOURS AGO
Sports Illustrated

Bracketology: UNC Is Barely on Right Side of the Bubble

The preseason No. 1 team is in danger of missing the field.
TENNESSEE STATE・9 HOURS AGO
Sports Illustrated

In an interview with Sports Illustrated, Parker reflected on her pioneering role, her decision to join the Aces, the Kyrie Irving trade and working with Shaq.
TENNESSEE STATE・1 DAY AGO
Sports Illustrated

Football didn’t work out for Bron Breakker but he’s an emerging star in WWE.
GEORGIA STATE・1 DAY AGO
OnlyHomers

Teammates and coaches are mourning the loss of a former collegiate tennis star who died suddenly at the age of 31 over the weekend. Former University of Georgia standout Lilly Kimbell reportedly died on Sunday, according to her family. Kimbell's family says that she had been experiencing kidney issues that led to a heart attack. CPR was performed at her home and she was transported to the hospital, but her family tragically were forced to make the decision to take her off of life support.
ATHENS, GA・7 HOURS AGO
Sports Illustrated

McCaffrey on Chiefs-Eagles Super Bowl: ‘I Hope They Both Lose’

James could pass Kareem Abdul-Jabbar with a big Tuesday night, but the odds point to Thursday’s game as the record-breaker.
2 DAYS AGO
Sports Illustrated

The new Broncos coach reportedly had no desire to work with the two-time Pro Bowler.
DENVER, CO・3 HOURS AGO
Sports Illustrated

The Fighting Irish are seeking a replacement for Tommy Rees, who left for Alabama on Friday.
SOUTH BEND, IN・1 DAY AGO
Sports Illustrated

Uh, what?
8 HOURS AGO
Sports Illustrated

The forward is set to become the NBA’s all-time scoring leader.
1 DAY AGO
Sports Illustrated

The Minnesota tight end weighed in on the heartbreaking ending to the team’s 2022 campaign.
MINNEAPOLIS, MN・3 HOURS AGO
Sports Illustrated

The NBA’s Next All-Time Scoring Champ Could Be ...

Who could eventually surpass LeBron James, if anyone?
19 HOURS AGO