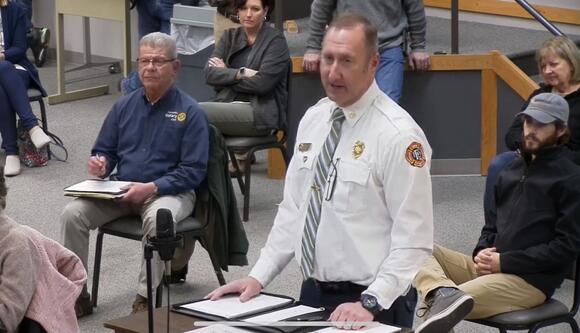 Gates retired at the end of 2021, and O’Hearn and the city’s other assistant chief, Nick Christensen, had been splitting the chief’s duties since the start of this year.

O’Hearn, 50, started his career as a firefighter with the Pocatello Fire Department in 2002. Since then, he has been steadily rising in rank, becoming a captain in 2014 and assistant chief in 2020.

“It’s very rewarding,” O’Hearn said of serving on the fire department. “It gives us at all levels an opportunity to serve the community, which I think is what draws us to this field of work. No two days seem to ever be the same.”

O’Hearn was born and raised in Pocatello and graduated from Highland High School. He went on to attend Idaho State University, where he earned a bachelors of arts and a certificate in paramedic science.

“I was really interested in the medical field at the time and the fire department runs the paramedic service,” O’Hearn said. “I really enjoyed the fire component as well as the EMS component and just knew this is what I wanted to do for the rest of my career.

He later returned to ISU and earned a master’s in public administration in 2010.

Though becoming a fire chief wasn’t a certainty, O’Hearn said he started focusing on that goal about 15 years ago when he started working on his masters.

“It was something I was interested in and wanted to prepare for,” O’Hearn said.

In January, the department implemented a new schedule that he believes has been working extremely well. Firefighters work back-to-back 24-hour shifts and then have 96 hours off. He believes the schedule has reduced employee fatigue.

“It provides for more consistent time off for recovery with less coming and going,” O’Hearn said. “Individuals seem to be able to get more quality rest.”

O’Hearn believes he’s taking over a department that’s moving in a positive direction.

“I am very excited about our group of people. We have an excellent group,” O’Hearn said. “I think morale is good. I think through (union contract) negotiations this year they came out with an agreement the local and the city were both satisfied with and I think we’ll continue on that momentum with the schedule change and the other things we’re doing.”

Looking ahead, O’Hearn one of the department’s focuses will be on public outreach, which has been scaled back amid the pandemic. For example fire safety presentations to local school students have been done lately via Zoom. O’Hearn is eager to resume doing those in person.

“We look forward to being able to engage face to face more with the community,” O’Hearn said. “Prevention is a key component. If we can prevent an emergency, that’s better than mitigating an emergency.”

The department employs 91 full-time employees and a part-time worker.

Mayor Brian Blad credits O’Hearn with working closely on the schedule change with the fire union. Blad said the schedule the department has chosen has been proven throughout the country.

POCATELLO — A fire at the former Naval Ordnance Plant on the city's north side could have been much worse if not for Pocatello's assistant fire chief being at the right place at the right time. Shane Grow, who's been with the Pocatello Fire Department for over 20 years, spotted smoke billowing from the plant, now known as the Titan Center, while driving home from work around 5 p.m. Thursday. ...
POCATELLO, ID・22 HOURS AGO
Idaho State Journal

A Wrangler's Reckless Writings: Volunteers with a smile

While taking my finger off the chainsaw trigger, and letting the saw coast to a stop, I lowered the bar too close to my leg and felt the saw chain cut about one inch below my kneecap. As an RN I’d seen a thousand chainsaw injuries. I managed to expose the wound and then wrapped a sock, which I found in the back seat of the truck, around my leg. The sock seemed to control the bleeding, so I proceeded to pick up my plunder and head for home.
POCATELLO, ID・5 HOURS AGO
Idaho State Journal

POCATELLO — Motorists wishing to get from Interstate 15 northbound to Interstate 86 no longer have to detour through the Northgate Interchange. The northwest ramp reopened Wednesday morning after three weeks of construction. According to a news release from the Idaho Transportation Department, “The detour was needed to lower the ramp so new bridges can be built for I-15 through the System Interchange.” The System Interchange will replace the current,...
POCATELLO, ID・2 DAYS AGO

POCATELLO — Two Simplot contract employees were injured following a minor ammonia release at the Don Plant early Tuesday morning, Simplot reported. The plant was evacuated because of the ammonia release but there was never any threat to the public, the Boise-based company stated. Simplot said the contract employees had minor injuries. One suffered bruises during a fall that occurred when the plant was evacuated while the other had a...
POCATELLO, ID・2 DAYS AGO
Idaho State Journal

POCATELLO — What do Hugh Jackman, "The Music Man" and a passion for your work have in common? They were all topics that Portneuf Medical Center’s CEO Jordan Herget touched on at the CEO Breakfast Series presented by Pocatello-Chubbuck Chamber of Commerce and Regence BlueShield of Idaho on Wednesday at Idaho State University. Herget, who became PMC’s CEO in August of 2020, was the keynote speaker of the event and...
POCATELLO, ID・5 HOURS AGO
Idaho State Journal

This week at the Bannock County Event Center

Pocatello mayor shortens list of City Council candidates down to 13

Pocatello Mayor Brian Blad has narrowed the list of potential new City Council members to 13, according to a Monday news release from the city. Two of those applicants will be picked to fill seats 2 and 3, which were vacated by Claudia Ortega and Roger Bray, who resigned along with Christine Stevens effective Sept. 1. Retired Pocatello Police Chief Scott Marchand was selected by Gov. Brad Little to fill...
POCATELLO, ID・4 DAYS AGO
Idaho State Journal

POCATELLO — The JRM Foundation for Humanity had to halt its fundraising efforts for two years due to the COVID-19 pandemic, but the nonprofit is now making a strong comeback. In September, they not only celebrated the return of the Idaho Hometown Hero Medal Ceremony, which marked its 10th year, but they also held a sold-out fundraiser gala and a charity expo highlighting their work along with their community partners. They also created three new scholarships. ...
POCATELLO, ID・3 DAYS AGO
Idaho State Journal

What to do this week in East Idaho

Check out this week’s events happening in East Idaho. Wednesday Wanderlust Craft Beer Taproom & Wine Bar, 1799 Hurley Drive, Suite A, in Pocatello, will host a wine tasting from 6 to 8 p.m. Wednesday. Every Wednesday, Load ‘em in the Dark Cattle Co. hosts Team Roping from 6 to 10 p.m. in the Indoor...
POCATELLO, ID・3 DAYS AGO
Idaho State Journal

A California man was arrested Monday after he reportedly admitted to transporting more than 12 pounds of marijuana to East Idaho. Loren Ralph Denny, 53, also reportedly told an Idaho State Police trooper he grew the marijuana himself and brought it with him while looking to move into Blackfoot. The trooper was called to an incident involving an officer from Idaho Fish and Game at Ryder Park Ponds in Idaho...
BLACKFOOT, ID・2 DAYS AGO

POCATELLO — Portneuf Medical Center recently reached two different milestones in heart care. The first milestone was reached back in August when the hospital's heart and vascular team reached 100 Watchman procedures completed, according to a press release from the hospital. The Watchman is a device that is implanted in the heart to help prevent a stroke in patients with Atrial Fibrillation (AFib). The device is secured inside the heart...
POCATELLO, ID・1 DAY AGO
Idaho State Journal

One man died and eight other people were injured in four separate wrecks in East Idaho over the weekend, according to news releases from local authorities. Killean Taylor, 31, of Blackfoot, died and two women were seriously injured after being ejected from an SUV when it crashed on a rural road east of Blackfoot in a 12:55 a.m. Sunday wreck, according to the Bingham County Sheriff’s Office. Taylor died at...
BLACKFOOT, ID・4 DAYS AGO
Idaho State Journal

Two people were recently arrested and charged with felonies after police say they battered people with weapons during separate incidents in East Idaho this month. Jacob Wesley Mack, 22, of Woods Cross, Utah, has been charged with felony aggravated battery and felony attempted strangulation following an incident that began to unfold in Lava Hot Springs around 1:50 a.m. Saturday. Bannock County Sheriff’s Office deputies were dispatched to a motel on...
LAVA HOT SPRINGS, ID・1 DAY AGO
Idaho State Journal

FORT HALL — An adult and two juveniles were injured in a two-vehicle crash on the Fort Hall Reservation Saturday night. The 8 p.m. crash involved two compact SUVs on Highway 91 just north of Sheepskin Road, Idaho State Police said. The injured adult was transported via ambulance to Portneuf Medical Center in Pocatello while the two injured juveniles were transported via ambulance to Bingham Memorial Hospital in Blackfoot, state...
FORT HALL, ID・4 DAYS AGO

POCATELLO — The family of a local man who took his own life last month worked to raise awareness and to destigmatize the social phenomenon as suicide awareness month comes to an end. Dallin Overmeyer died of suicide on August 27 when he crashed his car on Interstate 15 in Pocatello. The car overturned and caught fire and Overmeyer, who was not wearing a seatbelt, was pronounced dead at the scene of the crash. Overmeyer penned a suicide note that was posted to Facebook just...
POCATELLO, ID・23 HOURS AGO
Idaho State Journal

IDAHO FALLS — Two animals are deceased and one was transported to a veterinarian clinic following a mobile home fire Wednesday evening. There were no injuries to civilians or first responders. At 5:11 p.m. the Idaho Falls Fire Department and Idaho Falls Police Department were dispatched to the Shady Rest Campground at 2200 N. Yellowstone Highway for a report of a fire inside of a mobile home. The reporting party was unaware if there was anybody inside the home at the time of the fire. ...
IDAHO FALLS, ID・1 DAY AGO
Idaho State Journal

How Highland is managing a rash of injuries — under lofty expectations

At the beginning of last week, Rhidge Barela felt excitement flood through him. He was on the mend from a potential head injury, which he had sustained in his Highland club’s last game, and the next one was a big one: On the road at Meridian, one of the single best teams in the state, and the Rams could sure use their junior wideout. “I was like, I can’t miss this,” Barela said. ...
POCATELLO, ID・1 DAY AGO