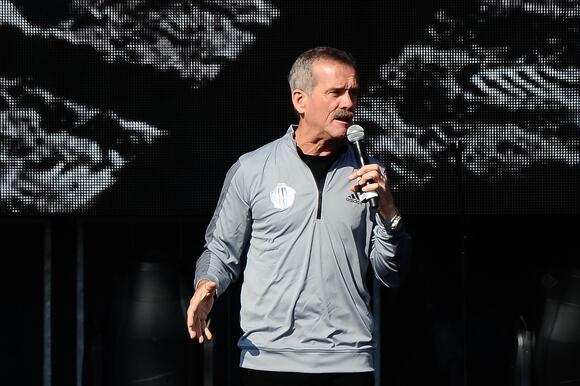 Besides being an astronaut, Chris Hadfield is a celebrity. The engineer, musician and former Canadian Air Force pilot wowed us a few years ago with his rendition of David Bowie's “Space Oddity” from the International Space Station (ISS) . During his career at NASA he was part of two missions to space (STS-74 and STS75) and later spent more than four months on the ISS where he had enormous media exposure.

Although Hadfield is a retired astronaut, he remains involved with space exploration and does various science outreach activities. In addition, he advises the Californian startup Astrolab , which has developed a prototype of a rover to explore the Moon as part of the Artemis missions that NASA has scheduled for the near future.

The vehicle, called FLEX , has the capacity to carry 1.5 tons and has been designed with the idea of assisting space explorers in possible stays on both the Moon and Mars. It can be controlled remotely or in person and can carry two people.

In recent days, Astrolab released a video in which Chris Hadfield can be seen testing the vehicle in Death Valley, California, due to the similarity that the desert terrain has with the Moon and Mars. In the video, the retired astronaut explains that the future of space exploration is closely linked to mobility and that vehicles like the FLEX are essential if you think that there could soon be people living on the Moon or other planets.

ABOUT ARTEMISA AND THE SPACE MISSIONS

In Greek mythology Artemis is the goddess of the hunt, the Moon and nature. Daughter of Zeus and Leto, she is the sister of Apollo and is one of the twelve deities that inhabit Olympus. She is depicted as a huntress carrying a bow and arrows and NASA chose her name for their next (and ambitious) space missions that have as one of their goals to take the first woman and the first person of color to the moon to keep exploring its surface. Artemis is an international program led by NASA, but in which, in addition to the United States, the space agencies of Japan, Canada, Brazil, Australia and Mexico also participate.

The manned mission to the Moon is scheduled for the year 2024.

Poynter sat down with Entrepreneur to discuss 30 years in the male-dominated aerospace sector and her latest endeavor, Space Perspective, the company striving to send more people to space than ever before.
AEROSPACE & DEFENSE・1 DAY AGO
Outsider.com

Researchers using a robotic sailboat to venture inside the terrifying eyewall of a Category 4 hurricane sounds like the plot of the newest disaster film. But believe it or not, it’s not only real, it’s happening right now. On Thursday, researchers sent a Saildrone into the heart of Hurricane Fiona, and the footage it captured was absolutely unreal.
ENVIRONMENT・1 DAY AGO
The Guardian

The owner of 21 tropical islands off the coast of Papua New Guinea says he never threatened to sell them to China and his main aim is to save the turtles that nest there. Ian Gowrie-Smith, an Australian businessman and investor, bought the Conflict Islands, which lie less than 1,000km from the Australian coast, almost two decades ago.
PETS・20 MINUTES AGO