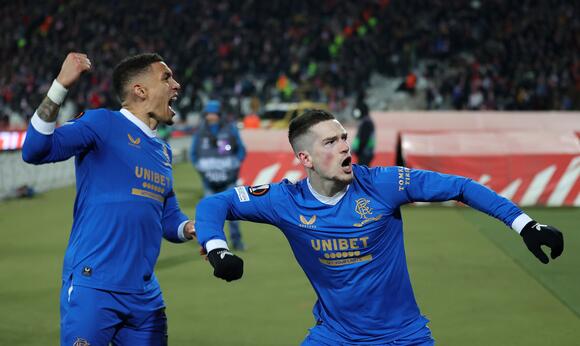 Red Star made inroads on Rangers‘ three-goal first-leg lead when Mirko Ivanic netted in the 10th minute and Allan McGregor made several excellent stops for the visitors.

However, Kent broke brilliantly to level the score on the night in the 56th minute in what proved the key moment of the second leg.

Rangers looked to be seeing the game out comfortably when Ben Nabouhane netted a stoppage-time penalty but it was too little, too late for the hosts as Gers won 4-2 on aggregate.

Rangers manager Giovanni van Bronckhorst, whose side could face the likes of Barcelona, Braga and Atalanta in the last eight, went with the same starting line-up that won 3-0 at Ibrox seven days earlier, suggesting he saw scope for more goals.

The Serbian champions also went into the game with the knowledge that they could cause Rangers problems after having three goals disallowed for close offside decisions in Glasgow as well as hitting the bar and having a penalty saved by McGregor.

Alfredo Morelos had an ambitious effort saved for Rangers before Red Star got the early goal they craved.

The hosts worked a two-against-one from a short corner and the resulting cross bounced in the Rangers box before Ivanic had time to chest down and fire home.

The goalscorer soon had another good chance after Red Star cut through the heart of the Gers defence but McGregor made an excellent stop.

Gers soon had a let-off midway through the half after Leon Balogun and Calvin Bassey got in each other’s way from a long ball. Milan Pavkov scuffed his effort wide with only McGregor to beat.

McGregor was warned about time-wasting from the resulting goal-kick but Rangers settled down and Morelos had a weak shot saved when Kent looked to be in a better position.

McGregor kept Rangers two ahead with an excellent diving stop from Cristiano Piccini in the final minute of the half.

Rangers withstood some pressure early in the second half. McGregor had to look lively to stop a corner which bounced at his near post and soon made a more comfortable save from Ivanic.

Red Star had a great chance when Omoijuanfo held off Bassey and tried to set up Pavkov for an open goal but got the pass wrong. McGregor soon saved from Omoijuanfo before Rangers got the goal that settled matters.

Kent continued his run after passing to Glen Kamara on the halfway line and the Finland midfielder’s flick sent the winger on his way. The chasing Piccini pulled his hamstring which gave Kent a free run to the box and his shot took a deflection and looped over the goalkeeper.

Ivanic missed a good chance and McGregor made another few saves but Rangers looked comfortable even after losing Morelos and John Lundstram to what looked minor injuries.

Substitute Kemar Roofe had a chance to put Rangers ahead but saw his shot saved at the near post.

Red Star were given a slight glimmer of hope when Kamara stretched at a loose ball in the box and caught Filippo Falco to allow Nabouhane to score.

There were some angry scenes after the game when some Red Star players appeared to take exception to Connor Goldson’s celebrations but matters were calmed.

Wilfried ZahaIf you plumped for Zaha on a wildcard recently, the forthcoming fixtures are what you had in mind. With the tricky visit of Chelsea out of the way, Crystal Palace now embark on a run that sees them play most of the bottom half between now and the World Cup.Some will be trickier than others - Leeds, who are next up, are not the wide-open defence of old - but Zaha will be hoping to build on a good individual start to help lift Palace up the table and is a great medium-term option.Leandro TrossardFair enough, it’s a bit...
PREMIER LEAGUE・1 HOUR AGO
The Independent

What the papers sayErling Haaland is the highest paid player in the Premier League, according to a report in the Mail. The 22-year-old striker has taken the league by storm since joining Manchester City in the summer and is reportedly on a basic salary similar to other top players. But the paper reports his bonus clauses see his weekly wage surge beyond £850,000.The Mirror reports on speculation that Manchester United will bid for Borussia Dortmund’s 19-year-old midfielder Jude Bellingham. Bellingham is also said to be a target for Real Madrid and Liverpool, but former United player Rio Ferdinand has urged...
PREMIER LEAGUE・45 MINUTES AGO
The Independent

When Everton and Manchester United last met, a solitary goal separated them. As they prepare to reconvene at Goodison Park on Sunday, there is one goal between them again. Everton have conceded seven, United six. The difference is that, between them, Jordan Pickford and Asmir Begovic have had to retrieve the ball from the back of their net seven times this season. Last Sunday, David de Gea was beaten on six occasions in one afternoon.Strange as it would have sounded a few months ago, Everton have the Premier League’s best defensive record. They are the only team who have only...
PREMIER LEAGUE・56 MINUTES AGO
The Independent

West Ham boss David Moyes believes his side are showing signs of getting back to their best after a 1-0 Europa Conference League win at Anderlecht.The Hammers saw Gianluca Scamacca climb off the bench to score the winner in the 79th minute and put them in firm control of Group B.The £35million signing did the damage nine minutes after coming on, but the Hammers could have had it wrapped up long before then in Belgium.Moyes’ side have looked a shadow of the team who almost finished in the Premier League’s top six last season so far this term, but, building...
PREMIER LEAGUE・8 HOURS AGO

Erik ten Hag praised his substitutes after Marcus Rashford scored two and set up fellow introduction Anthony Martial as Manchester United escaped a scare at Omonia Nicosia in the Europa League.Wounded by Sunday’s 6-3 derby defeat at Manchester City, the Red Devils were stung in Cyprus after making a strong start as the hosts capitalised on lax defending to go ahead through Karim Ansarifard.Omonia scored after Tyrell Malacia was dispossessed having collected a pass from ineffective Jadon Sancho following a clear free-kick, with Ten Hag replacing them with Luke Shaw and Rashford at half-time.The latter would go on to score...
PREMIER LEAGUE・8 HOURS AGO
The Independent

Warrington half-back George Williams will captain England in their World Cup warm-up match against Fiji on Friday, team management have confirmed.The former Wigan and Canberra Raiders playmaker will cover for first-choice skipper Sam Tomkins, who is being rested by coach Shaun Wane.The clash at Salford’s AJ Bell Stadium is England’s final outing before they face Samoa in their tournament opener at St James’ Park in Newcastle on October 15.Williams, 27, said: “It’s an unreal feeling. I think it will be the pinnacle of my career to captain my country. It is massive for me, my family and everyone who has...
RUGBY・56 MINUTES AGO
The Independent

At least one person died while police clashed with soccer fans trying to push into an Argentine league match Thursday night, and the referee stopped the game as clouds of tear gas spread inside the stadium.Authorities and witnesses said fans of the home team, Gimnasia y Esgrima, struggled to enter an already full stadium, and police fired rubber bullets and tear gas trying to get the crowd to retreat.The incident came less than a week after the use of tear gas outside a soccer match in Indonesia set off a stampede that left 131 people dead.Nine minutes into Thursday...
FIFA・3 HOURS AGO
The Independent

Jess Fishlock: Winning goal was a moment dreams are made of

Jess Fishlock admitted her World Cup play-off winner for Wales against Bosnia and Herzegovina was a moment that she could only dream about.Fishlock’s spectacular extra-time volley gave Wales a 1-0 victory at the Cardiff City Stadium as the Dragons advanced to a European play-off final in Switzerland on Tuesday.If Wales overcome that obstacle, they will probably face an inter-continental play-off in February to qualify for next summer’s Women’s World Cup in Australia and New Zealand.SGÔR TERFYNOL 🏴󠁧󠁢󠁷󠁬󠁳󠁿1-0🇧🇦FOR US. FOR THEM. FOR HER.#BeFootball | #TogetherStronger pic.twitter.com/iavkEjMaeq— Wales 🏴󠁧󠁢󠁷󠁬󠁳󠁿 (@Cymru) October 6, 2022Fishlock said: “It was one of those moments you kind...
WORLD・8 HOURS AGO