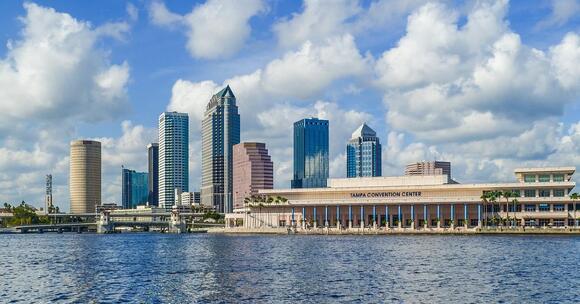 This week, U.S. Rep. Gus Bilirakis, R-Fla., announced that all ten of the community project funding requests he submitted this year were approved.

These projects will bring a total $13.79 million in federal funding to the Tampa Bay area. When this year’s application process opened, Bilirakis received dozens of roposals from local governments, municipalities, and non-profit organizations throughout the state of Florida.

The funds headed to Florida’s 12th Congressional District, include:

Bilirakis weighed in this week on the funds.

“While I am no proponent of big government spending, I have a duty to ensure my community receives its fair share of allocated federal resources and to be transparent about my efforts to prioritize these important projects. These projects will help strengthen our local infrastructure, benefit our community and assist local residents, ” said Bilirakis.

FMEA: Most Floridians, Including 98 Percent With Outages After Hurricane Ian, Have Power

The Florida Municipal Electric Association (FMEA), which represents 33 public power communities across the state, which provide electricity to more than 3 million of Florida’s residential and business consumers, offered an update on Monday as Florida recovers from Hurricane Ian. In less than a week after Hurricane Ian made...
FLORIDA STATE・22 HOURS AGO
FloridaDaily

Farm Share, one of Florida’s leading food nonprofits and the state’s largest independent food bank, announced that it has sent 11 semitrucks loaded with water, food, and disaster relief supplies to communities affected most by Hurricane Ian. The Greater Fort Myers area, including Collier, Lee, and Charlotte Counties,...
FLORIDA STATE・1 DAY AGO
FloridaDaily

On Sunday, Gov. Ron DeSantis directed the Florida Department of Transportation (FDOT) to help Lee County ensure access to Pine Island by the end of the week. DeSantis authorized the FDOT “ to expedite emergency repairs to the road and bridges that provide motorists access to Pine Island” as Hurricane Ian recovery efforts continue.
LEE COUNTY, FL・1 DAY AGO
FloridaDaily

On Thursday, Florida First Lady Casey DeSantis announced that within hours of activating, the Florida Disaster Fund has received over $10 million in donations to support communities impacted by Hurricane Ian. To contribute, please visit www.FloridaDisasterFund.org or text DISASTER to 20222. “We are very appreciative and thankful for the outpouring...
FLORIDA STATE・4 DAYS AGO
FloridaDaily

AAA released a study on Sunday that shows the gas tax holiday in Florida is dramatically impacting prices at the pump. On Sunday, the average gallon of gas in Florida cost $3.26, down from $3.38 at the start of last week and well under the national average of $3.80 a gallon. This is the lowest average price of gasoline in Florida since January.
FLORIDA STATE・1 DAY AGO
FloridaDaily

Florida has no shortage of political star power. While Gov. Ron DeSantis is receiving the most attention, many current and former Florida politicians loom large. One politician who is starting to receive more buzz is Francis Suarez, the Republican mayor of Miami. In the last month, Suarez has made the rounds on conservative media to position himself as a star in the making. His increased profile has fueled speculation about his future in Florida – and even nationally. But a closer look at Suarez’s record shows he should have no place in Republican politics, because he will sell out conservative voters.
MIAMI, FL・20 HOURS AGO

A new poll from Mason Dixon shows state Senate President Wilton Simpson, R-Tribly, is likely to be Florida’s next agriculture commissioner. Simpson takes 47 percent, while accountant Naomi Esther Blemur, part of the Democratic leadership in South Florida, gets 34 percent in the poll, while 19 percent are undecided.
FLORIDA STATE・3 HOURS AGO
FloridaDaily

This week, state Attorney General Ashley Moody warned Floridians of price gouging, disaster scams and fraud in the aftermath of Hurricane Ian. Thousands of Floridians have been displaced by Ian and may be seeking food, shelter, debris removal or home repairs. Moody’s Price Gouging Hotline remains activated for consumers to report allegations of extreme price increases, as well scams related to the ongoing recovery efforts.
FLORIDA STATE・1 HOUR AGO
FloridaDaily

At the end of last week, U.S. Sens. Marco Rubio, R-Fla., and Rick Scott, R-Fla., sent a letter to U.S. Sens. Patrick Leahy, D-Vt., and Richard Shelby, R-Ala., the chairman and ranking Republican of the U.S. Senate Appropriations Committee, requesting their support in developing a disaster supplemental to provide assistance to Florida as Floridians recover from Hurricane Ian.
FLORIDA STATE・2 DAYS AGO
FloridaDaily

A new poll shows Gov. Ron DeSantis in excellent shape as he runs for a second term. Mason Dixon released a poll of likely voters showing DeSantis taking 52 percent while former Gov. Charlie Crist, who was elected governor in 2006 when he was a Republican, behind at 41 percent while 1 percent back other candidates and 6 percent remain undecided. Crist won the Democratic primary in August over state Agriculture Commissioner Nikki Fried. DeSantis faced no opposition on the Republican side.
FLORIDA STATE・5 HOURS AGO
FloridaDaily

Amy Zubaly, the executive director of the Florida Municipal Electric Association, weighed in on Tuesday on preparations for Hurricane Ian. “Since this past weekend, the Florida Municipal Electric Association has been in contact with public power communities across Florida and the country lining up mutual aid crews prepared to assist areas throughout the state affected by Hurricane Ian.,” Zubaly said.
FLORIDA STATE・6 DAYS AGO
FloridaDaily

A new poll from Mason Dixon shows state CFO Jimmy Patronis ahead of former state Rep. Adam Hatterlsey. First appointed to the post by then Gov. Rick Scott in 2017 when then CFO Jeff Atwater resigned, Patronis takes 47 percent in the poll which was released on Wednesday morning. Hattersley gets 37 percent in the poll while 16 percent are undecided.
FLORIDA STATE・2 HOURS AGO

The U.S. Department of Housing and Urban Development (HUD) announced this week that three cities in Florida will be part of the Asset Building cohort as it expands the Moving to Work (MTW) Demonstration Program. “Through this cohort, HUD will evaluate asset building activities that encourage the creation and growth...
FLORIDA STATE・5 DAYS AGO
FloridaDaily

Florida Department of Agriculture: Oriental Fruit Fly Has Been Eliminated From Pinellas County

At the end, the Florida Department of Agriculture and Consumer Services (FDACS) announced the eradication of the Oriental fruit fly, Bactrocera dorsalis, from Pinellas County. In June, the Division of Plant Industry positively identified five Oriental fruit flies detected during routine trapping. A quarantine was established in the St. Petersburg area prohibiting the movement of fruit, vegetables and nuts without a compliance agreement from the department. As of September 23, 2022, the treatment of this area for Oriental fruit fly is complete, no additional detections have been made in three lifecycles of the fly therefore, Oriental fruit fly has been eradicated and the quarantine has been lifted.
PINELLAS COUNTY, FL・7 DAYS AGO
FloridaDaily

Last week, the U.S. House passed U.S. Rep. Vern Buchanan’s, R-Fla., bill classifying the Little Manatee River as a national “scenic” river without opposition. “Designating the river as scenic would add Little Manatee River to the National Park Service’s Wild and Scenic River System, whose primary goal is to conserve free-flowing rivers across the United States,” the congressman’s office noted when Buchanan brought the bill in July 2021 after first introducing it in 2020. “The Loxahatchee River and the Wekiva River are the only rivers in Florida currently recognized under the federal program. Little Manatee River, one of the most pristine blackwater rivers in the state, begins in southeastern Hillsborough County and flows downstream into Tampa Bay and through Little Manatee River State Park.”
HILLSBOROUGH COUNTY, FL・7 DAYS AGO
FloridaDaily

At the end of last week, state Attorney General Ashley Moody sent a memo to state attorneys in all 20 judicial circuits in Florida, outlining state law requiring that no defendant charged with a theft crime committed in an area under a declared state of emergency may be released prior to a first appearance hearing.
FLORIDA STATE・1 DAY AGO